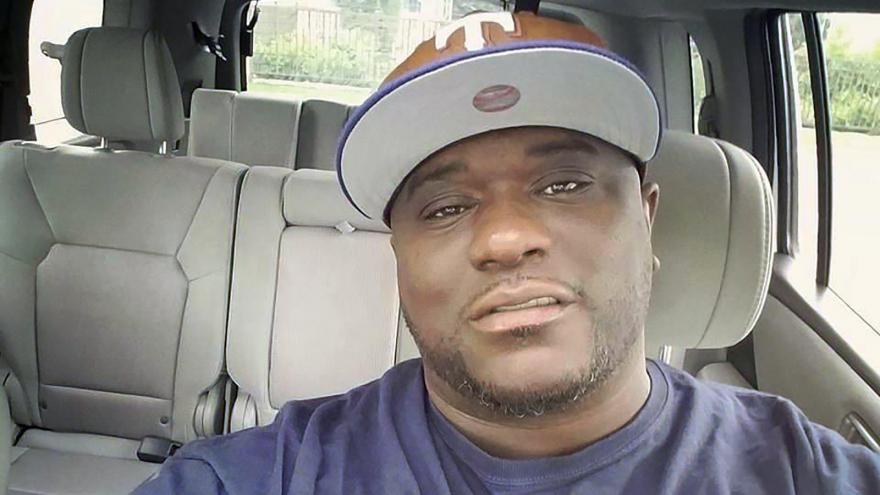 (CNN) -- Maritza Ambler couldn't watch the video that has set the nation on fire -- the footage of George Floyd pinned down with a police officer kneeling on his neck.

Ambler's son, Javier Ambler II, a Black man, was 40 when he died almost 15 months ago during an arrest by Williamson County, Texas, sheriff's deputies, after saying repeatedly, "I can't breathe."

When her sister tried to show her the video of Floyd, "I just pictured my son in that situation," she told CNN in an interview. "I said, please, you know, turn it off, shut it off," Maritza Ambler said.

"I am not resisting," and "I have congestive heart failure," Ambler II can be heard saying in body camera footage of his arrest released Monday by the Austin Police Department, which is investigating the incident because Ambler died in Austin.

Austin TV station KVUE and the Austin American-Statesman first reported on the video after months of records requests.

Maritza and her husband, Javier, said they haven't seen that video, either -- they just recently learned it existed -- and they won't watch it.

"We went through this, this feeling a year ago, and we were sort of like, recovering," Javier Ambler said.

"Even though we knew that eventually the truth got to come out and, that way we can have some closure, but I understand it's (the video) horrific."

Javier's mother described her only son as a funny, loving, mama's boy.

Ashes in a locket

She has carried his ashes with her in a locket since the day he was cremated more than a year ago.

"As a mother, I wouldn't wish this on anyone," she said.

She still talks to him everyday, she said.

"Sometimes I feel a sensation and I know he is with me," Maritza Ambler said.

Both parents said they didn't get to see their son's body until the funeral; they were told it was because of the investigation.

Javier Ambler broke down while speaking about the son he described as a "gentle giant" and a "great father."

Ambler says his son was brought up as an army brat.

"He didn't know white from black or Latino from Filipino ... because in the DOD schools that we had, we had the privilege to educate him in, that didn't exist," the father said. "Everything was green, army green."

"We didn't even talk about this, you know, like what's going on right now (with the protests), because it wasn't necessary," he said.

But his mother said she thought the color of her son's skin played a role in his death.

"They just saw somebody with that skin color ... somebody that they are used to going against, and you know he was just a target," she said. "I do think it is part of the reason why they chased him."

A chase that ended in death

The chase began in the early morning of his death when Ambler II didn't dim his car's headlights as he drove past a deputy, according to a Williamson County sheriff's office incident report.

Ambler II kept driving for 22 minutes after the deputy tried to pull him over, authorities said. The chase ended when his Honda Pilot crashed with a grove of trees, according to the death report.

Ambler got out of his car with his hands raised, but resisted attempts to handcuff him and refused to follow commands, a Williamson County Sheriff's Office report says. At least one deputy used a Taser on him, the report says.

About two minutes after the video first records Ambler saying he has heart failure -- and nearly 90 seconds after he's first heard saying he can't breathe -- deputies appear to have handcuffed him.

But less than 30 seconds after he's handcuffed, officers appear to realize Ambler is unresponsive. An officer is heard saying so in a radio request for emergency medical services.

After officers check for a pulse and find none, Ambler's handcuffs are removed, and officers can be heard administering CPR until medical units arrive.

Death report: Cause of death was homicide

Their son would have had difficulty physically obeying the arresting officers' orders, including putting his hands behind his back to be handcuffed, because of his obesity, his parents said.

She knows not all officers are bad, Maritza Ambler said, but she would like these officers to go to jail, "because they took a life." As far as she knows, her son was defenseless, she said.

"For too long," she said, some officers have "been hurting people, killing people, and just getting away with it," she said.

The cause of Ambler's death was congestive heart failure and hypertensive cardiovascular disease associated with morbid obesity, "in combination with forcible restraint," according to the custodial death report from the office of Texas Attorney General Ken Paxton.

The manner of death was homicide, the custodial death report stated.

"There was no consideration, they meant to take his life that morning," Javier Ambler said. "I would like for them to go to jail for whatever time the DA, or the jury, or the judge say they must do, because not until they go to jail and they feel like what jail feel(s), will this thing stop."