Parents pull kids from school because of a list 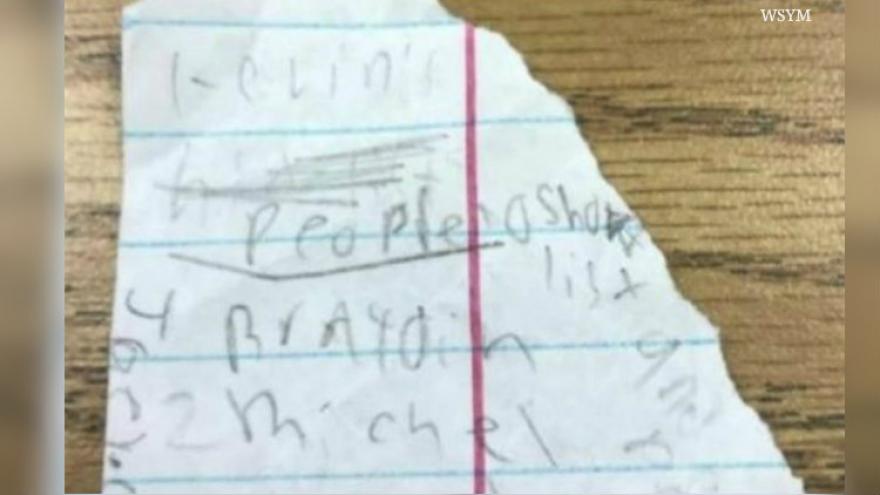 LANSING, Mich. (WSYM) -- Some parents in Leslie think it says "shoot" and they're livid that the school district isn't doing more about it. Parents of the six kids on the list are pulling them out for the last week of school. The superintendent told FOX 47 News he can't do anything until he knows for sure who wrote it and exactly what they wrote.

"It was heartbreaking, seeing my child on a piece of paper that says he was going to get shot," said Michael Loveless.

"It's a very terrible feeling to have your kids name written on a piece of paper that somebody wants to shoot him," said Shauna Howe.

Shauna Howe says her son has no clue what the note was about, she had him read it out loud to her, so she could explain what was going on.

"He just instantly looked at me and you could see that he was heartbroken, he was scared, he was frightened, and he doesn't want to go to school he is afraid to go back," said Howe.

Leslie Superintendent Jeff Manthei tells me he's taking this seriously. He doesn't know if the paper says "shoot" or "short". He's working with police to get to the bottom of it.

"We believe that school safety, student safety is most important because if they don't feel safe they can't learn, so that is in the utmost priority of ours is school safety," said Jeff Manthei.

We interviewed Michael Loveless last month when his son was bullied for the color of his skin. Now that he's on this list Loveless says it might be time for him to go somewhere else.

"He told us that he is sick of being bullied to the point where we are now considering switching his school district," said Loveless.

Leslie police department is investigating. They say the first step is figuring out who wrote the list and then they'll go from there.

Leslie's Superintendent says he will be putting together a community forum, before the next school year to deal with the effects of recent bullying, as well as this controversy.