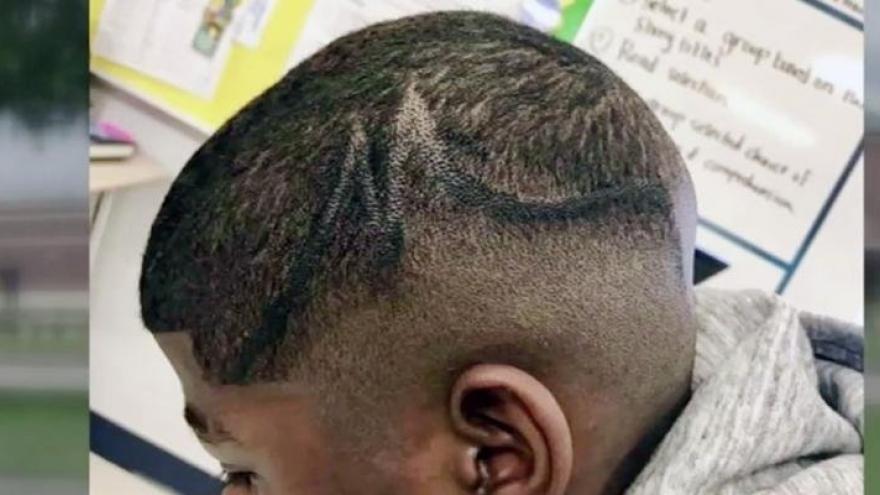 (CNN) -- The parents of a middle school student are suing a Houston-area school district and school officials in federal court for allegedly coloring in his hair design earlier this year with a black permanent marker.

According to the lawsuit filed Sunday, officials at the Berry Miller Junior High in Pearland, Texas, claimed the design in the then-seventh grader's haircut violated the Pearland Independent School District's dress code policy.

The suit alleges, "They laughed as they took many minutes to color 13-year-old J.T's scalp which took many days of scrubbing to come off."

The lawsuit says Juelz Trice got a fade haircut April 16 and the next day when he was in the cafeteria for breakfast he was told by an assistant principal to go to the office.

The civil rights lawsuit names the then-assistant principal Tony Barcelona (since promoted to principal), discipline clerk Helen Day and teacher Jeanette Peterson as defendants as well as the school district.

CNN has reached out to the individuals named in the lawsuit and has not immediately heard back.

The boy, who is African-American, allegedly was given two options by the two administrators.

The black Sharpie made the design line in Juelz's hair more prominent, the complaint says.

Attorney says school district has done nothing but change policy

Randall Kallinen, attorney for the student's parents Dante Trice and Angela Washington, said Tuesday that the school never tried to notify the family before coloring their son's scalp.

The discipline clerk should have known better how children should be disciplined, he said.

The attorney says other than changing the dress code, the school district has done nothing to attempt to rectify the situation.

• Must be clean, neat and well groomed

• Distracting colors are not allowed.

• Mustaches, beards, or goatees are not allowed.

• Sideburns must be kept neatly trimmed and must not extend beyond ear level.

• Head coverings such as hats, caps, bandanas, or hair rollers are not allowed. (An exception will be made for religious headwear)

District says it has not seen lawsuit

Pearland ISD said it has not received formal notification of a lawsuit.

"Upon receipt, it will be reviewed by our legal counsel," Tanya Dawson, a lawyer for the school district, said in a statement.

The lawsuit, filed in the Southern District of Texas, asks for compensatory and punitive damages and for the court to order that school district employees receive racial sensitivity training about certain haircuts.

Juelz began eighth grade at the school last week. Kallinen said he is dismayed Barcelona, Day and Peterson are still at the school.