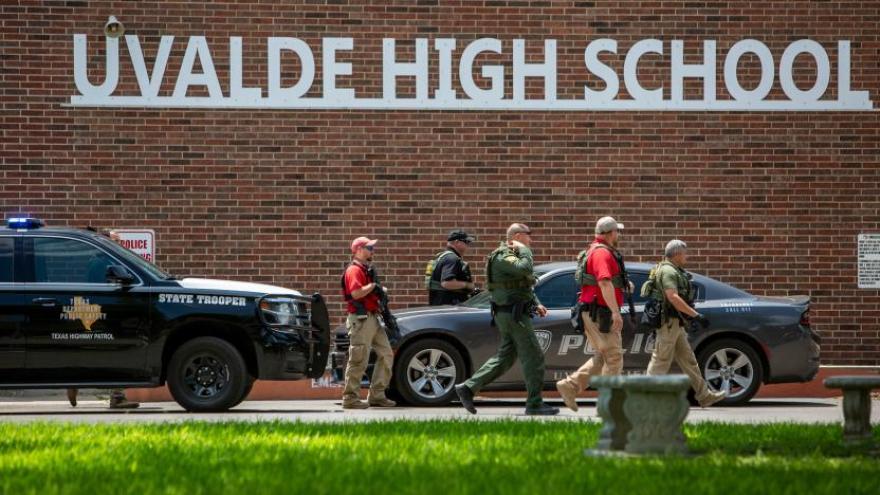 Parents waited late into the night for children to be identified after a gunman killed 19 students and 2 adults at a Texas elementary school.

The violent act shook a nation still reeling from a mass shooting just 10 days ago. The siege in Uvalde, Texas, ended when law enforcement killed the 18-year-old gunman, officials said, and parents waited late into Tuesday night at a civic center to learn whether their children had survived, some having given DNA to help authorities identify victims, they told CNN.

Now, the city about 90 miles west of San Antonio and just east of the US-Mexican border finds itself on the long list of American communities devastated by mass shootings.

So far, two 10-year-olds and a fourth-grade teacher have been named publicly by relatives as among the dead. Authorities have identified all the victims, whose remains have been removed from the murder scene, and notified their families, Texas Department of Public Safety Lt. Chris Olivarez said, telling CNN all those killed and hurt were in one classroom. Area hospitals treated at least 20 injured, they said Tuesday evening.

Tuesday's massacre is the second-deadliest school shooting since 2012, when 26 children and adults were killed at Sandy Hook Elementary School. It is at least the 30th shooting at a K-12 school in 2022, according to a CNN tally.

The gunman in Uvalde is believed to have shot his grandmother -- who was hospitalized in critical condition Tuesday evening -- before driving to Robb Elementary to carry out to attack, per DPS.

Soon after, police got a 911 call about a vehicle that had crashed near the school and someone armed with a rifle heading inside, Olivarez told CNN in an interview Wednesday morning. The man was wearing a "tactical vest carrier with no ballistic panels," Olivarez said.

Police responded and engaged the shooter before he got into the building, Olivarez said. Officers met the gunman's fire, he said; two were shot and expected to live.

The shooter then got into the building, where he barricaded himself inside a classroom and opened fire on the children and two teachers, Olivarez said, calling the act "complete evil."

With the shooter barricaded inside, officers were at a disadvantage, Olivarez said.

"There was not sufficient manpower at that time, and their primary focus was to preserve any further loss of life," he told CNN. "They started breaking windows around the school and trying to rescue, evacuate children and teachers while that was going on."

A specialized tactical team arrived, forced its way into the classroom and shot the gunman dead, Olivarez said. One officer on the team was shot and injured and expected to survive.

President Joe Biden in a national address Tuesday night recalled the Sandy Hook shooting, which happened when he was vice president.

"I had hoped when I became President I would not have to do this again," he said. "How many scores of little children who witnessed what happened -- see their friends die as if they're in a battlefield, for God's sake. They'll live with it the rest of their lives."

• Shooter acted alone: The gunman, identified by officials as 18-year-old Salvador Ramos from Uvalde, did not have any assistance, said Pete Arredondo, chief of police for the Uvalde Consolidated Independent School District.

• 'The school year's done,' superintendent says: The Uvalde school district canceled the rest of its school year, which was set to end Thursday, said its superintendent, Hal Harrell. Grief counseling and support for students will be available at the civic center starting at 10 a.m. Wednesday, the district said.

• Reaction pours in from around the world: Pope Francis shared his condolences with the victims' families and called for stronger gun control, saying "such tragedies can never happen again." Ukrainian President Volodymyr Zelensky, whose country is at war, said via video conference: "This is terrible to have victims of shooters in peaceful time." Leaders of France, Germany and Spain also expressed condolences.

As the last day of school was drawing near, Robb Elementary students were celebrating with special themed dress days, including Tuesday's theme of "Footloose and Fancy." Students were encouraged to come dressed in nice outfits and show off their fun footwear, according to a post on the school's Facebook page.

But by Tuesday afternoon, shaken students were being bused to the civic center-turned-reunification site. As the evening stretched on, some parents began to learn their young children had not survived.

"We see people coming out just terrorized. They're crying one by one. They're being told that their child has passed on," state Sen. Roland Gutierrez told CNN Tuesday night from the site.

As news of the shooting broke in Uvalde, Robb Elementary parents were told students were being taken to the SSGT Willie de Leon Civic Center, according to a post on the school district's Facebook page. The civic center quickly became the epicenter for families looking for their children, and scenes of devastation began to play out as victims were identified.

Parents were asked for DNA swabs to confirm their relationships to their children and instructed to wait an hour for an answer, at least four families told CNN.

A father, who had just learned his child was dead, fought tears as several of his cousins embraced him. A few yards away, a grandmother who had just driven from San Antonio said she would not stop praying for her 10-year-old granddaughter as they waited for the DNA results.

Inside, city workers handed out pizza, snacks and water to families. Some parents waited in silence, while others sobbed quietly as a group of children sat on the floor playing with teddy bears. A group of local pastors and chaplains arrived and offered their support to the families.

By Tuesday night, some families had still not been reunited with their children and had no news, said Gutierrez, who represents Uvalde.

"We have people that still have not had their children identified," he told CNN Tuesday night. "Right now, they're still doing a DNA match."

In his address, Biden evoked his own experience as a parent who has lost children, saying there are now "parents who will never see their child again, never have them jump in bed and cuddle with them, parents who will never be the same. To lose a child is like having a piece of your soul ripped away."

Robb Elementary includes second through fourth grades and had 535 students in the 2020-21 school year, state data shows. About 90% of students are Hispanic, and about 81% are economically disadvantaged, according to the data. Uvalde County had a population of about 25,000 in the 2020 census.

Hours after the shooting, people in the neighborhood surrounding the school sat with their families outside their homes, some gathering with neighbors seeking to understand what occurred just blocks away.

Adela Martinez and her husband Paul Martinez, a former city council member, could sense the grief and sadness spreading through their town, they said.

"We are like a big family here. You can expect something like this (shooting) in big cities like New York but in Uvalde? If this happened here, now I believe it can happen anywhere," Adela Martinez said.

Two of the children killed have been identified publicly by their parents.

Ten-year-old Xavier Lopez's mother confirmed her son was killed and recalled her fourth grader's unforgettable smile. Xavier was days away from finishing elementary school, his mother told the Washington Post, and he "couldn't wait" to attend middle school.

Martinez had been at the school earlier Tuesday to cheer on Xavier during the honor roll ceremony, at which he got a certificate. She took a picture of her boy and told him she was proud of him and loved him, she said. Then, she hugged her "mama's boy" goodbye.

Elsewhere in the hours after the shooting, Angel Garza pleaded on Facebook for help finding his daughter, 10-year-old Amerie Jo Garza.

He followed up early Wednesday morning: "She's been found. My little love is now flying high with the angels above."

"Please don't take a second for granted," Garza wrote. "Hug your family. Tell them you love them."

Mireles had been an educator for 17 years and in her off time enjoyed running, hiking, biking and spending time with her family, according to her profile on the Uvalde Consolidated Independent School District website.

What we know about the shooter

The shooter had one rifle when he entered the school, along with the tactical vest carrier, Olivarez said Wednesday.

"Typically those type of carriers are used by tactical teams, SWAT teams, where they can place magazines, extra ammunition inside those carriers and be able to move in a tactical formation," he said.

Just three days before Tuesday's massacre, a photo of two AR-15-style rifles appeared on an Instagram account tied to the 18-year-old shooter, who was a student at Uvalde High School.

Ramos had stopped attending school regularly, one of his former classmates told CNN. "He barely came to school," said the friend, who did not wish to be identified. Ramos had recently sent him a picture of an AR-15, a backpack with rounds of ammunition and several gun magazines, the friend added.

"I was like, 'Bro, why do you have this?' and he was like, 'Don't worry about it,'" the friend said. "He proceeded to text me, 'I look very different now. You wouldn't recognize me.'"

Ramos "kept to himself mostly," said Mendes, an evening manager. He "didn't really socialize with the other employees. ... He just worked, got paid, and came in to get his check."

The victims' loved ones and community members grieving the loss of 21 Uvalde residents join a growing number of Americans whose lives have been ravaged by mass shootings -- and school shootings in particular. It's a "club that no one wants to be a part of," said Erica Lafferty, whose mother, Dawn Lafferty Hochsprung, was killed in the Sandy Hook shooting.

So far, there have been more mass shootings than days in 2022 -- including the racist attack at a Buffalo, New York, grocery store a little over a week ago that left 10 dead. At least 213 mass shootings had been recorded this year as of Tuesday, the 144th day of the year, according to the Gun Violence Archive. CNN and the archive define a mass shooting as one which four or more people were injured or killed, not including the shooter.

Parents of children who died in the Sandy Hook Elementary and Parkland, Florida, school shootings expressed support for the Uvalde community and aired frustrations about the shared language of loss that gun violence has created for so many families.

Fred Guttenberg's daughter Jaime was one of 17 people killed in the 2018 shooting at Marjorie Stoneman Douglas High School in Parkland.

Nicole Hockley, whose son Dylan was killed at Sandy Hook, cofounded the Sandy Hook Promise Foundation, a nonprofit that works to prevent gun violence. Working on the nonprofit gave her a purpose after Dylan's death, she said, and she encouraged parents to know joy is still possible after their loss.

"It's possible, but it sure as heck isn't easy. I have a surviving son who I love with my whole life. He brings me joy," she said.

For Uvalde, there is now "an army of survivors" to support them, Guttenberg said, sharing as advice for those now in mourning the words of his rabbi at his daughter's funeral: "We don't move on, we move forward."