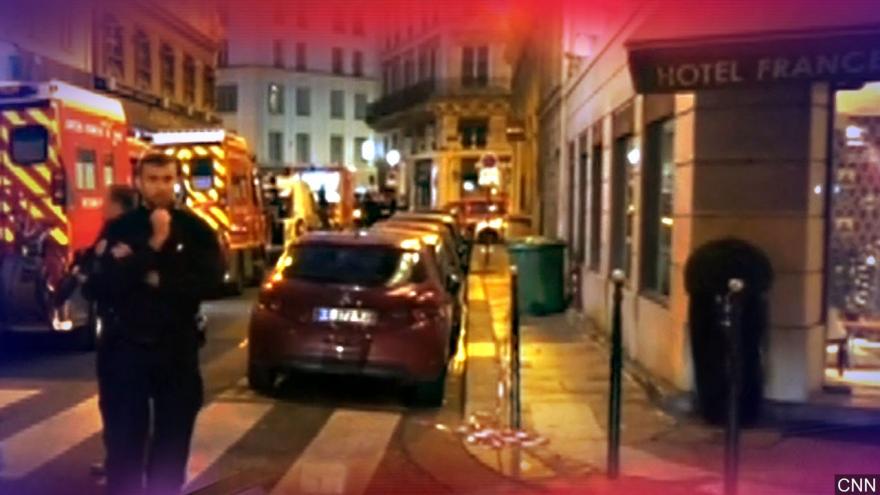 (CNN) -- The knife-wielding attacker who went on a stabbing rampage in Paris, killing one person and wounding four more, was born in Russia's Chechnya region, a judicial source said.

The attacker was shot dead by police after stabbing five people in a popular tourist district near the Paris opera house Saturday night, when sidewalks and restaurants were filled with people.

During the attack, he yelled the Arabic phrase "Allahu Akbar," meaning "God is great," city prosecutor François Molins told reporters at the scene.

He was on a police anti-terror watch list of people suspected of having radicalized views and posing a potential security risk, though had no criminal record, the judicial source said.

In a statement published online, ISIS claimed responsibility for the attack, calling the assailant a "soldier of the Islamic State."

The attacker was born in Chechnya, a republic in southwest Russia, in 1997, a judicial source in Paris told CNN on Sunday.

ISIS has long recruited radicals from the North Caucasus, a semiautonomous region of Russia that has been in conflict with Moscow since declaring independence in 1991.

Horror on the streets of Paris

The attack happened about a 10-minute walk from the Paris opera house, known as Palais Garnier. British restaurateur Oliver Woodhead described to CNN the terrifying moment the attacker confronted police and was shot dead.

"We (my barman and I) both came out and it was at this moment that the attacker came round the corner, with his hands up, covered in blood, holding a box knife," said Woodhead, visibly shaken.

"Three police got out of the police car and had him encircled and tasered him several times to no effect. And then he (the attacker) managed to isolate one of the policeman, get him further down the street, and then the policeman fired twice and the attacker fell."

Paris Mayor Anne Hidalgo told reporters gathered at the site of the attack Sunday that, "I am with the victim and with the young man, young French and Parisian man, who died yesterday. But we are here and this city is still alive"

French President Emmanuel Macron also paid tribute to the courage of the police who "neutralized the terrorist" during the attack, in a tweet Saturday. The President added that his thoughts were with the victims.

Militants from the former Soviet Union have proved to be fertile recruiting ground for jihadists in recent years, with analysts estimating thousands have gone to fight for terror cells in Syria.

As Michael Weiss, a national security analyst for CNN and author of "ISIS: Inside the Army of Terror" explains, many of these radicals are already battle-hardened from decades of conflict with Russia.

"In 2015, weeks before the grisly Paris attacks, I interviewed a former ISIS operative who had defected from the terror organization and wound up temporarily in Istanbul," recounted Weiss.

"He said the most admired -- and feared -- contingent of ISIS recruits were the "Chechens" -- in this case a reference not just to citizens of the semiautonomous region of the Russian Federation, but to those who had grown up in the greater Caucasus or various Central Asian republics that attained their independence upon the collapse of the USSR.

"Many were in fact Chechens or Dagestanis, battle-hardened from decades of civil war and insurgency back home."

The stabbing is the latest in a series of Islamist-inspired terror attacks in France in recent years.

It comes less than two months after a hero police officer was killed after swapping places with a female hostage during an attack by an ISIS supporter on a supermarket in Trebes, southern France.

In January 2015, a total of 17 people were killed in attacks on the satirical magazine Charlie Hebdo, a kosher grocery store and the Paris suburb of Montrouge. In November that year, at least 130 were also killed in attacks at several locations across the French capital, including the Bataclan concert hall and Stade de France.

And in 2016, 86 people died in Nice when a truck rammed into crowds during Bastille Day celebrations.