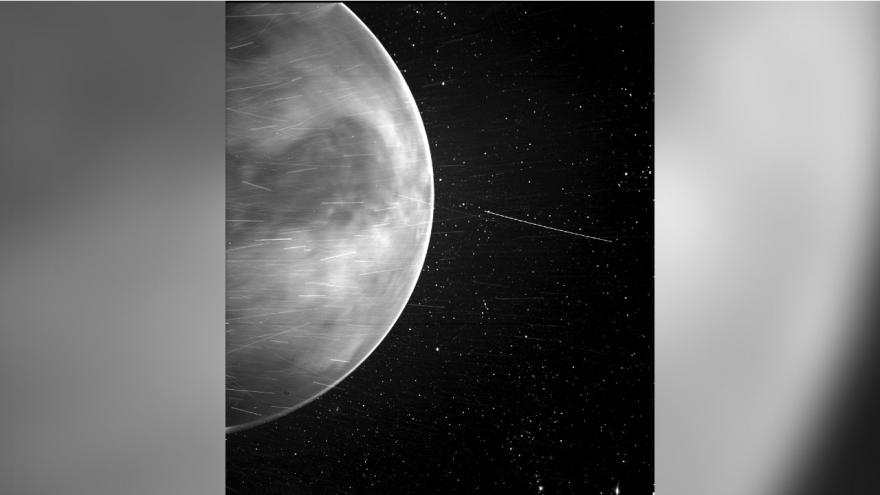 When flying past Venus in July 2020, Parker Solar Probe\'s WISPR instrument detected a bright rim around the edge of the planet that may be nightglow. Photo courtesy: NASA/Johns Hopkins APL/Naval Research Laboratory/Guillermo Stenborg and Brendan Gallagher

(CNN) -- The Parker Solar Probe is on a mission to study the sun, but it keeps discovering new, intriguing things about our mysterious planetary neighbor Venus.

The NASA spacecraft flew by Venus last summer and detected a natural radio signal from Earth's twin. This signal revealed that the probe actually passed through the upper atmosphere of Venus, collecting the first direct measurement of it in almost 30 years.

Scientists were surprised to discover that the Venusian atmosphere looks very different now, and they published their findings Monday in the journal Geophysical Research Letters.

The solar mission, which launched in 2018, is intended to study the sun and unravel some of its mysteries. The probe will travel through the sun's atmosphere over the course of seven years and come closer to the surface of our star than any spacecraft before it.

Venus is instrumental to the probe's success. The spacecraft uses the gravity of Venus as it swings around the planet, called a gravity assist, to help bend the probe's orbit and bring it closer and closer to the sun.

During one of these Venusian flybys on July 11, 2020, the probe collected evidence that Venus' upper atmosphere goes through some unusual changes that are influenced by the solar cycle, or our sun's 11-year activity cycle.

The spacecraft also snapped an amazing image that shows an unexpected side of our planetary neighbor. This was the third Venus gravity assist for the Parker Solar Probe. During the flyby, the probe came within 517 miles (833 kilometers) of the planet's surface.

The information gathered by Parker so far about Venus is helping scientists to understand why it's so different from Earth, even though the planets are often referred to as twins.

Both planets are rocky and similar in size, but something happened to cause Earth and Venus to develop differently. Unlike Earth, Venus doesn't have a magnetic field. Its inhospitable surface has blazing temperatures that can melt lead.

Attempts to study Venus using spacecraft are tricky, because they can only survive for a couple of hours at most if they try to descend to the surface. Previous missions to explore Venus include NASA's Pioneer Venus Orbiter from 1978 to 1992 and the European Space Agency's Venus Express from 2005 to 2014, both of which orbited the planet.

But understanding why Venus became this way can help scientists determine why some Earth-like planets appear habitable while others don't.

During the third Venus flyby, Parker Solar Probe's FIELDS instrument, which measures electric and magnetic fields in the sun's atmosphere, detected a natural radio signal at a low frequency. This appeared as a "frown" in the data from FIELDS.

"I was just so excited to have new data from Venus," said Glyn Collinson, lead study author and research associate at NASA's Goddard Space Flight Center in Greenbelt, Maryland, in a statement. "To see Venus now, it's all about these little glimpses."

Collinson, a Venusian expert who has studied data from previous missions to the planet, thought the signal seemed familiar. He previously worked on the Galileo orbiter, which studied Jupiter and its moons from 1995 to 2003.

This same sort of frown would appear in Galileo data when the spacecraft passed through the ionospheres of Jupiter's moons, Collinson noted.

Earth and Venus both have an ionosphere, or an electrically charged layer of gas at the upper edge of the atmosphere. This plasma emits natural radio waves that can be picked up by instruments like Parker's FIELDS.

Collinson and his colleagues realized the probe had brushed the upper atmosphere of Venus during the July 2020 flyby. The radio signal picked up by FIELDS helped the researchers calculate the density of the Venusian ionosphere. The last time the research team had access to that kind of data, it was collected by the Pioneer Venus Orbiter in 1992.

At that time, the sun was nearing solar maximum, or the peak of activity during a solar cycle.

During the July flyby nearly 30 years later, data on the ionosphere was gathered six months after the sun's solar minimum.

Comparing the data revealed something scientists have suspected for a long time: Venus' ionosphere changes in response to the sun's activity across its solar cycle.

"When multiple missions are confirming the same result, one after the other, that gives you a lot of confidence that the thinning is real," said study coauthor Robin Ramstad, postdoctoral researcher at the Laboratory of Atmospheric and Space Physics at the University of Colorado, Boulder, in a statement.

Understanding the ways Venus responds to changes experienced by the sun could help scientists unlock how the planet evolved. The Venusian ionosphere leaks energized gas into space, which suggests its atmosphere has changed over time.

"The goal of flying by Venus is to slow down the spacecraft so that Parker Solar Probe can dive closer to the Sun," said Nour E. Raouafi, Parker Solar Probe project scientist at The Johns Hopkins Applied Physics Laboratory, in a statement. "But we would not miss the opportunity to gather science data and provide unique insights into a mysterious planet such as Venus."