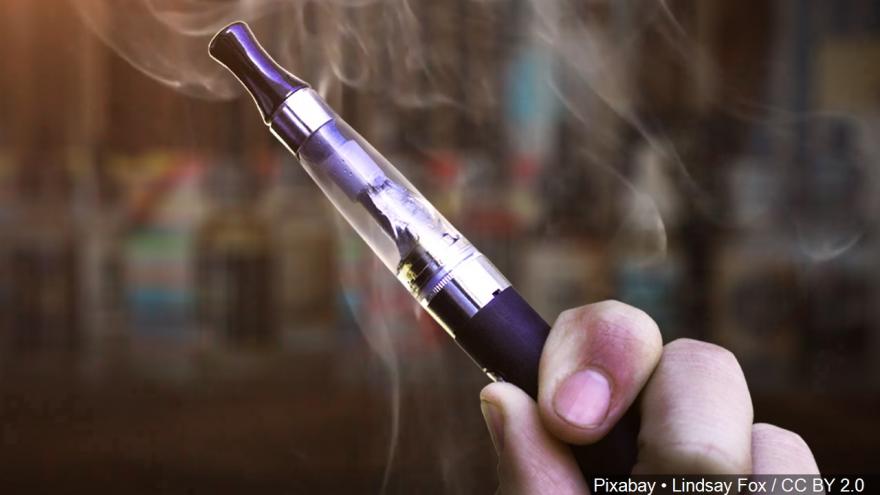 (CNN) -- Today's the day: An e-cigarette policy that goes into effect will result in a number of flavored vaping products being taken off the US market.

Trump administration officials announced in September that they were concocting such a policy -- which came to be known as a "flavor ban." This is partly because the policy, as it was originally announced, would ostensibly strip all flavors except tobacco from the US market. At the time, officials said the policy would be finalized in several weeks.

Over the months that followed, many lawmakers and health groups criticized the administration for not finalizing the policy, while reports emerged that it was backing down from its original promise.

The final policy, announced January 2, now includes a number of exceptions that the US Food and Drug Administration says are the result of new data about which products are commonly used among children. However, critics have called it a "hollowed-out" policy that ended up "watering down the flavor ban."

"The final policy is riddled with loopholes that allow thousands of flavored e-cigarette products to remain available," Matthew L. Myers, president of the Campaign for Tobacco-Free Kids, said in a statement Wednesday.

The policy, he added, "will not stop the youth e-cigarette epidemic that is addicting a generation of our kids."

It's not a law, nor is it binding. And it doesn't change the fact that e-cigarettes are on the market illegally -- none have received "premarket authorization" from the FDA.

And it's not actually a ban, according to Bonnie Halpern-Felsher, founder and executive director of the Stanford Tobacco Prevention Toolkit.

"It's an enforcement of what they already had on the books," she said.

According to the FDA, the new policy "represents the current thinking of the Food and Drug Administration" and "describes how we intend to prioritize our enforcement resources."

The agency can, and has, gone after manufacturers and retailers of e-cigarettes for a number of reasons, including advertising and selling to minors. These actions have included warning letters, fines, seizures and injunctions.

But the FDA doesn't have unlimited resources to go after companies that break the law.

"FDA will make enforcement decisions on a case-by-case basis," the policy says, "recognizing that it is unable, as a practical matter, to take enforcement action against every illegally marketed tobacco product, and that it needs to make the best use of Agency resources."

According to the policy, the FDA intends to prioritize going after cartridge-based vaping products in flavors other than tobacco and menthol.

A cartridge, or pod, is described as "any small, enclosed unit (sealed or unsealed) designed to fit within or operate as part of" a vape.

Not included in the policy are disposable vapes, those with an open-tank system, and their respective e-liquids, which come in a variety of flavors.

The FDA says it's a way to go after products that are commonly used among children, while still leaving a door open for adult smokers who might vape instead.

The agency notes that many cartridge-based vapes "are easy to conceal, can be used discreetly, may have a high nicotine content, and are manufactured on a large scale." Their immediate usability, the FDA adds, may "lower barriers to initiation" among youth.

Mitch Zeller, director of the FDA's Center for Tobacco Products, said in an e-mailed statement that the policy also focuses enforcement on any vaping products with marketing targeted to minors, or whose manufacturers have failed to take "adequate measures" to prevent minors from getting ahold of their products.

"Let us be clear," Zeller said, "under this policy, If we see a product that is targeted to kids, we will take action."

If all goes according to plan, flavored cartridges should no longer be available on shelves or online in the US, with the exception of tobacco and menthol.

Realistically, however, this will require awareness and cooperation among retailers about the policy taking effect and what products are impacted.

"While we expect that responsible members of industry will cease the manufacture, distribution and sale of unauthorized e-cigarette products, the public may continue to see some of the types of products outlined in the [FDA's] priorities on the market as the agency works to hold manufacturers and retailers -- both in brick-and-mortar stores and online -- accountable," according to an email from an FDA spokesperson.

The email added that the agency will be starting "inspections and surveillance of manufacturers and retailers" to make sure companies are following suit.

A number of leading e-cigarette companies previously indicated they will cooperate, and in some cases have already removed certain flavors from the market. Juul, for example, had previously stopped selling mint, mango, creme and cucumber flavors -- leaving only tobacco and menthol.

The only way these flavored products would be allowed back on the market is if they receive premarket authorization by the FDA after evaluating their impact on public health.

Eventually, all vaping products will need to undergo the same premarket review. That deadline is currently set for May. Products not included in the FDA's newly enacted policy may stay on shelves for up to a year while the agency considers their applications.

Some companies -- including Logic and Reynolds, the maker of Vuse products -- have already submitted applications, company executives said Wednesday at a hearing of the House Committee on Energy and Commerce. The FDA does not disclose the total number of applications received.

How will this change vaping habits?

How the new policy will affect vaping habits among adults and kids, however, is still uncertain. Stanford's Halpern-Felsher said there simply isn't enough data to know.

For example, will young people be more likely to use menthol cartridges? Or will they seek flavors among tank vapes or disposables? Halpern-Felsher believes it's far less likely that kids will stop vaping altogether.

Moreover, kids are already using these products, she added.

"Youth have been using open systems and disposables before the FDA said that they're going to regulate [them]," she said. "I've been seeing Puff Bars being used for months now."

Puff Bars are disposable vapes that come in flavors such as "Pink Lemonade," "Blue Razz," and "O.M.G (Orange, Mango, Guava)." Halpern-Felsher shared a photo with CNN showing a collection of vaping products confiscated at one Northern California school before the FDA's announcement, including a number of Puff Bars -- which contain more e-liquid than a Juul pod, she added.

CNN reached out to the maker of Puff Bars for comment but did not receive a response. On its website, the company says it opposes its products being sold to minors and urges retailers to follow regulations, including checking IDs and not giving away free samples.

Beyond the youth issue, the FDA says it's keeping an eye out for any increase in black-market products after others come off shelves. The agency also affirms its policy "should have minimal impact on small manufacturers" -- part of a larger concern President Trump repeated last year.

Experts are also keeping their eye on adults who use tobacco products: Will they remain satisfied with their choices? Will some return to cigarettes or become dual users as a result?

For its part, the FDA says it can always course-correct -- especially if it sees a new trend among youth.

The agency will "continue to closely monitor data regarding youth usage of all e-cigarette products and adjust our enforcement priorities to address youth use as necessary," Zeller said.