Patagonia to sue Trump: 'The president stole your land' 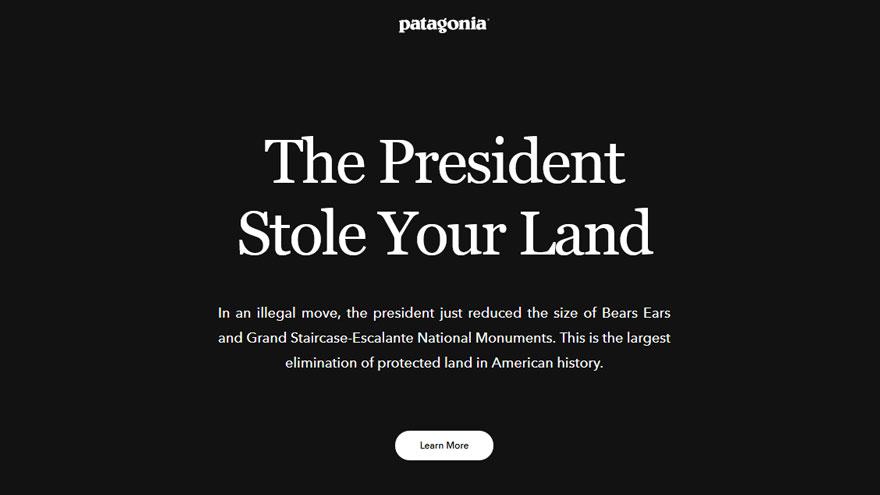 "We've fought to protect these places since we were founded and now we'll continue that fight in the courts," CEO Rose Marcario said in a statement Monday, calling Trump's actions "unlawful."

The California-based company, which is known for its activism, joins a growing number of organizations questioning the Trump administration's authority to slash the areas covered by Utah's Grand Staircase-Escalante National Monument and Bears Ears National Monument.

Trump announced Monday that he would follow Interior Secretary Ryan Zinke's recommendations to reduce Bears Ears National Monument by over 80% to 228,337 acres and Grand Staircase-Escalante National Monument by roughly 45% to about one million acres. The plans would break Bears Ears into two national monuments and Grand Staircase-Escalante into three separate monuments.

In response, Patagonia changed its homepage to an all black background with the message "The President Stole Your Land" written in white in the center.

"This is the largest elimination of protected land in American history," it said, directing visitors to support groups fighting to preserve public lands.

Other outdoor retailers are also publicly speaking out over Trump's actions.

REI changed its homepage to feature a large photo of Bears Ears National Monument with the words "We ❤ Our Public Lands" written across it. The company said Trump's decision "undermines the integrity" of the Antiquities Act, which is used to designate and protect national monuments.

North Face announced it would donate $100,000 to an education center for Bears Ears.

Trump said his decision was made to "reverse federal overreach and restore the rights of this land to your citizens."

Heather Swift, a spokeswoman for the Interior Department, said the actions are "well within our authority." The White House didn't respond Monday to a CNN request for comment about legal action against Trump's decision.

The Outdoor Industry Association said the move would hurt the economy and jobs, two of Trump's declared priorities.

The president's announcement is "detrimental to the $887 billion outdoor recreation economy and the 7.6 million American jobs it supports," the association said in a statement Monday.

"This decision [...] will harm hundreds of local Utah communities and businesses, will stifle millions of dollars in annual economic activity and threatens thousands of jobs in the region," it added.