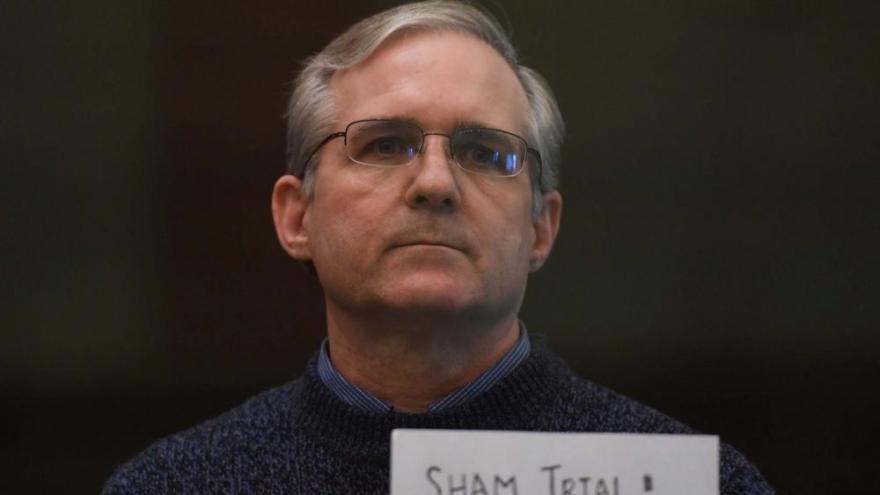 Paul Whelan stands inside a defendants' cage as he waits to hear his verdict in Moscow on June 15, 2020. Whelan returned to his labor camp after spending nearly three weeks in a medical facility at a different camp, his brother said on July 5.

(CNN) -- Paul Whelan, an American detained in Russia, returned to his labor camp last Wednesday after spending nearly three weeks in a medical facility at a different camp, his brother said Monday.

During his time at the facility, Paul Whelan was not able to contact his family, David Whelan said in an email to reporters.

According to David, Paul Whelan was not given medical attention until two weeks into his stay there, and after a chest and elbow x-ray, "he was given no additional medical treatment."

"Paul has returned to his labor camp in much the same condition he left it," David said.

Paul Whelan told CNN in a phone call in early June that he had a lingering cough and bursitis in his elbow from factory work in the camp, adding that "getting medical care here is very difficult."

Upon his return to labor camp IK-17 in Mordovia -- about eight hours drive from Moscow -- Paul Whelan was permitted to call his parents.

"Apparently, the warden at IK-17 cancelled Paul's phone account and so he was not able to call while he was away," David Whelan said, but noted that "one possible explanation is that Paul was moved from IK-17 and left out of communication for more than two weeks in order to keep him on ice."

"Not that he had planned any more audio statements, but this neatly kept Paul quiet during the meeting between President Biden and President Putin and afterwards," he said. "Otherwise, the lack of medical care and long stay don't make much sense on their own."

CNN has reached out to Russia's Federal Penitentiary Service for comment.

The former United States Marine was detained in Moscow in December 2018 and sentenced to 16 years in prison for an espionage charge he vehemently denies.

US President Joe Biden said he had discussed the cases of Paul Whelan and Trevor Reed -- another American detained in Russia -- during his meeting with Russian President Vladimir Putin in Geneva, pledging to "follow through" on that discussion.

"The families of the detained Americans came up and we discussed them. We're going to follow through with that discussion. I am not going to walk away on that," he added.

The families of both men expressed appreciation that Biden had spoken of them by name.

Following the summit, the US and Russia sent their ambassadors back to their respective posts after months of absence. US Ambassador to Russia John Sullivan returned to Moscow in late June -- a development welcomed by the Whelans.

"We were glad to see Ambassador Sullivan returned to Moscow and immediately engaged with representatives at the Ministry of Foreign Affairs," David Whelan said Monday. "These were the sorts of discussions and contacts we had hoped to see after the summit."

"Hopefully the next time Paul has to leave IK-17, it will be to return home," he said.