Peaceful protests and violent clashes erupted this weekend. Here's what happened in 6 cities 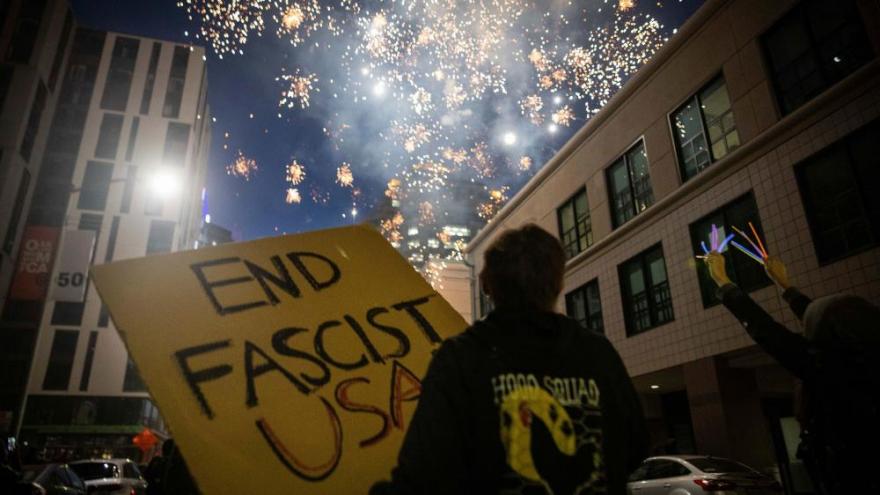 Protesters light fireworks in the middle of downtown Oakland during a protest on Saturday, July 25, 2020, in Oakland, California.

(CNN) -- Protests flared up across the country this weekend, two months after the police killing of George Floyd in Minneapolis catalyzed a nationwide reckoning over race and policing.

From Portland to Seattle to Louisville, Kentucky, protesters took to the streets, as the nation honored the life of civil rights hero John Lewis.

Some protests were largely peaceful. Others descended into clashes between law enforcement and demonstrators.

Here's a break down of the unrest.

Portland was already brimming with tension before the weekend.

Protests there took center stage this month after President Donald Trump sent federal agents to the city to protect federal property -- a move that angered local demonstrators, who view it as an occupation of their city.

Demonstrations Friday night began peacefully, according to the Portland Police Bureau, which said a crowd gathered outside the federal courthouse to listen to speakers.

Around 11 p.m., people began shaking a fence while others shot fireworks over it, police said. A large group of peaceful protesters appeared to approach the group rocking the fence and tried to de-escalate the tension, according to a CNN team on the scene.

Police "attempted to disperse the crowd using various munitions," the PPB said in a statement. According to police, members of the crowd had gas masks, shields, leaf blowers, power tools, fireworks and lasers.

Federal agents deployed tear gas and flash bangs from behind the fence, set up as a barricade between the protesters and the Multnomah County Justice Center, across the street from the federal courthouse, the CNN team reported. Right before agents released the gas, a crowd of peaceful protesters had been chanting "Black Lives Matter."

It's unclear if police or a federal agency released the gas. Chad Wolf, the acting secretary of Homeland Security, tweeted that six DHS officers were injured Friday night.

Protesters included the so-called "Wall of Moms" and a group of veterans who support Black Lives Matter.

One protester who only provided her first name, Victoria, told CNN she had joined the demonstrations because of her outrage over the death of George Floyd.

"That's not the America that I want to live in," she said. "I just can't sit at home (with) all that is going on, and I need to stand up and lend my voice to the important work that the Black community has been doing all along, and ignored by mainstream America and ignored by the institutions that be."

Protests continued Saturday night. In a series of tweets, police told protesters to disperse, citing "the violent conduct of people downtown" and warning that they would deploy tear gas.

Other incidents in the last week have only heightened tension in the city. Last weekend a 53-year-old Navy veteran told CNN he was beaten and pepper sprayed by law enforcement officers. And Wednesday, Portland Mayor Ted Wheeler was hit by tear gas after he had joined protesters outside the federal courthouse.

It's unclear which agency deployed the tear gas, but Portland police said they did not deploy CS gas, a commonly used type of tear gas.

Dozens of people were arrested in demonstrations this weekend in Seattle. This week, DHS officials told CNN that a response team from US Customs and Border Protection would be sent there to remain on standby to help protect federal facilities.

Forty-seven people were arrested on a variety of charges including failure to disperse and obstruction, according to a Seattle police news release Sunday.

According to that statement, 59 officers were injured. The injuries included abrasions, bruising, burns and a torn meniscus.

Protesters threw rocks, bottles, fireworks and others explosives at officers, according to police.

In recent weeks demonstrators in Louisville have been protesting the police shooting death of Breonna Taylor in March, further fueled by the Black Lives Matter movement following Floyd's death.

On Saturday, a Black group calling itself the Not F**king Around Coalition gathered in Louisville to call for justice in Taylor's case, according to CNN affiliate WAVE. The group coordinated the event with the Louisville Metro Police Department in order to maintain safety, the group's leader told WAVE.

"We're not here to cause chaos," said John Fitzgerald Johnson. "There have been rumors we're coming to hunt people down. Again, we are simply exercising our Constitutional rights to assemble and bear arms."

Saturday's demonstrations were largely peaceful, police said. However, three NFAC members suffered non-life threatening injuries after they were struck by gunfire after a firearm discharged, according to LMPD. There are no outstanding suspects, LMPD Chief Robert Schroeder said.

Eleven people were arrested Saturday, LMPD said. Protesters had gone to Lynn Stadium, police said, where some broke through a gate. Others used cars to block a bridge.

Protests in Oakland, California, started as a peaceful march to show solidarity with Portland protesters, according to CNN affiliate KGO.

But Saturday night police declared the protest an unlawful assembly and asked demonstrators to disperse after some protesters allegedly threw projectiles and pointed "illegal" lasers at officers, according to police.

Demonstrators knocked over barricades in front of police headquarters, the police said. Authorities shared images of a firecracker, blue paint splattered on the side of the building and a shattered glass door leading inside.

"We are using signs and giving vocal commands to the crowd if the assaults continue chemicals will be deployed," the Oakland Police Department said on Twitter.

Aurora has been convulsed by the death of a Black man, Elijah McClain, who died last August after a confrontation with Aurora police officers -- a case that gained renewed attention amid nationwide anger over Floyd's killing.

Protests over McClain's death took a violent turn Saturday when someone drove a vehicle through a crowd of demonstrators walking on a highway, police said in a tweet.

"We are in contact with that vehicle and are investigating," police said.

Police told CNN there were no reports that anyone was hurt by the vehicle.

"It's creating change," she said. "We're creating laws. We're bringing awareness, across the country and across the globe, to the issues of police brutality, so they're critical."

The majority of protesters were peaceful, but one group caused "major damage" to a courthouse, police said on Twitter, sharing pictures of smashed windows and broken fences.

The shooting death of one protester overshadowed demonstrations in Austin Saturday night.

An adult male, identified by police Sunday night as 28-year-old Garrett Foster, died after shots were fired at protesters, police spokeswoman Katrina Ratcliff said. A suspect is in custody and is cooperating with police.

Officers were monitoring protests on Congress Avenue when shots were fired shortly before 10 p.m. local time, Ratcliff said. Police found the victim, who had suffered a gunshot wound, and transported him to the hospital, where he was pronounced dead.

Initial reports suggest the victim might have been carrying a rifle and approached the suspect's vehicle, Ratcliff said, before the suspect allegedly shot the victim from inside the vehicle.