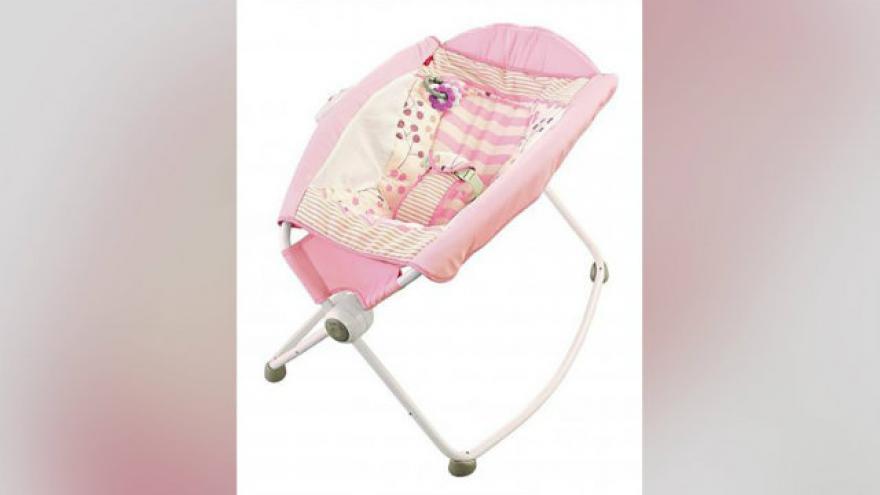 The American Academy of Pediatrics on called for the immediate recall of the Fisher-Price Rock \'n Play Sleeper, citing a Consumer Reports analysis linking the popular sleeper to 32 infant deaths. Photo courtesy CPSC

(CNN) -- Keenan and Evan Overton want to warn other parents about the Fisher-Price Rock 'n Play sleeper after their son died while sleeping in the product.

Three days before Christmas 2017, 5-month-old Ezra slept in the sleeper, while his father Keenan Overton was asleep on the couch next to him.

"I looked up and I found him in a standing position but faced down in the chair, his face was on the back of the seat and he was already passed away. I picked him up and his face was already blue and his nose was squished in," Keenan Overton told CNN.

Ezra wouldn't have been able to roll over yet, he told CNN.

According to Evan Overton, the infant's mother, they haven't filed suit but are negotiating with Fisher-Price.

"Fisher-Price and Mattel, their parent company, we are in negotiations to discuss kind of what we expect from talking about and speaking out on the dangers of this chair," Evan Overton said. "Our main thing is to inform other people so, that it won't happen to somebody else."

Evan Overton says she hopes the chair is recalled.

On Tuesday, the American Academy of Pediatrics called for the immediate recall of the Fisher-Price Rock 'n Play Sleeper, citing a Consumer Reports analysis linking the popular sleeper to 32 infant deaths.

According to Consumer Reports, Fisher-Price said the company does not believe that these deaths have been caused by the product, as some of the children either had a previous medical condition or the product was not used properly.

The call by the pediatricians' group comes less than a week after the Consumer Product Safety Commission (CPSC) asked customers to stop using the popular baby sleeper if their children are able to roll over because several infants have died.

A warning issued Friday by the commission and Fisher-Price cited reports of 10 infant deaths since 2015.

But the AAP said the warning did not go far enough to protect infants. It called for stores to remove the sleeper from its shelves.

"This product is deadly and should be recalled immediately," said Dr. Kyle Yasuda, AAP president. "When parents purchase a product for their baby or child, many assume that if it's being sold in a store, it must be safe to use. Tragically, that is not the case. There is convincing evidence that the Rock 'n Play inclined sleeper puts infants' lives at risk, and CPSC must step up and take immediate action to remove it from stores and prevent further tragedies."

Chuck Scothon, general manager at Fisher-Price, said in a statement that the sleeper meets all "applicable safety standards" and that the "safety of children is our highest priority. The loss of a child is tragic and heart-breaking."

Scothon said the company stands by the safety of the sleeper and continued to work with the commission on the safe use of its products.

"It is essential that the product warnings and instructions are always followed," the statement said. "We will continue to do all we can to ensure that parents and caregivers have the information necessary to create a safe sleep environment for infants."

The AAP noted that Consumer Reports concluded that 32 deaths, between 2011 and 2018, included babies even younger than the 3-month threshold in the initial warning. The cause of death for some babies was asphyxia, or the inability to breathe caused by the babies' position.

"We cannot put any more children's lives at risk by keeping these dangerous products on the shelves," said Dr. Rachel Moon, chair of the AAP Task Force on sudden infant death syndrome (SIDS).

The AAP does not recommend inclined sleep products such as Rock 'n Play, or any other products that require restraining a baby. It also advises against using car seats, strollers or other devices for sleep. The group said babies could roll or turn into an unsafe position and suffer suffocation or strangulation when unable to move.

The CPSC said last week that the 10 fatalities -- of babies 3 months or older -- involved infants who rolled from their back to their stomach or side while unrestrained. The warning did not say what caused the infants' death.

The latest death was reported last month, said Patty Davis, a spokeswoman with CPSC. It's unclear when the other deaths took place.

The CPSC recommended the public stop using the sleeper if their children are 3 months old or "as soon as an infant exhibits rollover capabilities."

Davis said the commission was aware of the report of additional fatalities.

"We are investigating other deaths that have occurred in the Rock 'n Play," she said in a statement. "CPSC has requirements it must follow for any decisions concerning recalls. If the evidence shows the need for a recall, we will take that step. We continue to work on this very important safety issue."