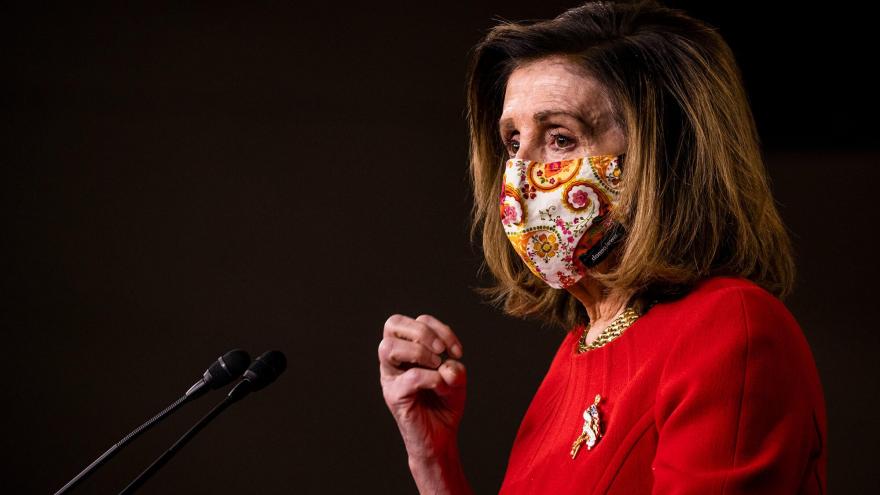 Speaker of the House Nancy Pelosi pictured here on February 11 in Washington, DC as she announces in a letter to House Democrats plans for the creation of a "9/11-type commission" to investigate the January 6 attack on the US Capitol.

(CNN) -- House Speaker Nancy Pelosi announced in a letter to House Democrats on Monday plans for the creation of a "9/11-type commission" to investigate the January 6 attack on the US Capitol.

Pelosi has previously called for the formation of such a commission and said she believes there is a need for it.

A commission of this nature would be established by a statute, passed by both chambers and signed into law by the President. The commission members would not be elected leaders and would be outside the government.

In a separate letter to House Democrats earlier this month, Pelosi wrote that it is "clear that we will need to establish a 9/11-type Commission to examine and report upon the facts, causes and security relating to the terrorist mob attack on January 6."

The deadly attack prompted House Democrats to move swiftly to impeach former President Donald Trump in January. The Senate impeachment trial of the former President concluded over the weekend, and ended in Trump's acquittal on a single charge of incitement of insurrection.

Efforts to shore up security at the Capitol and shed light on what led to its breach by a violent, pro-Trump mob on January 6 are still ongoing, however.

In mid-January, Pelosi announced that retired Lt. General Russel Honoré will lead a review of the "security infrastructure" of Capitol Hill in the wake of the attack.

"For the past few weeks, General Honoré has been assessing our security needs by reviewing what happened on January 6 and how we must ensure that it does not happen again," Pelosi wrote in her letter on Monday.

"He has been working with Committees of Jurisdiction and will continue to make proposals. It is clear from his findings and from the impeachment trial that we must get to the truth of how this happened," she said.

Earlier this month, Pelosi told reporters as she left a news conference that a 9/11-style commission to investigate the insurrection would look "different" than the one formed following the September 11, 2001, terror attack -- and would have a greater emphasis on diversity.

"Different from 9/11. What were there, nine people? All white, one woman. It will look different," she said at the time.

Although Pelosi complimented the 9/11 commission, she said that now "it's a different world."

Asked then about who she had in mind to serve on the commission, Pelosi confirmed that members would not be serving on it, saying, "It's an outside commission."