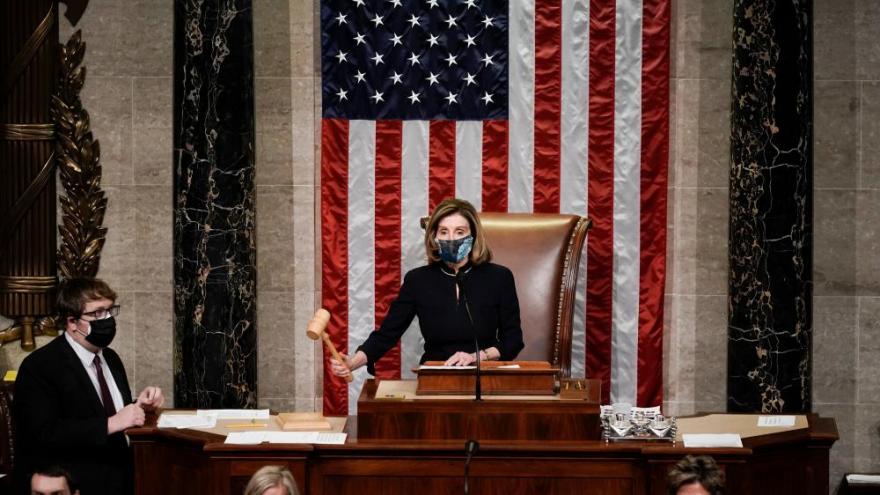 Speaker of the House Nancy Pelosi, gavels in the final vote of the impeachment of President Donald Trump, for his role in inciting an angry mob to storm the Congress last week, at the Capitol in Washington, on January 13.

"To protect our Democracy, we must now subject the security of the U.S. Capitol Complex to rigorous scrutiny," Pelosi said in a statement. "To that end, I have asked Lt. General Russel Honoré (Ret.), a respected leader with experience dealing with crises, to lead an immediate review of the Capitol's security infrastructure, interagency processes and procedures, and command and control."

Pelosi said in her announcement that Honoré "has strong experience with the security of the National Capital Region" and noted that members of House leadership worked with him "during Katrina and saw firsthand his strategic and patriotic leadership."

Honoré was dispatched to lead the Defense Department's response to Hurricanes Katrina and, later, Rita.

A biographical section of the retired lieutenant general's website says, "Prior to his command of Joint Task Force-Katrina -- leading the Department of Defense response to hurricanes Katrina and Rita in Alabama, Mississippi, and Louisiana -- General Honoré served in a variety of command and staff positions which focused on Defense Support to Civil Authorities and Homeland Defense."

The attack at the Capitol has left members of Congress furious and shaken with many fearing for their lives during the riots. The Democrat-led House moved swiftly this week to impeach President Donald Trump for inciting an insurrection, a vote that received bipartisan support with a handful of Republicans crossing party lines to support impeachment.

Pelosi addressed efforts to secure the Capitol in the wake of the deadly siege at a press conference Friday, saying, "Following the attack last week on the Capitol complex, there has been unprecedented mobilization of security in the Capitol. I want to express gratitude to our Capitol police, to the National Guard who are present here to protect our democracy."

The Capitol riot took place after Trump repeatedly made false claims that the election had been stolen from him and urged his supporters to fight back.

In the wake of the deadly siege, security has been intensely ramped up at the Capitol ahead of President-elect Joe Biden's inauguration, which is set to take place in just a few days on January 20.

Pelosi said during her news conference, "We must subject this whole complex to scrutiny in light of what happened and the fact that the inauguration is coming."

The House speaker added during her press conference, "Members are moving forward with strong oversight from committees, of course, to have after action review. There is strong interest in the Congress in a 9/11 type commission -- an outside commission to conduct that after action review. In the meantime I'm very grateful for general Honoré for taking on this responsibility."

Pelosi described Honoré as "a respected leader with experience dealing with crises."