House sends two articles of impeachment to the Senate 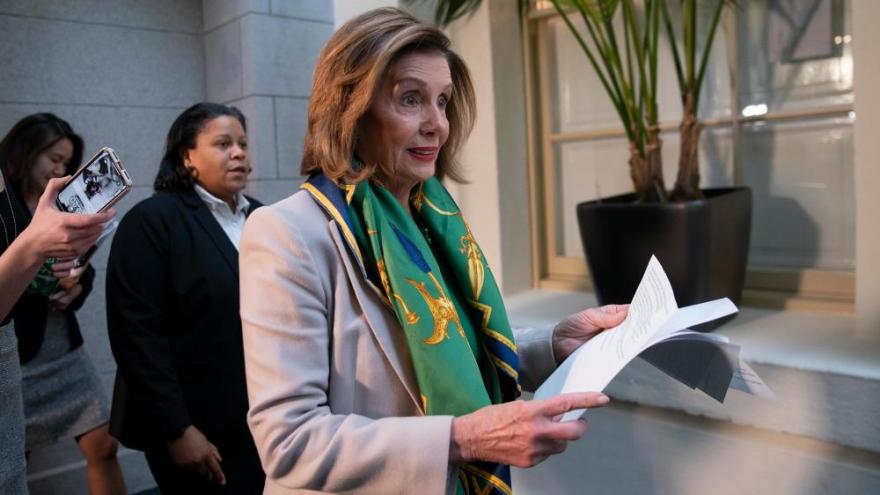 The House managers were met in the Senate by Majority Leader Sen. Mitch McConnell, who received the articles of impeachment.

(CNN) -- The House on Wednesday formally presented two articles of impeachment to the Senate after voting to approve the seven managers to prosecute the case against President Donald Trump, a long-awaited move that marks the beginning of the third Senate impeachment trial of a US President in history.

House Speaker Nancy Pelosi said that the House would "cross a threshold in history," at a signing ceremony for the impeachment articles, by "delivering articles of impeachment against the President of the United States for abuse of power and obstruction of the House."

The Senate is expected to formally receive the articles on Thursday morning before swearing in both Chief Justice John Roberts and US senators who will serve as the jury for Trump's trial.

The House passed its resolution shortly after the managers were revealed earlier Wednesday. The resolution formally appointed the managers, allocated funding for the trial and sent the articles of impeachment to the Senate, where senators will decide whether the President should be removed from office. The vote was approved mostly along party lines 228-193.

"As you can see from these descriptions, the emphasis is on litigators," Pelosi said in explaining how she chose the managers. "The emphasis is on comfort level in the courtroom. The emphasis is on making the strongest possible case to protect and defend our Constitution to seek the truth for the American people."

Wednesday's vote will kick off the ceremonial beginning of the Senate impeachment trial.

On Thursday, House managers are again expected to physically walk the articles to the Senate and read them aloud, according to a Republican leadership aide. The senators and Chief Justice John Roberts, who will preside over the trial, will also be sworn in, and the President will be officially summoned and given a time to respond to the charges.

Senate Majority Leader Mitch McConnell said the substance of the trial is likely to get underway on Tuesday, January 21.

Pelosi's announcement of the managers came four weeks after the House voted to impeach the President on two charges: abuse of power and obstruction of Congress. Following the approval of articles of impeachment, Pelosi took the unprecedented step to withhold sending the articles to the Republican-held Senate, saying she wanted to know more about the Senate trial parameters, creating uncertainty over the timeline for a trial and how it would unfold.

Pelosi and Schiff argued the delay has been effective in bringing new evidence to light.

"This time has given us the ability to show the American people the necessity of a fair trial to expose the degree to which McConnell is working hand in hand with the subject of impeachment, the President to essentially turn what should be a trial into a sham," Schiff said. "And that time has been I think very effective in not only bringing new evidence to light and the evidence was already overwhelming but also forcing senators to go on record."

But it's not clear whether Senate Republicans will be interested in the new developments. Sen. Susan Collins, a Maine Republican who is a key moderate and up for reelection this year, questioned why the House was only now releasing the information.

"I wonder why the House did not put that into the record and it's only now being revealed," Collins said. Told that Parnas just turned over the documents to the committee, she added, "Well doesn't that suggest that the House did an incomplete job then?"

The Intelligence panel sought records from Parnas in September, but he first refused to comply with a subpoena and then had to request a judge to agree for him to provide the materials to Congress.

"The Speaker lied when she claimed this was urgent and vital to national security because when the articles passed, she held them for an entire month in an egregious effort to garner political support," White House press secretary Stephanie Grisham said in a statement. "She failed and the naming of these managers does not change a single thing."

While Pelosi's press conference was in progress, Trump weighed in on Twitter: "Here we go again, another Con Job by the Do Nothing Democrats. All of this work was supposed to be done by the House, not the Senate!"

The way the Senate trial will ultimately unfold will depend on the full parameters for the trial, which have not been released yet. McConnell has said he's planning to follow the model of the 1999 impeachment trial of then-President Bill Clinton and decide on whether to include witnesses after opening arguments are made — and he has the votes to set the ground rules for the impeachment trial without Democrats' support.

The House managers are expected have a chance to argue their case before the full Senate, and after that, the President's lawyers will have an opportunity to present the defense. The opportunity to serve as an impeachment manager will offer a high-profile turn in the spotlight for the lawmakers who have been chosen and a chance to elevate their standing in Congress and with liberal voters.

Pelosi has said she wanted a team of mangers that reflected the diversity of the Democratic caucus across racial, gender and geographic lines. Most but not all of the managers had legal backgrounds before coming to Congress. And the House team includes a mix of veterans like Lofgren — a staffer during President Richard Nixon's impeachment inquiry and a lawmaker for during President Bill Clinton's impeachment — as well as two freshmen Democrats.

"I'm very proud of the managers that we have," Pelosi said Wednesday. "I believe that they bring to this case in the United States Senate great patriotism, great respect for the constitution of the United States, great comfort level in a courtroom, great commitment, again, to the Constitution."

Some moderate Democrats wanted Pelosi to consider Michigan Rep. Justin Amash, the only conservative member of the House to support impeachment, as a manager. Democratic Rep. Dean Phillips of Minnesota told CNN he was "disappointed" Amash wasn't picked to join the prosecution.

"As an attorney, former Republican, and the only independent member of the House of Representatives, he has articulated the constitutional rationale for impeachment as well as anyone in Congress, and his absence is a missed opportunity for a bipartisan management team," Phillips said.

Conviction in the Senate would require a two-thirds vote, a high threshold that is not expected to be reached given that many Republican senators have been vocal in saying that they believe the President's actions do not rise to the level of impeachment.

But regardless of the outcome, the Senate trial will be a historic and momentous event.

The performance of the House managers will shape how a trial plays out and could be a way for those who are chosen to secure their place in history as part of the impeachment proceedings.

There are no restrictions on the number of House impeachment managers the speaker can name to serve in the role.

In the Clinton trial, 13 House Republicans were chosen as impeachment managers.

Three are still serving in Congress to this day: Rep. Steve Chabot of Ohio, Rep. Jim Sensenbrenner of Wisconsin and Sen. Lindsey Graham of South Carolina, who was a representative of the state's third congressional district at the time of the Clinton impeachment.