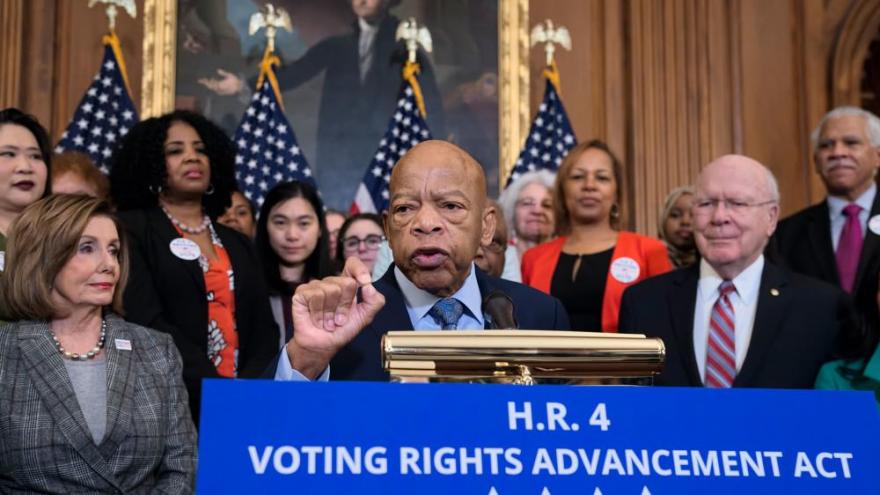 Pelosi announces that House will hold moment of silence for John Lewis.

(CNN) -- The House will hold a moment of silence for the late Rep. John Lewis on Monday, House Speaker Nancy Pelosi said in a statement, adding that more memorial plans for the longtime Georgia Democrat and civil rights icon will be announced later in the week.

"Today, the Georgia delegation, under the leadership of the dean of the delegation, Congressman Sanford Bishop, will honor John with a moment of silence and a bereavement resolution," Pelosi wrote in a letter to House members on Monday. Her deputy chief of staff, Drew Hammill, said in tweet that the moment of silence will take place shortly before noon.

Pelosi said in the letter that Lewis' family wants to wait until after memorial services take place on Thursday for civil rights leader Rev. Cordy Tindell "C.T." Vivian, who died the same Lewis died, to announce their memorial plans for the late congressman.

Pelosi, who worked alongside Lewis for more than 30 years, appeared to get choked up during an interview Monday morning in which she spoke about protesters who hurled racial slurs at Lewis and spat at one of his colleagues as they left the House chamber ten years ago during consideration of the Affordable Care Act. She said Lewis was "truly committed to nonviolence in every way," and he respected those who disagreed with him so vehemently that they mistreated him.

"He was just remarkable every single day," Pelosi, a California Democrat, told CBS. "He, again, challenged our conscience in so many ways in terms of equality and justice."

Following the death of Lewis on Friday at age 80, House Democrats have been discussing how to best honor him in Congress. Pelosi said Monday that "the appropriate way to honor" Lewis would be for the Senate to approve legislation to restore the Voting Rights Act, which was weakened after the Supreme Court struck down a key part of it in 2013.

She added in an interview with MSNBC that it's "hard to comprehend" why Republicans in the Senate won't take it up, but "maybe now they see a path" to doing so.

Senate Majority Leader Mitch McConnell, a Kentucky Republican, has refused to bring up for a vote legislation that would restore the part that was struck down. The House passed the measure in December with just one Republican vote.