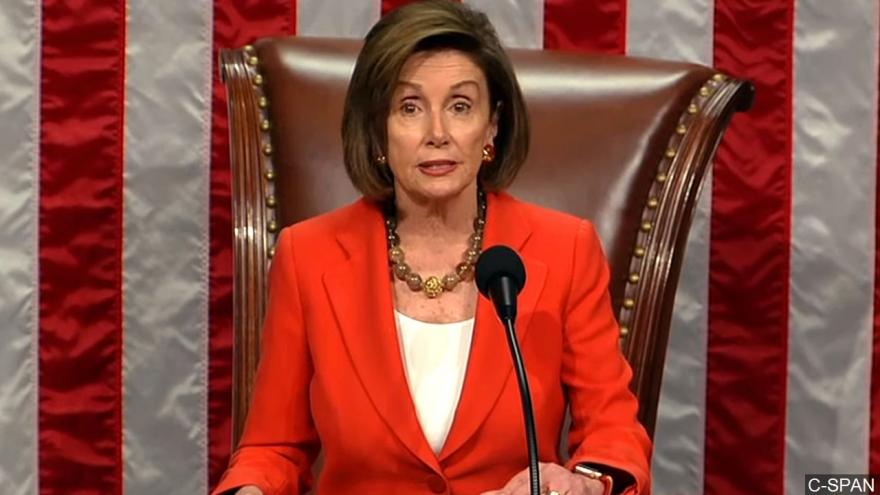 (CNN) -- House Speaker Nancy Pelosi on Sunday defended her decision to delay the Senate impeachment trial as the House prepares to formally transfer the two articles.

"What we did want, though, and we think we accomplished in the past few weeks, is that we wanted the public to see the need for witnesses," Pelosi said in an interview on ABC's "This Week." "Witnesses with firsthand knowledge of what happened. Documentation, which the President has prevented from coming out to the Congress, as we review this."

"Now the ball is in their court to either do that or pay a price," she added later.

The House needs to pass a resolution naming impeachment managers before the articles are formally sent to the Senate, and the chamber will also have to take procedural steps before the trial gets underway.

That's how Pelosi referred to Senate Majority Leader Mitch McConnell' support for a resolution to dismiss the two articles of impeachment against President Donald Trump.

McConnell signed onto a resolution from Republican Sen. Josh Hawley of Missouri last week to allow for the dismissal of the obstruction of Congress and abuse of power charges against Trump because Pelosi has not yet transferred the articles to the Senate for a trial. Republicans don't have the votes to dismiss the articles.

After former national security adviser John Bolton shook the capital last week when he said he is prepared to testify at Trump's impeachment trial, should he be subpoenaed to do so, the team planning for Trump's Senate trial believes there are "significant and important" executive privilege issues regarding Bolton's potential testimony, according to a source familiar with the team's discussions.

The source told CNN that the Senate trial team sees Bolton's possible testimony as going "to the heart" of the President's constitutional powers under Article II.

Bolton would be a critical witness due to his firsthand knowledge of many of the events that led to Trump being impeached over his dealings with Ukraine.

As CNN's Marshall Cohen notes, his testimony could shed light on a range of details from other witnesses who testified in the House impeachment inquiry.

It's also likely there is even more for Bolton to share, including things that aren't yet public, but it's hard to know for sure.

Iowa registered voters are divided over whether the House made the right move in impeaching Trump -- and a plurality say he should not be removed from office, according to a new CNN/Des Moines Register/Mediacom poll.

Overall, 45% say they disapprove of the House's move to impeach Trump, whereas 43% approve. There are sharp partisan divides on that question, with about nine in 10 Democrats saying they approve (87%) as a similar share of Republicans disapprove (90%). Among independents, more disapprove of the impeachment (48%) than approve (39%).

Remember: In three weeks, Iowa caucusgoers will become the first in the nation to signal their preferred candidate and kick off the presidential primary season.

While Trump carried Iowa by a comfortable 9.4 percentage point margin in the 2016 presidential election, Saturday's poll suggests he may have a tough time holding it again.

So where does Iran come in? Well, presidents have historically seen a bump in their approval ratings during a military crisis. Just look at President Bill Clinton in December 1998 who launched days of airstrikes against Iraq, spiking his poll numbers from 63% before the airstrikes to 73% the week after.

Clinton's launch against Iraq shows many similarities to Trump's due to the impending impeachment trials for the presidents, but as CNN's Grace Sparks notes, the partisanship that has gripped the country in recent years will likely stunt that traditional polling bump previous presidents have enjoyed during a military crisis.

Trump was impeached by the House of Representatives. Therefore, he obviously lost the impeachment battle in the House.

That did not stop him from telling reporters, on New Year's Eve, that "we won 196 to nothing."

It's worth noting the President's public boasts about having "won" impeachment come alongside some sobering complaints that acknowledge the gravity of being impeached.

"Why should I have the stigma of Impeachment attached to my name when I did NOTHING wrong?," Trump tweeted Sunday morning. "Read the Transcripts!"