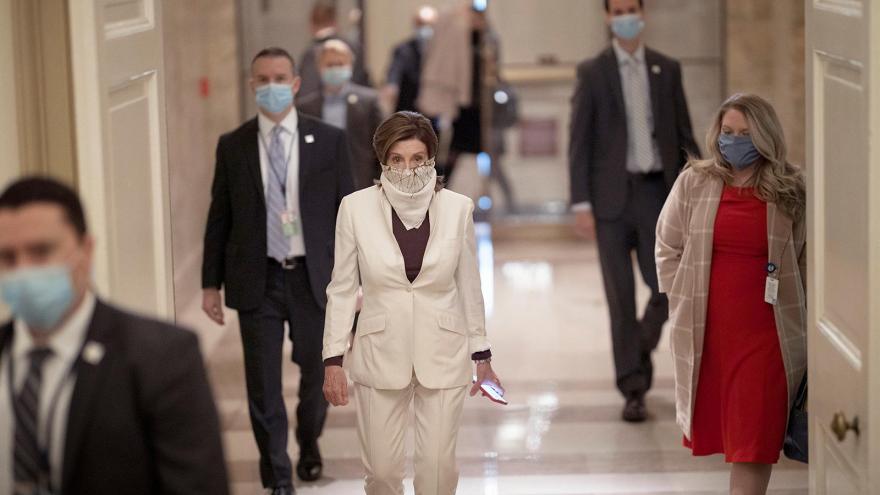 U.S. Speaker of the House Nancy promised again that Congress will deliver yet another coronavirus relief package that will provide "significant" money for state and local governments that have been stretched thin by their response to the crisis.

(CNN) -- House Speaker Nancy Pelosi promised again on Sunday that Congress will deliver yet another coronavirus relief package that will provide "significant" money for state and local governments that have been stretched thin by their response to the crisis.

Pelosi, in an interview with CNN's Jake Tapper on "State of the Union," disputed the suggestion that Democrats made a concession by passing an interim stimulus bill last week that did not include funding for state and local governments -- an initial sticking point for her party. Democrats would fund states and municipalities in the next piece of stimulus legislation, she said.

"Just calm down," the California Democrat told Tapper. "We will have state and local and we will have it in a very significant way."

Asked about New York Gov. Andrew Cuomo's recent comments that he would have "insisted" on including the aid in the latest package, Pelosi said that "it's no use going on to what might have been."

"The governors are impatient. I'm a big fan of Gov. Cuomo, my own governor, Gavin Newsom, has been so spectacular, my mayor ... State and local have done their jobs magnificently. They should be impatient, their impatience will help us get an even bigger number," she said.

The comments come as congressional Democrats have begun to outline their priorities for a new bill that would include substantial funding for state and local governments, which has been a point of contention between Democrats and Republicans in the relief talks.

While Pelosi insisted on Friday that congressional efforts to deliver coronavirus relief are not finished, saying a forthcoming bill will be "expensive," Senate Majority Leader Mitch McConnell cautioned last week that lawmakers need to take into account "the amount of debt we're adding to our country and the future impact of that."

McConnell took a hard line Wednesday against more funding for state and local governments, saying Republicans are not interested in "revenue replacement for state governments" or "solving their pension problems." And the Kentucky Republican said in a radio interview last week that he "would certainly be in favor of allowing states to use the bankruptcy route." McConnell's suggestion would require legislation to allow states to do so.

Asked how much funding for state and local governments she would like to see in another bill, Pelosi said, "Probably a number equivalent to what we've done for small businesses."

Congress has approved more than $600 billion for the Paycheck Protection Program, the high demand small business loans measure included in the $2.2 trillion CARES Act in March.