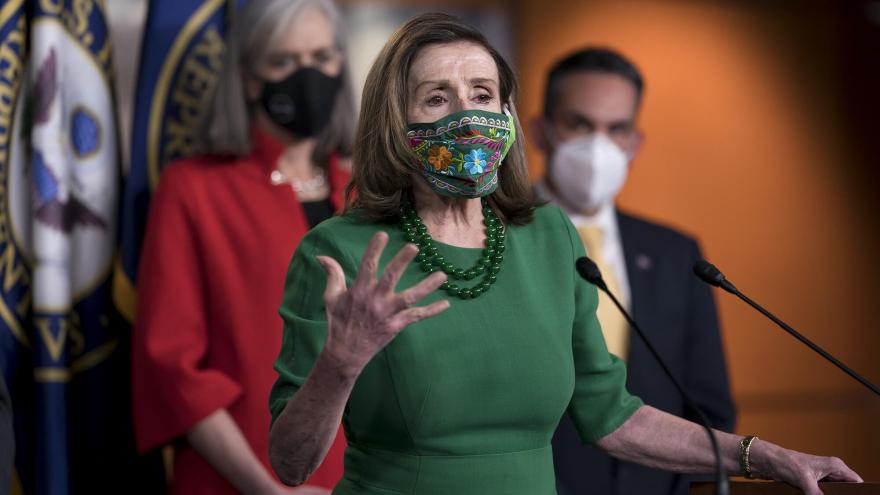 Two controversial projects will be pulled from the Covid-19 relief bill, House Speaker Nancy Pelosi's office confirmed on Tuesday. In this image, Pelosi speaks to the media at the Capitol in Washington, Friday, February, 26.

(CNN) -- Two big projects originally slated to be part of the Covid-19 relief bill but criticized as being unrelated to coronavirus relief will be pulled from the package, House Speaker Nancy Pelosi's office confirmed to CNN on Tuesday.

The original bill, passed by the House, included $1.425 billion in funding to help with transit rail capital projects, including the extension of the Bay Area Rapid Transit line from San Jose to Santa Clara, California. It had been part of $30 billion in support for public transportation in the relief package, but Pelosi's office said Tuesday that the Senate parliamentarian had ruled against its inclusion because it was part of a pilot project.

The relief package will also no longer include funding for the Seaway International Bridge in upstate New York. The $1.5 million in funding had been proposed during the Trump administration and supported by Republican Rep. Elise Stefanik, whose district includes the bridge.

A Senate source told CNN that the request to including funding for the bridge in the relief legislation was originally made by the Department of Transportation under the Trump administration in spring 2020 and that Senate Majority Leader Chuck Schumer, a New York Democrat, hadn't known the funding was in the bill until he read about it in media reports.

Republicans have held up both projects as examples of spending in the bill that would benefit the Democratic leaders' districts and home states and have very little to do with helping Americans recover from the Covid-19 pandemic. Stefanik did not support the relief bill and said the funding for the bridge should not have been included.

The BART extension is not in Pelosi's California district and would have occurred 50 miles south of the area she represents.

Pelosi spokesman Drew Hammill said Tuesday that Covid had "an immediate and overwhelming effect on all of our transportation systems and the millions of transportation and construction jobs associated with them," but now with the two projects removed, he added, "it is unclear how Republicans will justify their opposition" to the legislation.