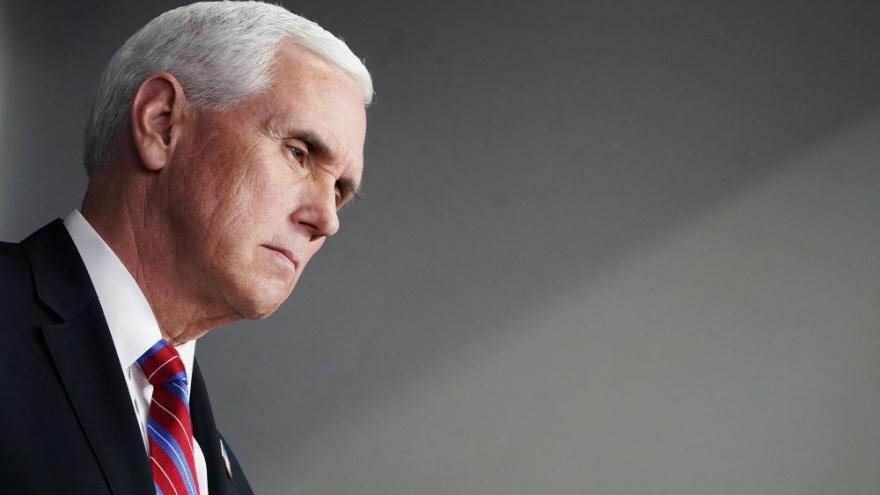 Vice President Mike Pence is set to travel to Colorado to speak at the US Air Force Academy's commencement, even as much of the country remains shutdown and many colleges forgo in-person graduation events amid coronavirus concerns.

(CNN) -- Vice President Mike Pence traveled to Colorado Saturday to speak at the US Air Force Academy's commencement, even as much of the country remains shut down and many colleges forgo in-person graduation events amid coronavirus concerns.

The commencement ceremony, though, didn't look like it has in years past. There were no spectators, cadets marched six feet apart and sat at least eight feet apart during the ceremony -- along with the guests on the stage.

The unusualness of Saturday's ceremony was not lost on the vice president.

"I know we gather at a time of great challenge in the life of our nation, and you all here in the pursuit of your commission and the service of this nation have been through a lot. And while we don't quite look like the usual graduation at the Air Force Academy, let me tell you this is an awesome sight," Pence said in his address Saturday, adding that he "wouldn't be anywhere else" but with the 62nd class of the Air Force Academy.

The trip marks a rare public outing for a White House that has remained largely grounded in Washington, DC, with Pence and President Donald Trump skipping everything from campaign events to the weekend travel Trump frequently takes to visit his properties in West Palm Beach, Florida, and New Jersey in line with recommendations from federal health experts that Americans avoid all kinds of travel and gatherings larger than 10 to stem the spread of coronavirus.

When Trump and Pence have attended events at the White House, visitors have typically been spaced the recommended six feet apart. The White House also recently announced that anyone expected to come into close contact with the President and vice president would receive a rapid Covid-19 test, and all people entering the White House, including the press, have their temperatures taken.

"America is being tested," the vice president said during his remarks to the graduating class, adding, "But as each of you has shown, and as Americans always shows in challenging times, when hardship comes, Americans come together. We rise to the challenge."

There were many noticeable changes to Saturday's solemn ceremony for an institute steeped in tradition. The event was moved up several weeks from its original date in May and relocated from Falcon Stadium to a larger space for social distancing. Families and friends weren't allowed to watch the ceremony in-person, and just a small number of faculty were permitted to view the event from afar.

One tradition that did remain -- Thunderbirds flew over the ceremony as the graduates tossed their hats in the air. But almost immediately, after cheers of celebration, the graduates put masks over their faces.

Pence had at one point planned a video announcement at the Air Force Academy commencement, but a spokesperson for the vice president said he decided to travel to Colorado Springs, Colorado, to deliver his remarks since the academy was forging ahead with an in-person ceremony.

Upon his arrival in Colorado on Saturday morning, Pence was greeted on the tarmac by Gov. Jared Polis, a Democrat, who donned a mask over his face.

Trump on Friday praised Pence's decision to appear at the ceremony, while also announcing his own plans to speak at a West Point commencement next month.

This year's class included 984 senior cadets who were commissioned as second lieutenants, 90 of whom will serve in the Space Force, according to the academy. An Air Force Academy spokesperson told CNN that there are no cases of the novel coronavirus in the cadet wing.

"While the US Air Force Academy is an institution of higher education we are also a military installation, and unlike most students across the country, our cadets live here and have been in a mostly closed environment for the past 6 weeks," the spokesperson told CNN. "We have gone to great lengths to keep our cadets healthy. ... Because of these measures, we have no (Covid-19) cases in the cadet wing, which gives us confidence in moving forward with a greatly pared down version of our traditional graduation ceremony."

Ahead of the ceremony, the Air Force Academy spokesperson said cadets on Saturday will take their oaths knowing full well that many graduates around the country are not able to celebrate their milestones in the same way.

"It's not the graduation ceremony the class of 2020 has dreamed about for four years," they said, "but it will allow them to celebrate joining the ranks of the Air and Space Forces together as a class while maintaining the required distance and precautionary measures that have become part of all of our daily lives."