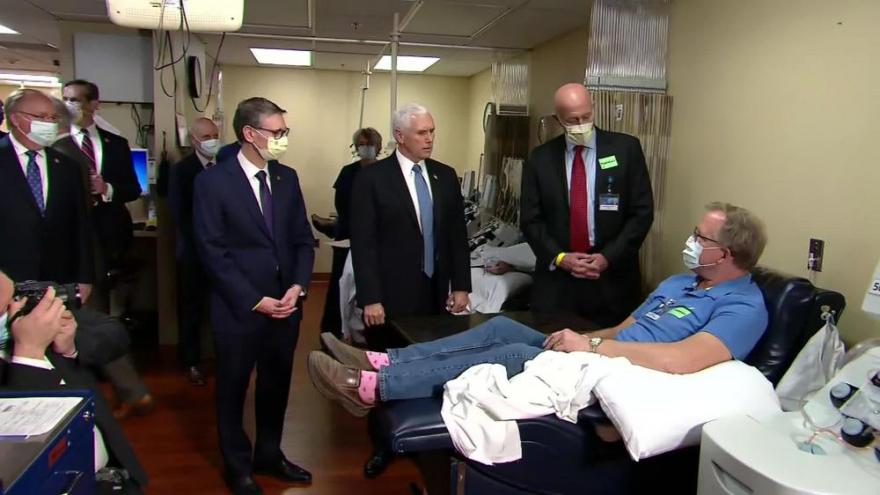 When Vice President Mike Pence walked into the Mayo Clinic, he wasn't wearing a face mask.

(CNN) -- When Vice President Mike Pence walked into the Mayo Clinic on Tuesday, he wasn't wearing a face mask.

Everyone else in the building was, according to reporters who were traveling with him. After all, it has been the policy at the renowned Rochester, Minnesota, facility since April 13. They even say they'll provide one.

Pence was told of the new rules before he visited, the clinic said on Twitter, a post that was subsequently deleted.

"Mayo Clinic had informed @VP of the masking policy prior to his arrival today," they had written.

But as he visited a blood and plasma donation center inside the building, Pence was bare-faced.

Others in the room -- including Dr. Stephen Hahn, the Food and Drug Administration head -- wore coverings.

The Mayo Clinic briefed Pence's team in the last several days about the clinic's policy requiring face masks, a person involved in planning the visit told CNN. The briefing came after the White House reached out last week about a potential visit. The person said when the clinic told the White House about the policy, it wasn't clear whether Pence would wear a mask.

When Pence and the team, including reporters, arrived at the clinic, personnel from the facility had masks available for the group, including Pence. During the tour, the rest of the entourage wore masks except Pence.

Another source familiar with discussions said it is clear that -- despite what the vice president said in defending himself and not wearing a mask -- Pence's staff understands now it was a mistake. News reports after the visit focused on whether he wore a mask instead of the work being done at the Mayo Clinic, and Pence's staff believes they should have made sure he wore one to avoid such a news cycle, the source said.

Pence did avoid shaking hands; he elbow-bumped instead with doctors and officials.

But he was mask-less as he thanked workers, conferred with hospital administrators and spoke with a Mayo Clinic employee who was donating plasma after being diagnosed with Covid-19 at the end of March.

Afterward, Pence told reporters that he wasn't wearing a mask because he's often tested for coronavirus.

"Since I don't have the coronavirus, I thought it'd be a good opportunity for me to be here, to be able to speak to these researchers these incredible health care personnel and look them in the eye and say thank you," he said.

In an update its website on April 13, the Mayo Clinic said it was requiring "all patients and visitors to wear a face covering or mask to help slow the spread of COVID-19." It did not distinguish between visitors who had been tested for coronavirus and those who hadn't.

"Patients and visitors are asked to bring their own face covering or mask to wear. If a patient or visitor does not have a mask, Mayo Clinic will provide one," the website reads.

The guidance is based on recommendations from the Trump administration. The CDC recommended in early April that Americans consider wearing face coverings when in public to help prevent the virus spread from asymptomatic carriers. For roughly the past month, Pence has been getting tested weekly for the virus.

In announcing the new guidance, however, President Donald Trump repeatedly highlighted the recommendations weren't mandatory. And he said he would not partake.

"I don't think I'm going to be doing it," he said, going on to suggest it was hard to envision such a thing in the Oval Office: "Wearing a face mask as I greet presidents, prime ministers, dictators, kings, queens -- I just don't see it."

After the Mayo Clinic deleted its tweet saying it had advised Pence of the mask policy, a new message appeared thanking him for visiting.

"We look forward to continued collaboration to develop essential testing and treatment for our patients and communities," the new tweet read.