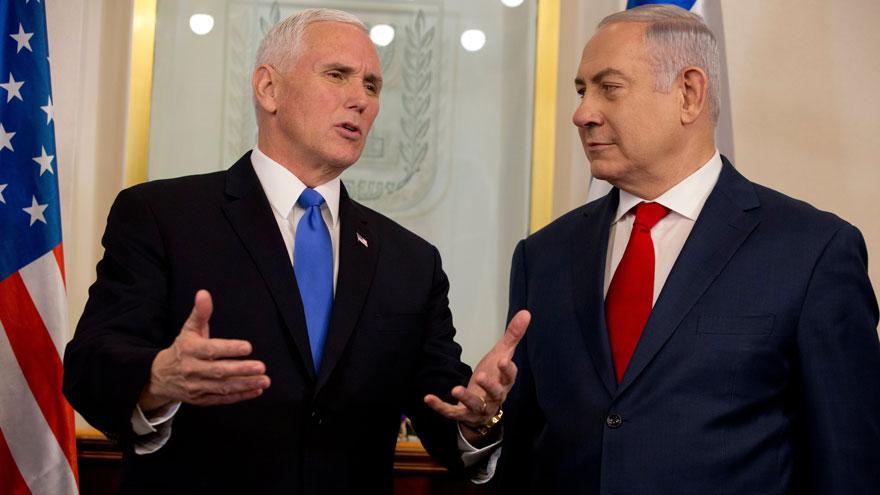 (CNN) -- The US will open its embassy in Jerusalem by the end of 2019, US Vice President Mike Pence said Monday in Israel's parliament, confirming that the controversial move is speeding up after officials earlier said it could take three to four years.

Pence told Israeli lawmakers that Jerusalem was "the capital of the state of Israel," reiterating President Donald Trump's change of policy last month.

At the same time, Trump announced plans to move the US embassy from Tel Aviv to the holy city, upending seven decades of US policy.

Both Israelis and Palestinians consider Jerusalem as their capital, and Pence's address is likely to further rattle the Muslim world.

"I am here to convey a simple message from the hearts of the American people -- America stands with Israel."

Israeli Prime Minister Benjamin Netanyahu heaped praise on Pence, thanking him and Trump for their support.

But not everyone in the Knesset was happy to see Pence. Arab lawmakers staged a protest at the start of his speech and scuffled with security officials before walking out.

One of the lawmakers, Ayman Odeh, called Pence on Twitter "a dangerous racist whose whole reason for being here is in order to damage any chance of peace."

In comments earlier Monday at the Prime Minister's office, Pence had said that the recognition of Jerusalem as the Israeli capital did not mean the US was abandoning the peace process.

"(I am) hopeful that we are at the dawn of a new era, of renewed discussions to achieve a peaceful resolution to the decades-long conflict that has affected this region," he said, later adding that the US was still open to a two-state solution if both Israelis and Palestinians agreed to it.

The US' recognition of Jerusalem as the capital of Israel has prompted concerns that it could derail any attempts to restart a peace process, and cast further doubt on the likelihood of any two-state solution being reached.

Palestinian Authority President Mahmoud Abbas has repeatedly condemned and rejected Trump's decision, saying, among other things, that it would aid extremist organizations to wage holy wars.

The United States Congress in 1995 passed a law requiring the US to move its embassy from Tel Aviv to Jerusalem. But all US presidents before Trump have resisted acting on the law, signing a waiver in the national interest.

Pence, an evangelical Christian, also used his moment in the Knesset to criticize Iran for being what he called the leading sponsor of terrorism, while also peppering his remarks with passionate biblical references and highlighting Christianity's roots in the region.

He lambasted the 2015 Iran nuclear deal brokered by the Obama administration, which has seen the country restrict its nuclear program in exchange for the easing of sanctions.

"The Iran nuclear deal is a disaster, and the United States will no longer certify this ill-conceived agreement," Pence said.

"Earlier this month, the President waived sanctions on Iran to give the Congress and our European allies time to pass stronger measures. But as President Trump made clear, this is the last time," he said, adding that the US was working on other ways to curb Iran's nuclear and ballistic missile program.

The US president must sign waivers and certify the deal every few months.

Trump signed off on a sanctions waiver earlier this month, essentially keeping the nuclear deal intact, but he has in the past chosen to not certify it, a decision that could lead to new US sanctions on the country.