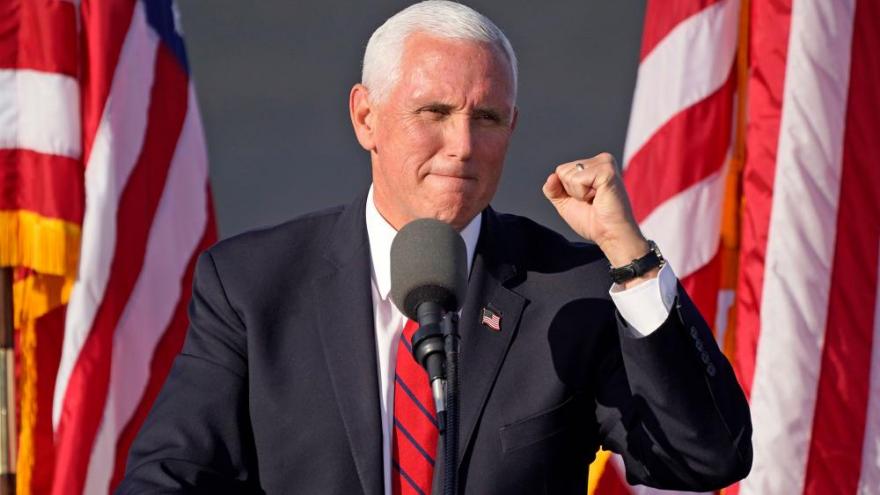 (CNN) -- Vice President Mike Pence, despite flouting public health guidelines by still campaigning after being exposed to people testing positive with coronavirus, is taking some precautions on the road.

At least five people on his staff, including his bodyman and Marc Short, his chief of staff, tested positive, but Pence insists on maintaining an aggressive campaign schedule in the final week of the race. So far, Pence has tested negative for Covid, according to CNN reporting.

His decision to press ahead with travel plans that will have him crisscrossing the country runs contrary to US Centers for Disease Control and Prevention guidelines that recommend self-quarantine in the event of close contact with a Covid-19-positive person. And the move has drawn scrutiny given Pence's role as head of the White House coronavirus task force.

According to the CDC, individuals should quarantine if they have been in "close contact" with another person who has Covid-19 -- if a person was "within 6 feet of someone who has Covid-19 for a total of 15 minutes or more."

Pence will not do any rope lines or greetings with supporters after his campaign speeches over the next few days and will simply leave after he makes remarks, a person familiar with the plans said. The vice president typically does between one and three local interviews in the battleground states that he visits, but will not be allowing any for the next few days as well.

He will travel with a "much more slimmed-down team" given that Short and other aides have tested positive for the virus, his press secretary is quarantining and his communications director is at the end of her pregnancy. White House chief of staff Mark Meadows told CNN on Sunday that Pence had also committed to wearing a mask during his travels except when he is speaking onstage -- previously, a maskless Pence has been a frequent sight on the campaign trail to date.

Pence was also scheduled to preside over the final confirmation vote for Judge Amy Coney Barrett, who is poised to become a Supreme Court Justice on Monday. However, an aide said Pence would only go to the Senate if his vote was needed as a tie-breaker due to his campaign schedule.

Democrats had demanded Pence stay away from Capitol Hill due to his proximity to someone sickened by the virus.

Last week in Tallahassee, Pence said he intended to preside over the vote.

"The Senate is going to finish their work on Monday and you know, as vice president, I am president of the Senate. And I'm going to be in that chair cause because I would not miss that vote for the world," he said then.

Pence hit the road the day after Short tested positive for the virus, speaking in North Carolina amid criticism of the White House's decision to deem him "essential personnel" who does not need to quarantine despite the diagnosis of his close contact. He was set to travel to Minnesota on Monday, after testing negative for the virus on both Sunday and Monday.

A close adviser to Pence, Marty Obst, tested positive for Covid earlier last week after coming into contact with some of Pence's team. Obst is not a government employee. Although four other aides have tested positive, the person familiar with the situation said all but Short tested positive while quarantining after contact tracing was conducted in the wake of Obst's diagnosis.