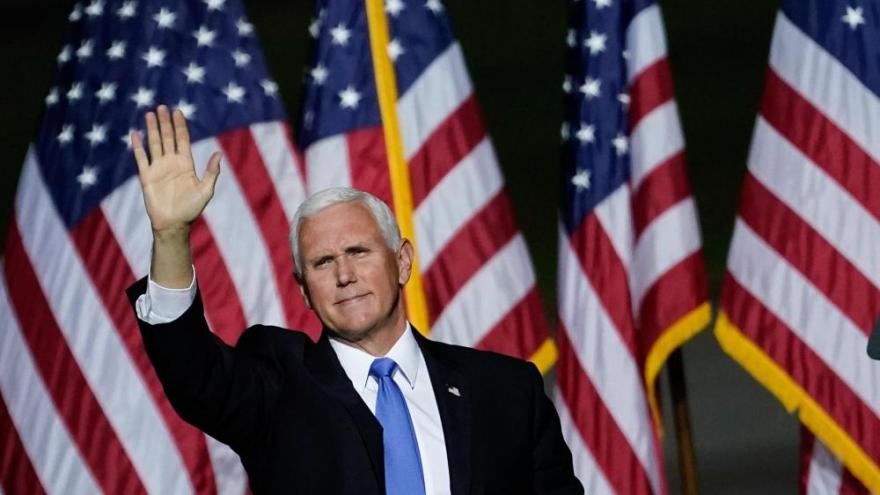 Vice President Mike Pence tested negative for Covid-19 again, an administration official said Saturday, after traveling to multiple states for indoor and outdoor events, participating in numerous White House events and meetings and having been in frequent close contact with President Donald Trump this week.

(CNN) -- Vice President Mike Pence has tested negative for Covid-19 a third time, an administration official said Sunday, after traveling to multiple states for indoor and outdoor events, participating in numerous White House events and meetings and having been in frequent close contact with President Donald Trump this week.

Trump's coronavirus diagnosis on Thursday night and subsequent hospitalization only heightens the duty Pence signed up for when he took his oath of office in 2017. As second in line to the presidency, the solemn obligation -- no matter the circumstances -- means that one must always be prepared to step into the role of commander-in-chief at a moment's notice.

But despite the clear need to keep the vice president completely safe and minimize any risk of contracting the virus, Pence is expected to travel on Monday ahead of the vice presidential debate. It's unclear how long the President will remain hospitalized, and whether he would still be at Walter Reed when Pence travels. His doctor would not put a date on his expected return to the White House.

Trump campaign senior adviser Jason Miller said during an interview with NBC News on Sunday that Pence is not changing his schedule in light of the President being hospitalized.

"We're in a campaign. We have a month to go. We see Joe Biden and Kamala Harris out there campaigning. Certainly they're not asking for a remote debate," Miller said. "Vice President Pence is following the debate, for the vice presidential candidates, on Wednesday. He will be hitting the trail...and he's going to have a very full aggressive schedule as will the first family...(we have) no concerns at all."

And there are still questions about his own health, given his proximity to Trump and others around him who have contracted Covid-19 and the length of time the virus takes to incubate. Pence, a designated "essential worker," is not planning to quarantine. In a memo released Friday, his physician Jesse Schonau said he does not need to do so because he was not considered a close contact with Trump or any of the other individuals who has tested positive. But the list of those who have tested positive continues to grow.

"Vice President Mike Pence remains in good health and is free to go about his normal activities," Schonau said in the statement.

Pence and second lady Karen Pence each have tested negative for the virus two additional times since Friday.

The US Centers for Disease Control and Prevention recommends that anyone who was within six feet of someone who has Covid-19 for more than 15 minutes should stay home for 14 days. Though it's unclear when the President was first contagious, Trump and Pence were together Sunday evening inside the East Room for an event with Gold Star families, also attended by first lady Melania Trump, who has also tested positive. Trump and Pence met in the Oval Office on Tuesday, and Pence was present for outdoor events in the Rose Garden with Trump on Saturday and again on Monday.

For Pence, it's business as usual, relatively. The vice president remained at his Naval Observatory home throughout the day on Friday after Trump's diagnosis, leading a call on vulnerable seniors with state and local officials.

"I know many of you were expecting to hear from President Trump today, but as I'm sure you are all aware, President Trump and the first lady tested positive for Covid-19 yesterday," Pence said as he began the call, adding that Trump "asked me to take this call today."

Pence is scheduled to remain at the Naval Observatory on Saturday, leading a meeting of the coronavirus task force at 2:30 p.m. Pence typically leads those meetings from the Situation Room of the White House, but will instead do so from his residence. Trump and Pence will continue to be in touch by phone Saturday, like most days, his office said.

On Monday, he will travel to Salt Lake City ahead of the vice presidential debate with his Democratic opponent, Sen. Kamala Harris of California. There are no plans, as of now, to postpone or cancel the debate.

The Commission on Presidential Debates and both campaigns agreed Friday to increase the space between Pence and Harris on the debate stage Wednesday night from seven to 12 feet.

And Pence's campaign travel is expected to continue, with little sign that the protocols will change to meet the needs of the moment. Though Pence's events are smaller in scale than Trump's campaign rallies, his campaign activities still actively fly in the face of recommendations from task force he leads. He wears masks, but inconsistently.

On Saturday morning, the campaign announced another "Make America Great Again! Event" led by Pence set for Thursday at TYR Tactical in Peoria, Arizona. It was not immediately clear whether that event would be inside the 78,000 square-foot facility or outdoors.

The campaign announced in a second statement Saturday that Pence "will begin a swing through key states following Wednesday's debate," including early voting in his home state of Indiana and "other events yet to be announced."

The travel push comes despite many public health experts who have warned that Pence should self-isolate rather than risk potential exposure.

Pence maintained a busy campaign schedule in the days before Trump's diagnosis. On Tuesday, he made remarks at a debate watch party in Lancaster, Pennsylvania.

On Wednesday, he attended a closed-press fundraiser luncheon inside the St. Regis hotel in Atlanta, followed by remarks to a few hundred people tightly clustered in a ballroom, largely not wearing masks, at a Faith and Freedom Coalition Policy Conference. Pence worked the rope line after the event, per the pool reporter, and did not wear a mask.

On Thursday, he traveled to Carter Lake, Iowa, for an indoor rally with more than 275 people, most of whom did not wear masks. This week's coronavirus task force report for the state of Iowa recommended the state, which has experienced weeks of rising cases and has the sixth highest rate of new cases in the country, "institute mask requirements statewide with reduced capacity for indoor dining and bars." Pence then traveled to Des Moines, Iowa, for a Faith in Leadership event, which was also indoors and a majority of attendees did not wear masks.