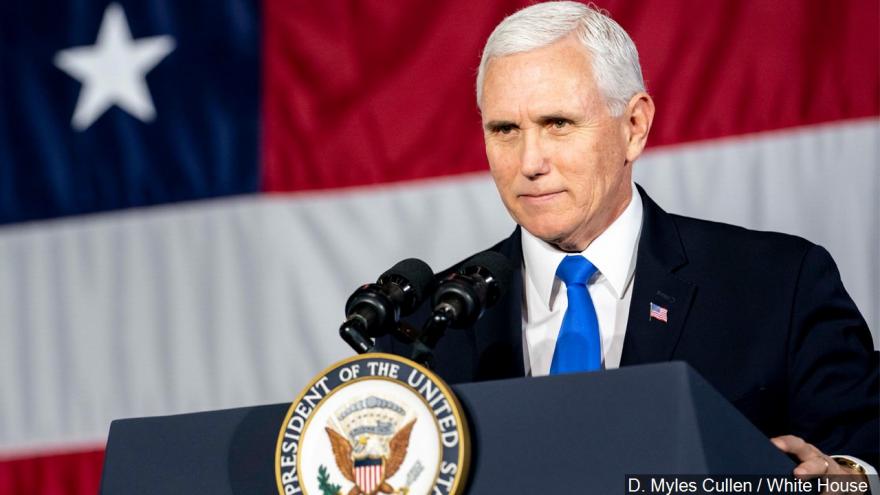 (CNN) -- When President Donald Trump appointed Vice President Mike Pence in charge of the US government's response to the novel coronavirus on Wednesday, he said the former Indiana governor had "a certain talent for this."

Pence indeed has executive experience during a public health emergency: he was governor from 2013 to 2017, when an HIV outbreak struck parts of his state. But his response to that crisis -- one different in several important ways from coronavirus -- is again under scrutiny as he works to coordinate the US effort to protect against worldwide calamity that is still unfolding.

The Indiana emergency peaked during Pence's governorship, when public health officials noticed a cluster of HIV and hepatitis C in rural Indiana around November 2014. It was the largest outbreak of the virus in the state's history, NPR reported at the time.

Free HIV testing had not been available in the community since a local Planned Parenthood clinic closed in 2013, and the virus had quickly spread among people in Scott County who were reusing needles to inject a prescription opioid called Opana. In 2017, at the US Food and Drug Administration's request, pharmaceuticals company Endo International took the powerful opioid off the market because it was widely abused.

The infections had reached 126 cases in a relatively small geographical area around January 2015, but it took until March of that year for Pence to declare a public health emergency.

"I am confident that together we will stop this HIV outbreak in its tracks," Pence said at the time.

One study that ran in The Lancet medical journal in 2018 found that if Pence had acted sooner, a quicker public health response could have substantially reduced the total number of HIV infections. What was needed, experts said, was a needle exchange program, which is controversial but has been strongly recommended by the Centers for Disease Control and Prevention as an impactful way of preventing transmission of disease among drug users. At the time of the Indiana outbreak, it was illegal under state law and opposed by Pence.

The then-governor eventually approved a short-term needle exchange program, the Indianapolis Star reported at the time, but only did so reluctantly.

"I do not enter into this lightly," he said, the Star reported. "In response to a public health emergency, I'm prepared to make an exception to my long-standing opposition to needle exchange programs."

The program was effective. Some 277 people enrolled in the program and more than 90,000 syringes were distributed and returned between April and October 2015, a study in the New England Journal of Medicine found, and the number of new HIV infections decreased.

At Wednesday's news conference announcing Pence's appointment, Trump said Indiana has established "great health care" in the Hoosier State. But during Pence's tenure as governor, Indiana only moved up the nationwide ranks slightly, remaining near the bottom of America's Health Rankings, a survey of how states manage health. In 2017, US News and World Report ranked Indiana 41 among states for health care.

Meanwhile, substance-use treatment in rural Indiana remained "woefully inadequate," according to a perspective piece written by public health experts for the New England Journal of Medicine that called the state's approach to the outbreak a "cautionary tale." The state's "suboptimal coverage" of HIV and hepatitis C testing also delayed people getting treatment and that allowed for more people to become infected, the medical journal piece said.

And the public health spending in Indiana for 2017 ranked near the bottom of states, according to the Trust for America's Health.

Reached for comment by CNN, Pence's office pointed to an October 2019 op-ed written by Joey Fox, a former legislative director for Indiana's state health department, who defended Pence's response. In particular, Fox noted that needle exchange programs were illegal in Indiana before Pence took office and that it took time to effectively implement the program when Pence made it available.

"Acting as if the community refused to use a proven public health tool is disingenuous at best. The tool was illegal. Law had to be changed. The Governor intervened by executive order. The legislature passed a bill changing the law on the final night of the session, and Governor Pence signed it shortly thereafter," Fox wrote.

Pence's office also directed inquiries to the office of US Surgeon General Jerome Adams, who served as Indiana's state health commissioner during the HIV crisis. Adams' office did not immediately return a request for comment.

The vice president is scheduled to discuss coronavirus in an appearance with Sean Hannity on Fox News Thursday night.

Some Democrats, including House Speaker Nancy Pelosi, have pointed to Pence's record in Indiana to criticize Trump's decision to put him in charge of the government response.

"Do keep in mind that this vice president has dealt with a public health emergency before, in Indiana. And what was his approach? It was to put politics over science and let a serious virus expand in his state and cost people lives. He is not the person who should be in charge," she said.