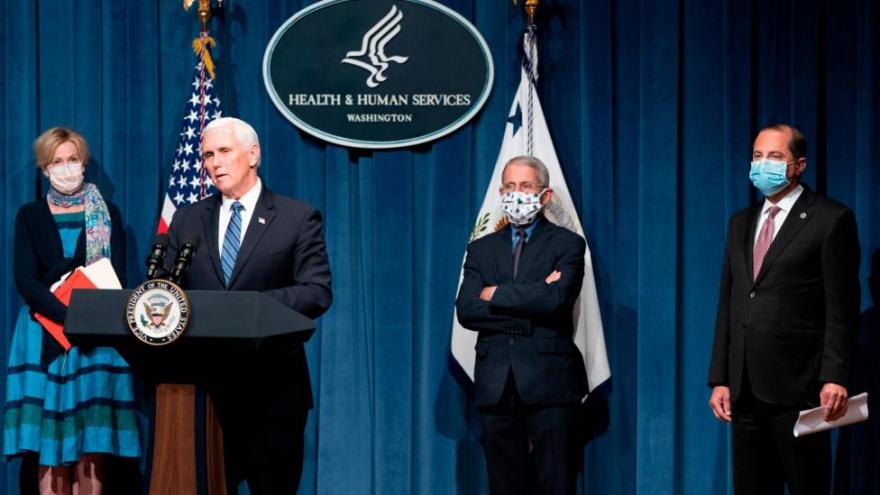 Pence's office says he did not attend Amy Coney Barrett's swearing-in due to CDC guidelines.

(CNN) -- Vice President Mike Pence did not attend Monday night's White House swearing-in ceremony for Supreme Court Justice Amy Coney Barrett because he was adhering to US Centers for Disease Control and Prevention guidelines to prevent the spread of the coronavirus, an administration official told CNN.

Asked why Pence did not attend the ceremony, the official said in a statement: "As has been the case, the vice president has been adhering to the CDC guidelines for essential personnel."

The decision comes days after five Pence aides, including his bodyman and Marc Short, his chief of staff, tested positive for coronavirus.

In the wake of the cases among his staff, Pence has insisted on maintaining an aggressive campaign schedule -- a decision which runs counter to the CDC's guidelines recommending individuals self-quarantine in the event of close contact with a person who has tested positive for coronavirus.

And though Pence has been heeding the guidelines at the events himself, he continues to host campaign events that actively ignore CDC guidelines on mask usage and social distancing among his supporters.

So far, Pence and second lady Karen Pence have continued to test negative for the virus. But Pence's decision to continue to travel, given that he leads the White House's coronavirus task force, has drawn scrutiny.

The administration official underscored that Pence is taking precautions on the road, saying that the vice president "has been wearing a mask on the helicopter, airplane, off the plane and onto the stage, in his cabin."

The official also noted that Pence's regional media interviews have been canceled and during rallies, "When he removes his mask on stage he is greater than 20 feet from the audience."

A person familiar with the vice president's plans previously told CNN that the team traveling with Pence is slimmed down. Pence will also nix any rope lines or greetings with supporters at the events.

The White House has defended Pence's continued travel and work as part of his duties as an essential worker. And while that may apply to his work in his official capacity as vice president and head of the coronavirus task force, it's not clear how continuing to campaign falls under those duties.

The vice president has also been inconsistent in his adherence to the CDC's guidelines.

Pence returned to Washington, DC, from the campaign trail in order to be available in case a tie-breaker was needed for Barrett's confirmation vote. Democrats discouraged the vice president from coming near Capitol Hill for the vote.

Prior to the cases among his staff, a maskless Pence has been a frequent sight on the campaign trail.

But Monday night's White House event for Barrett marked one of the first times the White House has implemented social distancing protocols and mandated mask-wearing.

The event came a month after a White House Rose Garden event to announce Barrett's nomination -- which has been labeled by public health experts as a coronavirus superspreader event. Attendees sat outdoors, shoulder-to-shoulder during the event, infrequently wore masks and were generally not practicing social distancing.

At least a dozen people who were at the announcement in late September confirmed they had contracted the coronavirus shortly after their attendance.