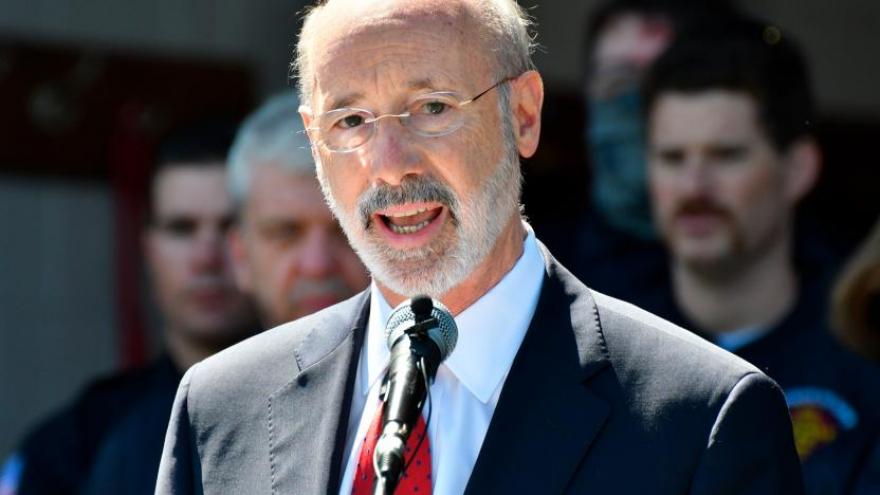 Pennsylvania Gov. Tom Wolf speaks at an event Wednesday, May 12, 2021, in Mechanicsburg, Pa.

(CNN) -- Pennsylvania Gov. Tom Wolf on Wednesday vetoed a Republican-backed election overhaul bill that would tighten election deadlines and expand voter identification requirements, among other changes, in the latest battle between Democrats and Republicans over voting rights.

"I made it clear I wouldn't sign a bill that creates barriers to voting," Wolf, a Democrat, tweeted in announcing his veto. "But that's exactly what this bill does by: Limiting mail ballots, Capping early voting, Cutting voter registration time."

As of mid-June, 17 states had enacted 28 new laws this year that limit access to the ballot box, according to the Brennan Center for Justice at New York University.

Calling it "the latest scheme by Republican legislators to suppress your freedom to vote," Wolf on Wednesday acknowledged that the bill does include some measures both he and election officials had requested.

He, however, concluded, "This bill is ultimately not about improving access to voting or election security, but about restricting the freedom to vote."

The state's Republican-led General Assembly passed the election bill on Monday, with its House GOP sponsors arguing that the bill would improve security, uniformity and public trust in elections. Republicans had introduced the expansive legislation earlier this month and pushed the bill through the state Legislature in under three weeks.

Wolf had made his intentions known early on that he would veto the legislation.

Republicans on Wednesday slammed Wolf's decision to veto the bill and vowed to continue pursuing efforts to "strengthen" and reform the state's election system. They accused Wolf of refusing to engage with them in negotiation and developing the bill, arguing that the legislation would be the "best deal" the governor would get.

"To say I am disappointed in Wolf's lack of action is an understatement," state GOP Rep. Seth Grove, the bill's author, said in a statement Wednesday. "Though Wolf has put on blinders to problems within our election process, it doesn't mean the problems do not exist."

Grove, who chairs the House State Government Committee, said his quest to add new voter ID restrictions was far from over and that the committee would take up Senate Bill 735, which would amend the Pennsylvania constitution to require voters to provide ID to vote. He argued that the constitutional amendment "will take election reform directly to the people" and "bypass Wolf."

Late last year, Grove was among the group of state Republicans who wrote to the Pennsylvania congressional delegation, urging them to object to Congress' certification of the state's Electoral College votes in January.

In an interview with a local paper in April, Grove said that the state did see small-scale election fraud in the 2020 election -- but that it was done by Republicans.