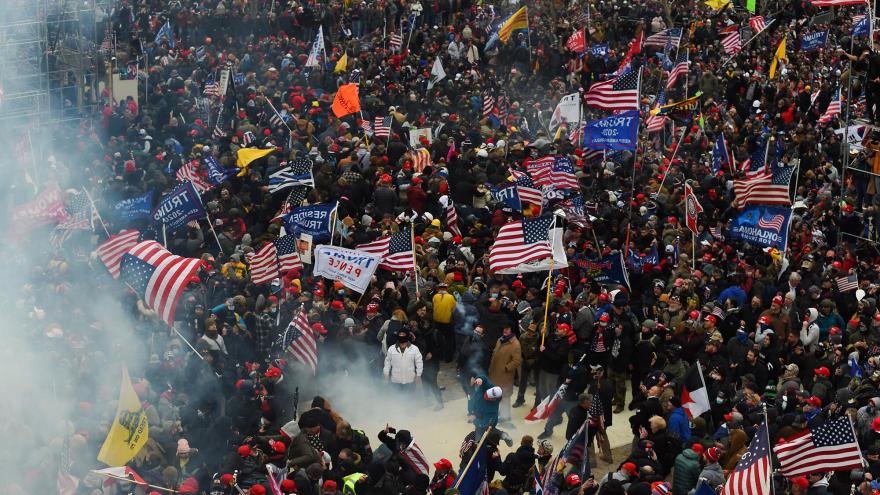 A Pennsylvania man accused of striking a Capitol cop with a fire extinguisher is charged. Seen here, Trump supporters clash with police and security forces as they storm the Capitol in Washington, DC, on January 6.

(CNN) -- A Pennsylvania man whom authorities say threw a fire extinguisher and struck a Capitol Police officer during the deadly riot at the US Capitol last week has been arrested and charged in federal court.

Robert Sanford, 55, was arrested on Thursday morning in Pennsylvania, the Justice Department said. Court documents say Sanford was seen on video carrying a "red object, which appears to be a fire extinguisher," as he stepped over a short wall at the lower west terrace of the Capitol. He allegedly threw the fire extinguisher toward police officers, striking one, who was wearing a helmet, before ricocheting and hitting two others.

Officer William Young said he "felt a hard strike to the back of his helmet," according to the court documents, and saw a fire extinguisher on the ground but didn't see who struck him. Young was evaluated at the hospital and cleared to return to duty.

The records said Sanford was identified on Tuesday to the FBI's Pennsylvania branch and charged on Wednesday in US District Court.

He faces four counts: knowingly entering or remaining in any restricted building or grounds without lawful authority; disorderly or disruptive conduct on Capitol grounds; civil disorder; and assaulting, resisting, or impeding certain officers while engaged in the performance of official duties, the documents say.

It was not immediately clear if he has an attorney.

His arrest adds to a growing list of individuals charged in last week's deadly riot, which left five people dead, including a Capitol Police officer and a woman who was participating in the attack.

So far, more than 30 people have been arrested on federal charges, with some of the defendants being accused of bringing weapons to Capitol Hill and others having been photographed ransacking the building. Many are charged with unlawful entry or violent entry.

Among those arrested this week alone are Robert Keith Packer of Virginia, who has been identified as a man who was inside the Capitol wearing a sweatshirt emblazoned with the phrase "Camp Auschwitz," and Larry Rendell Brock, a retired Air Force Reserve officer from Texas who was photographed roaming the Senate chamber clutching a white flex cuff, which is used by law enforcement to restrain or detain subjects.