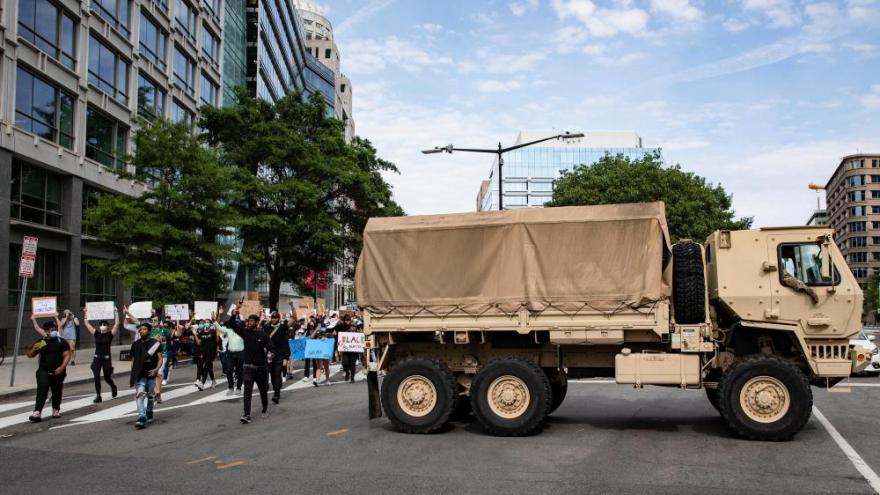 In this June 2, 2020, file photo, protesters pass DC National Guard troops as they march through Washington during demonstrations over the death of George Floyd.

(CNN) -- Acting Defense Secretary Christopher Miller on Monday approved a request from the mayor of Washington to deploy DC National Guard forces to the city to support local authorities during pro-Trump demonstrations scheduled in the city this week, a defense official told CNN.

Mayor Muriel Bowser made the request Thursday in a letter addressed to Maj. Gen. William J. Walker, the commanding general of the DC National Guard, in which she referenced protests in the city in November and December that "resulted in a large influx of participants, violence and criminal activity."

"No DCNG personnel shall be armed during this mission, and at no time, will DCNG personnel or assets be engaged in domestic surveillance, searches, or seizures of US persons," Bowser, a Democrat, wrote in the letter.

DC Police Chief Robert Contee told reporters on Monday that the National Guard will assist with "crowd management" and traffic control, freeing the city's police officers to focus on potential acts of violence and other security issues.

This week's planned protests will occur as two significant political events take place: Tuesday's US Senate runoff elections in Georgia, which will determine the balance of power in the chamber, and Wednesday's congressional meeting to certify President-elect Joe Biden's victory over President Donald Trump.

Speaking during a news conference on Monday, Bowser asked protesters to refrain from violence, regardless of their political views, and again urged residents to avoid the downtown area this week, as well as "people who are coming here to look for confrontations." The mayor also said that a potential curfew for the city was not off the table, saying it will be "a tool that we will evaluate during the week."

DC's attorney general, Karl Racine said, in a statement Monday that while DC respects freedom of speech and the right to protest, "the Constitution does not grant the right to commit violence or vandalize property, and there is certainly no right to engage in acts of hate."

Racine added, "While we respect their right to protest, we will not tolerate criminal behavior -- and we should deny them the opportunity to cause chaos."

Bowser's office told CNN that the plan includes the activation of 340 guardsmen, while the total deployment at any given time will be 114. The defense official said the personnel will be deployed to a few dozen points on the streets, accompanied by a DC police officer at each one. Guardsmen will also be deployed to Metro subway stations in the city alongside local officers. Their focus will primarily be on the Metro and traffic, a spokesperson for Bowser said.

A chemical-biological response team will be on standby if needed, the defense official said, which is a standard practice for any large event. Finally, some guardsmen will be activated but on standby should civilian law enforcement be pulled away to respond to a situation.

At this point, guardsmen will not be conducting direct law enforcement missions, the official said.

The request from Bowser is notable given the city's recent history with unruly protests and law enforcement. Last summer, amid unrest sparked by the death of George Floyd, the Pentagon moved about 1,600 active-duty troops to the Washington area after Democratic governors in Virginia, New York, Pennsylvania and Delaware turned down requests from then-Defense Secretary Mark Esper to offer National Guard troops to help with security in Washington.

Bowser said at the time that her office did not request any assistance from other states.

Demonstrations in Washington late last year saw a number of skirmishes between anti-Trump protesters and supporters of the President, with at least 20 people arrested during a demonstration in mid-November in which two officers with the DC Metropolitan Police were injured.

During a pro-Trump rally in December, Black Lives Matter signs at two historic Black churches in DC were torn down and set on fire. Contee said on Monday that local police will be "increasing our visibility" around churches in the area this week.

The police chief also said he is not sure whether Trump will be in the streets with protesters this week. On Sunday, the President shared a message on Twitter about a demonstration planned for Wednesday outside the White House, saying, "I will be there."

This story has been updated with a statement from DC Attorney General Karl Racine.