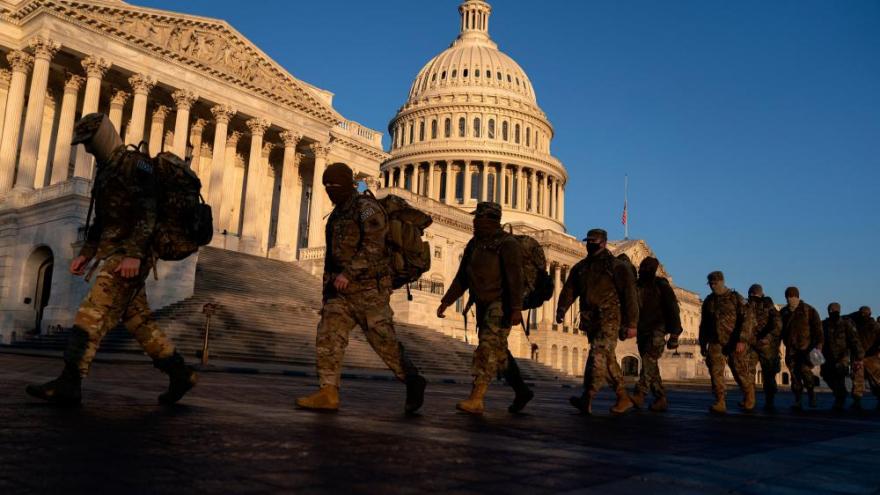 (CNN) -- National Guard members supporting US Capitol security in Washington, DC, ahead of Inauguration Day will be armed, the Department of Defense announced Tuesday.

The decision comes as law enforcement in the nation's capital and around the country brace for more extremist violence after the deadly insurrection at the US Capitol last week. The first wave of National Guard troops who arrived at the Capitol were unarmed, and the Army has been reviewing whether National Guardsmen should be armed for the inauguration with lethal or nonlethal weapons.

Capt. Chelsi Johnson, spokesperson for the DC National Guard, said in a statement to CNN that the move was requested by federal authorities and authorized by Secretary of the Army Ryan McCarthy.

"National Guard members are postured to meet the requirements of the supported civil authorities, up to and including protective equipment and being armed if necessary," Johnson said.

The New York Times first reported the Pentagon's decision to arm National Guard troops deploying to Washington for security ahead of the inauguration.

The US Army is working with the Secret Service to determine if there are soldiers who will be part of the National Guard contingent providing security at Biden's inauguration who require additional background screening, CNN previously reported.

The DC National Guard is also providing additional training to service members as they arrive in Washington to stress that if they see or hear something that is not appropriate, they should report it to their chain of command, an Army spokesperson said in a written statement to CNN.

"There is no place for extremism in the military and we will investigate each report individually and take appropriate action," the spokesperson said.

"The Army is committed to working closely with the F.B.I. as they identify people who participated in the violent attack on the Capitol to determine if the individuals have any connection to the Army," the statement said while adding that any type of activity that "involves violence, civil disobedience, or a breach of peace," may be punishable under the Uniform Code of Military Justice or under state and federal law.