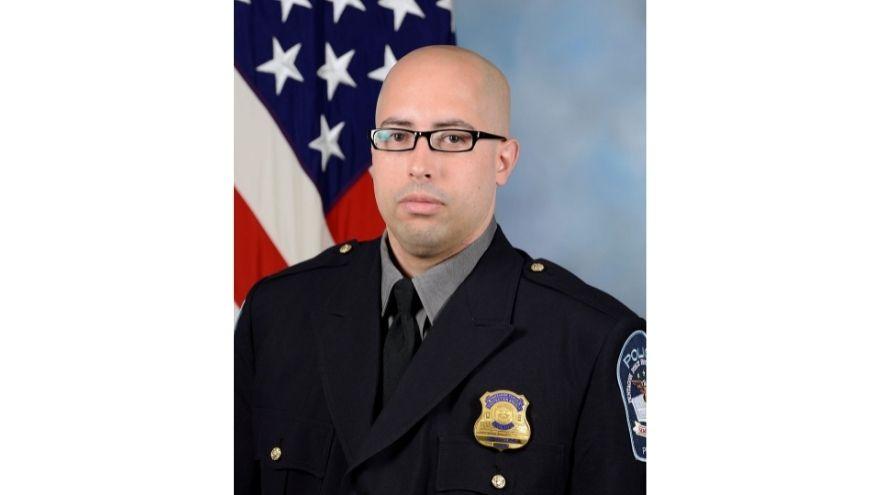 (CNN) -- Pentagon police officer George Gonzalez died Tuesday after sustaining injuries during a violent incident outside of the Pentagon building, according to a release from the Pentagon Force Protection Agency.

The FBI has been investigating the incident and in a series of tweets Wednesday, its Washington field office offered some details.

On Tuesday around 10:40 a.m., "an individual who has now been identified as Austin William Lanz, 27, exited a bus at the Pentagon Transit Center in Arlington, VA, and immediately, without provocation, attacked" Gonzalez with a knife, "severely wounding him," the FBI Washington field office tweeted.

After Lanz stabbed Gonzalez, "a struggle ensued." Lanz "mortally wounded Officer Gonzalez and then shot himself with the officer's service weapon," the FBI said.

A civilian bystander was also injured during the incident. The civilian was taken to the hospital and later released with non-life threatening injuries, the FBI Washington field office said in the tweets.

Before joining the Pentagon Force Protection Agency, Gonzalez worked for the Federal Bureau of Prisons and the Transportation Security Administration. He also served in the US Army, earning a Commendation Medal for his service in Iraq, the release said.

"Officer Gonzalez embodied our values of integrity and service to others," the release said.

"A gregarious officer, he was well-liked and respected by his fellow officers," the release said. "Officer Gonzalez's family is in our thoughts and prayers. May he rest in peace."

The White House offered condolences to Gonzalez's family on Wednesday.

"I wanted to also take a moment to recognize the passing of Pentagon Force Protection Officer George Gonzalez, who was tragically killed yesterday in the line of duty. His life was one of service, a veteran of both the police and the military," White House press secretary Jen Psaki said at the daily press briefing.

"He lost his life protecting those who protect the nation. We mourn his loss and offer condolences to his family," Psaki added.

The "shooting event" occurred on the bus platform on the Pentagon complex and prompted a lockdown of the building with no personnel allowed outside, according to a message that was sent to the Pentagon workforce by the Pentagon Force Protection Agency.

The Metro Bus platform is a major entrance to the Pentagon used by thousands of personnel every day entering and leaving the building and is used by multiple bus lines in the area.

"Trains are bypassing Pentagon due to an on-going police investigation outside the station. Shuttle bus service is available," a tweet from the WMATA Metrorail account said Wednesday morning.