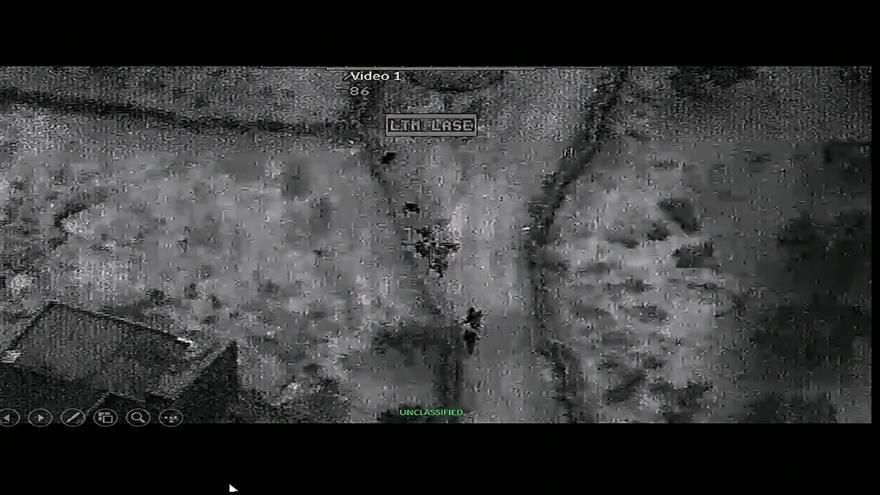 Video from an overhead drone also shows the commandos approaching Baghdadi\'s compound and aerial strikes carried out by US F-15 fighter jets and MQ-9 Reaper Drones to blow up the site once it was cleared. Source: Pool
By Zachary Cohen, Barbara Starr and Ryan Browne, CNN

Video from an overhead drone also shows the commandos approaching Baghdadi's compound and aerial strikes carried out by US F-15 fighter jets and MQ-9 Reaper Drones to blow up the site once it was cleared.

The commander of US Central Command, Gen. Frank McKenzie, said the DNA used to confirm Baghdadi's identity was from samples collected during his previous detention at Camp Bucca in Iraq.

McKenzie told reporters that he could not confirm that Baghdadi was "whimpering and crying" in his final moments as President Donald Trump claimed in his televised address on Sunday.

However, McKenzie added the terror leader "crawled into a hole with two small children and blew himself up while his people stayed on the ground. So you can deduce what type of person that is based on that activity."

McKenzie also revealed that Baghdadi may have shot at US forces from the hole.

While Trump and other military officials initially believed Baghdadi had killed three children after detonating his suicide vest in a tunnel, McKenzie said updated information had revealed that only two children had been with him, with both of them being assessed to be under 12 years old.

He did reveal that special operations forces that carried out the raid were pre-staged in Syria, news that comes after Trump ordered most US troops to be removed from the country.

McKenzie said the US forces withdrawal from Syria was not a "limiting factor" in the raid, and that it had nothing to do with the timing, which was determined "given the totality of the intelligence ... and the other factors that would affect the raid force going in and coming out."

Kurds 'were part of it'

McKenzie said the Kurdish-led Syrian Democratic Forces provided "early intelligence" that "was very helpful to us," adding "So I would say that they were part of it" while making it clear that only US personnel were involved in the raid itself.

He said that the US had "fleeting and actionable" intelligence on the ISIS leader's hideout prior to launching the operation.

Video was also provided showing US helicopters conducting strikes against enemy fighters that had fired on the US aircraft as they approached the target. McKenzie said that those airstrikes killed some 10 to 15 enemy fighters but those forces are not necessarily believed to have been affiliated with Baghdadi and were possibly members of one of the many armed militant groups that occupy the area around the compound and would be hostile to the presence of US or other international forces, underscoring the risks involved in conducting a raid in that part of Syria.

US aircraft also targeted at least one enemy vehicle that was approaching the site and was perceived to be a threat.

McKenzie said that the US team was able to recover documents and electronics at the site before the compound was destroyed in an airstrike as part of an effort to prevent it from becoming a shrine for extremists. He added that the recovered documents and electronics will be exploited in the hopes of providing intelligence that could aid future operations against ISIS.

Minutes after the Pentagon briefing, Trump began his remarks at the Medal of Honor ceremony for Army Master Sgt. Matthew Williams by thanking Secretary of Defense Mark Esper for the raid that led to the death of Baghdadi.

'He was hit hard'

"Thank you Mark, and a great job to you and everybody and to General Milley for the incredible act you performed days ago with al-Baghdadi," the President said.

"He was hit hard," the President said of Baghdadi, "the way he should have been."

"I just want to say for all of our military we are very proud of you. It was something very special. The whole world is proud of you frankly. So thank you very much. Thank you. Great job," he added.

Baghdadi's death marked the end of a years-long hunt to find one of the most wanted terrorists in the world and the man who declared a so-called Islamic caliphate in Iraq and Syria in 2014.

It was the most significant announcement of the death of a terror leader since President Barack Obama revealed al-Qaeda leader Osama bin Laden had been killed by US Navy SEALS in a dramatic late night address in May 2011.

"This is a devastating blow. This is not just their leader, it's their founder. He was an inspirational leader in many ways. He formed ISIS in 2014, he led to establishing the physical caliphate throughout the region, so this is a major blow to them," Esper told Jake Tapper Sunday on CNN's "State of the Union."

Trump's announcement on Sunday morning was remarkable in its own right. He teased the news on Twitter the night before, saying "something very big just happened!"

And in a contrast with Obama's sober address to the nation about bin Laden, Trump's freewheeling appearance before the cameras was filled with descriptions of gruesome imagery -- "his body was mutilated by the blast" -- and he openly mocked the terror leader as a coward.