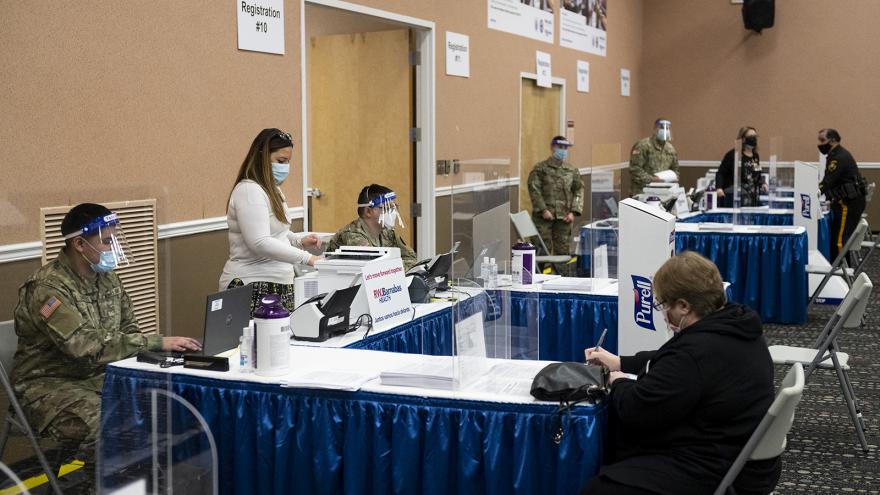 (CNN) -- The Department of Defense is weighing options to assist President Joe Biden's plan to vaccinate as many as 1.5 million people per day within months. Discussions are taking place about deploying thousands of US troops to help with the vaccination efforts, according to four officials familiar with the talks who said a plan could be unveiled by the end of the week.

The discussions are at an early stage and no decisions have been made yet, the officials cautioned. One official, when pressed for an estimate, said that as many as 10,000 troops could be deployed as part of the effort.

Such a deployment could start with medical units that have been on standby orders for some time and have deployed in recent months to some of the hardest hit areas, one official said. The clock is already ticking on Biden's first 100 days in office with the goal of delivering 100 million vaccine shots within that timeframe.

"It's all about how we can get better involved in the vaccinations," another official told CNN. "Planning efforts are ongoing, but there are no decisions."

It's unclear at this point if the plan would involve the use of active-duty troops, National Guardsmen, or some combination. Any plan will require that an approved request be sent from the Federal Emergency Management Agency (FEMA) to the Department of Defense, a process that takes time.

"I think with the grace of God, the goodwill of the neighbor, and the creek not rising, as the old saying goes, I think we may be able to get that to 1.5 million a day, rather than 1 million a day," Biden said on Monday. "But we have to meet that goal of 1 million a day, and everything points that we're going to have a) enough vaccine, b) enough syringes, and all the paraphernalia needed to store, keep, [and] inject into your arm the vaccine."

Biden also stressed the important of needing more people to administer the vaccine.

"We stand ready to assist in any way that we can to make sure that we can really help as much as possible. And that's related not only to the state plans but also related to Operation Warp Speed," said Hokanson.

CNN previously reported that 25,000 National Guard troops had been deployed to Washington to provide security for Biden's inauguration and over 5,000 will stay in the city through March.

In his first message to the military, Secretary of Defense Lloyd Austin stressed that his top priority was the battle against coronavirus.

"Doing my job means helping our country get control of the pandemic, which has killed more than 400,000 Americans. You have already come to the aid of our Nation's health care professionals. You can expect that mission to continue. But we must help the Federal Government move further and faster to eradicate the devastating effects of the coronavirus," he wrote on Friday, the day he was confirmed as defense secretary.

Last week, Biden described the fight against the pandemic as a "wartime effort" and vowed to use the Defense Production Act to direct all federal agencies and private industries to produce everything needed to protect Americans from the virus.

"Our national plan launches a full-scale wartime effort to address the supply shortages by ramping up production and protective equipment, syringes, needles, you name it," Biden said. "And when I say wartime, people kind of look at me like 'wartime?' Well, as I said last night, 400,000 Americans have died. That's more than have died in all of World War II. 400,000. This is a wartime undertaking."