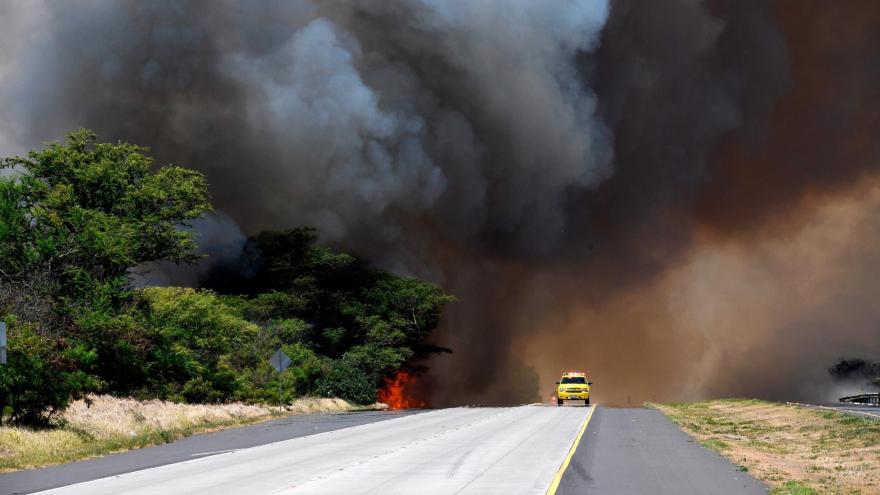 A raging blaze led to evacuations of people and animals in parts of Maui as firefighters battled to keep it away from residential areas, Hawaii officials said. Source: Matthew Thayer/The News/AP
By Faith Karimi and Joe Sutton, CNN

(CNN) -- A raging blaze led to evacuation of more than 600 people in parts of Maui as firefighters battled to keep it away from residential areas, Hawaii officials said.

The fire had scorched 3,000 acres on central Maui, leading to evacuations of residents of Kihei and Maalaea as it burned out of control Thursday, the mayor's office said. The Maui Humane Society moved its animals in crates and kennels to a nearby high school.

"This fire is still an active threat to our community and residents are urged to remain vigilant of changing conditions," County of Maui Mayor Michael Victorino said.

As darkness set in, the mayor said firefighters would not bring it under control overnight.

"We can't fight the fire tonight. We're not going to send any firefighters into harm's way," Victorino said Thursday.

County of Maui activated its Emergency Operations Center to respond to the fire Thursday morning. By afternoon, the flames were burning out of control and emergency officials sent a mobile alert warning nearby residents to evacuate.

Oprah has a home in the county, and tweeted a local resident to confirm that she's given officials fighting the fire access to her private road. "A big mahalo to Oprah for giving Maui County access to your private road for use to assist in the Maui fire," Hawaii Gov. David Ige tweeted.

Flights at Kahului Airport were briefly diverted, but operations have returned to normal. The fire affected access to the airport, which was operating on emergency generators. The Hawaii Tourism Authority advised visitors heading to or from the airport to contact their airlines for flight status due to power issues.