People are back in Dayton's Oregon District after the deadly shooting 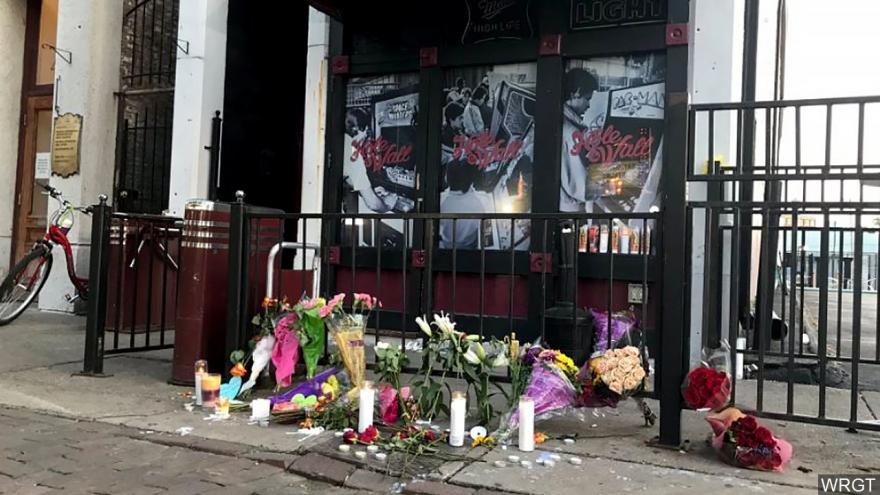 (CNN) -- All day long on Monday a steady stream of pedestrians could be seen down the stretch of East 5th Street in Dayton, Ohio, near where a gunman opened fire on revelers enjoying a night out early Sunday.

As families prepare to bury their loved ones and other victims recover from their injuries, parts of the Oregon District have returned to business after the deadly attack left nine people dead and 31 injured.

Among the places to reopen Monday was Ned Peppers bar, one of the places the gunman targeted, CNN affiliate WKEF said.

Across the street from the bar, the gift store Heart Mercantile displayed a blackboard with the handwritten names of those killed on it.

Elsewhere, there were memorials, tributes and calls for action written in colored chalkalong the sidewalk. One message featured a line through the phrase "thoughts + prayers" and the words "change + policy" underneath it.

The Oregon District is open for business

"The Oregon District is open," Mayor Nan Whaley said at a news conference. Whaley said some businesses opened their doors Monday, a day they are normally closed, to try to recover from the shooting.

"One of my customers actually stepped out and was preforming CPR, so it was not a good moment," Guy Fragmin, who owns the 416 Diner, told WKEF. "Not a good moment at all."

But Fragmin's diner was open on Monday.

"The strength of Dayton coming together after that and everyone coming down today, we are open today," he said.

Annette Gibson ventured to the Oregon District after she saw on the news that Ned Peppers was reopening.

She told CNN she rushed downtown to relocate part of the pile of candles and flowers away from the entrance to ensure the memorial could remain even after patrons went inside.

"This memorial shouldn't be moved," she told CNN. "They're not even in the ground yet," she added referring to the victims.

Gibson said she was grateful the bar was able to serve as a refuge for fleeing bystanders. She also praised the actions of police who quickly stopped the attack -- referring to the patrolmen as "angels."

The Dayton shooter has been identified as 24-year-old Connor Betts, according to local and federal law enforcement sources. Police are still trying to determine what motivated him to kill nine people.

Betts was killed by police officers on patrol nearby 30 seconds after he opened fire. The entire incident played out on the street.

"If he'd gone into the bar and made it in there, we would have seen probably dozens of other people killed," Ohio Gov. Mike DeWine told CNN affiiate WCPO.

Bar staff and bouncers are being hailed as heroes

Austin, the manager of Ned Peppers, told CNN that at least four staff members helped render first aid to victims in the immediate aftermath. The staff has several former military members, said Austin, who asked that his last name not be used.

A bouncer seen in surveillance video pulling people to safety suffered a shrapnel wound to his leg and is still being treated at Grand View Hospital, Austin said.

"When the shooter came around the corner and shot him, he slipped and fell and went to the ground," Austin said of the bouncer. "Prior to that, he was shoving people in, making sure that everybody was getting in and getting safe."

Austin says the team had to work quickly in the chaos following the shooting. "Not only were we the victims, we were the first responders as well."

The manager told CNN his staff performed life saving work and helped the injured as best they could.

"After the fact, I had a couple staff go out and two gentlemen performed CPR on the two ladies right outside," Austin recalled. "They performed CPR on them until they passed away. Once that happened, a couple more went down and were applying tourniquets out of towels and trying to stop bleeding."

Austin says reports that the shooter was denied entry are inaccurate, as a bouncer would usually remember the face of someone they didn't let in so that they wouldn't let them in if they tried again.

DeWine plans to discuss the Dayton shooting during a news conference at the statehouse Tuesday. A news release says the governor will address issues of gun violence and mental illness.

DeWine flew to Dayton following the tragedy and ordered flags be lowered to half staff to honor the victims.

"We are here tonight because we know that we cannot ease the pain of those families who have lost someone," DeWine said at the vigil Sunday night.

His speech was interrupted by people shouting "Do something!" at him.

As a US Senator, DeWine voted in favor of gun control measures that would regulate gun shows and require child safety locks. As governor, DeWine has said he's pursuing a "red flag" law that would allow a judge to remove guns temporarily from potentially dangerous people.

The suspect had a high-capacity rifle

Betts has been linked to a Twitter account that retweeted extreme left-wing and anti-police postings, as well as tweets supporting Antifa protestors.

Police are still trying to determine what Betts' motivation was but said at a press conference Sunday that it did not appear that he had racial or political motivation for the shooting.

In the hours leading up to the shooting, the account linked to Betts liked several tweets about the mass shooting in El Paso, Texas.

Although officers were able to stop Betts in less than a minute, his high-capacity rifle was able to do extensive damage in that short amount of time.

"It is fundamentally problematic," Biehl said. "To have that level of weaponry in a civilian environment, unregulated, is problematic."

The suspect's sister was among those killed

The suspect's sister, Megan Betts, 22, was among those killed in the rampage. Friends told CNN affiliate WCPO she was a "beacon of light in a dark room."

Betts arrived to the area in the same car as his sister and a companion, police have said.

The others victims who lost their lives in the shooting range in age from 22-57.

Lois Oglesby, 27, was also killed. She had just given birth to her second child last month, according to the Washington Post.

"She was a nurse's aide and a very devoted mother," her uncle Joe Oglesby told the Post.

Sinclair Community College said in a statement that Oglesby and another victim, Logan Turner, 30, once attended the school

Thomas McNichols, 25, a father of four described as a gentle giant, was also killed in the shooting. "I will tell his kids that they had an amazing dad," said his aunt, Donna Johnson. "We're just always going to honor his memory with love."

Beatrice N. Warren-Curtis, 36, and Monica E. Brickhouse, 39, were out together when they were gunned down.

Derrick Fudge, 57, was out to have a fun night with family when he was fatally shot after stepping outside of a club to get some food, his family said.

Saeed Saleh, 38, was identified by police as another of the fatal victims.