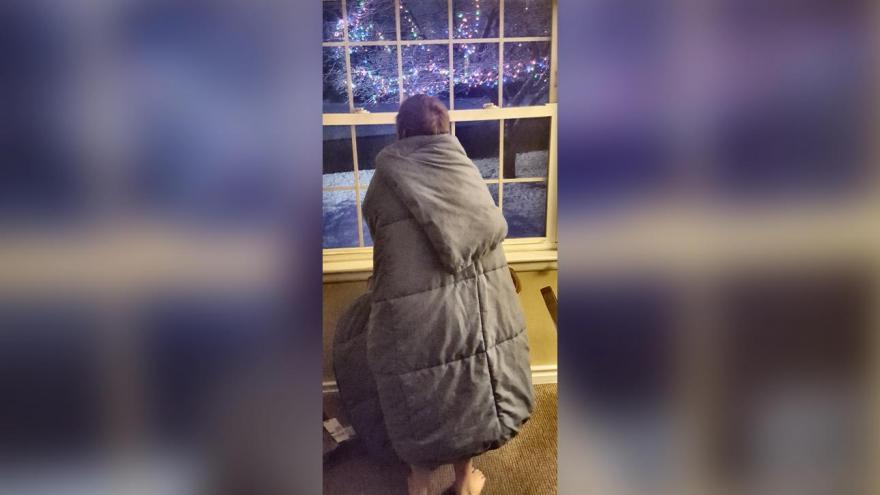 Mike and Holly Griffin's son looks out their window at the Christmas lights now up in their yard.

(CNN) -- As coronavirus has infected every state in the nation and people are stuck inside their homes in an attempt to prevent it from spreading even more, things are feeling a little bleak.

So some are trying to spread a little hope and cheer instead.

People around the country are putting up their Christmas lights and encouraging others to do the same.

The idea is that twinkling, colorful lights will lift spirits during these dark times. And it doubles as a social distancing activity: people can admire the lights from the safety of their own homes or cars.

Over the weekend, Lane Grindle, a broadcaster for the Milwaukee Brewers, posted a callout on Twitter.

"What if we all put our Christmas lights back up? Then we could get in the car and drive around and look at them. That seems like a fair social distancing activity," he wrote.

Dozens responded with enthusiasm, with a couple even posting photos of the lights on in their front yard.

In Cumberland, Rhode Island, a 10-year-old boy had a similar idea.

"Hey dad, can we turn the Christmas lights on?" Holly Griffin says her son asked her husband. "I want something to look at."

The family put up their lights and decided that they'd keep them on until social distancing protocols were no longer in place.

Griffin and her husband both encouraged others to do the same on social media. Since then, they've received messages from people all around the country.

Someone in Louisiana replied to Mike Griffin's tweet saying that she put her Christmas lights up at 1 a.m. after reading about it, and shared it with others in her community too.

Even someone in the United Kingdom from people messaged them, excited about the idea.

"Times are dark and there's light to be spread," Griffin told CNN. "Now more than ever is a time to be looking outside yourself. I think taking our mental health seriously is really important and just hearing bad news all the time can really make that multiply."

The lights are a small gesture, Griffin says, but she said she hopes that when first responders, grocery store workers and pharmacists drive by that it might bring a smile to their face.

"It's the little things we can do to feel connected," she said.