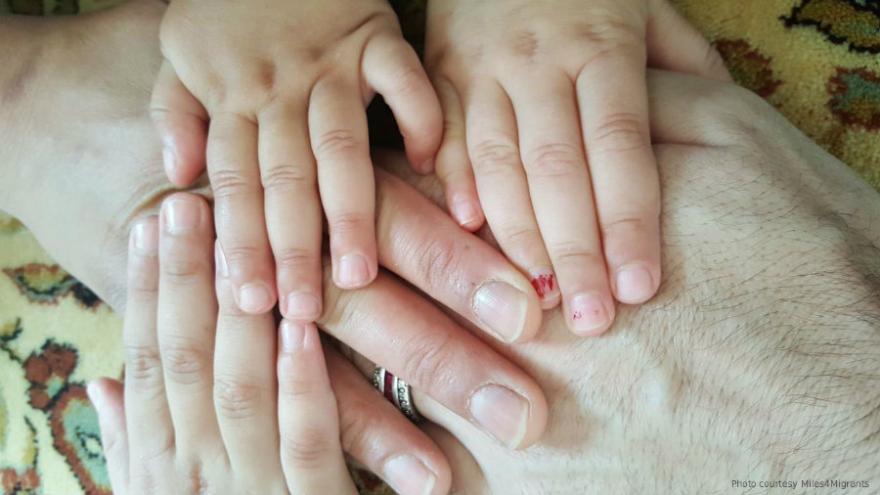 (CNN) -- Did you know you can donate your frequent flyer miles to help reunite families who were separated at the US-Mexico border?

After a viral tweet this week from a woman who donated her miles, people have now donated more than 7.3 million frequent flyer miles to a non-profit organization whose main focus is reuniting families separated by political conflicts around the world.

"My husband travels a lot. Downside: he's gone a lot. Upside: frequent flyer miles. We just used some to fly a 3-yr-old and his dad, who had been separated at the border, from Michigan (where the son had been taken) to their extended family," University of Michigan professor Beth Wilensky tweeted.

The US government has separated more than 2,500 children from parents at the border since implementing its "zero tolerance" policy, and 559 of those children remain in custody, the Department of Homeland Security confirmed last week.

People have been stepping in to help separated families, and Wilensky's tweet highlighted another way to contribute.

Wilensky's tweet received more than 139,000 likes, 31,000 retweets and hundreds of replies, with many asking, "How do I do this?" Wilensky followed with an answer: Miles4Migrants and a grassroots organization called Michigan Support Circle.

The concept of donating frequent flyer miles for a cause is not new.

Airlines across the United Stattes have partnered with the American Red Cross to help those affected by natural disasters, and with the Make-A-Wish Foundation to help grant wishes of children diagnosed with a critical illness.

When it comes to the separation of families, US airlines have been very vocal. In June, American, United and Frontier asked the federal government not to use their planes to transport migrant children after they're taken from their parents.

Miles4Migrants is working to obtain the airlines' help, with assistance from various grassroots organizations, to use the donated miles.

"We have yet to support a US immigrant family separation case but we are actively working with a few US-based organizations and moving a million miles an hour to put our new miles donations to use in helping to reunite families that remain separated," Miles4Migrants co-founder Andy Freedman told CNN.

Before Wilensky's tweet went viral, the two-year-old American organization had booked flights for more than 150 people, and its main focus was reuniting families displaced by war and persecution from Syria and Afghanistan. The group had received a total of 3.1 million miles.

But 48 hours after Wilensky's tweet, Miles4Migrants had received 4.5 million miles, and by Friday it was approaching the 8-million mark.

"With domestic flights averaging about 20,000 miles per ticket, Miles4Migrants expects to fly over 300 people and reunite them with their families," co-founder Seth Stanton said.

Wilensky said she first learned about the 3-year-old and his father through Michigan Support Circle, whose mission is to help those affected by the family separation policies.

MSC shared the boy's story on a community page, and Wilensky told CNN she responded by offering miles to book a flight to get the child's father to Michigan, where the government had placed him.

"We knew there were 53 kids being fostered in Michigan, so it was our job to reunite those kids with their families," Rosalie Lochner head of MSC told CNN.

MSC also asks for mile donations, however the grassroots asks those donors to book the flights themselves because they're not partnered with an airline or corporation who can make this process easier.

A process that Miles4Migrants is looking into adopting, and enhancing, by partnering with them, as this will be the first time the nonprofit has received such a big call out to help these families in the United States.

"Our classic case, until this week, has been like a Syrian refugee family that had been separated by the war. They request asylum, get a positive decision but can't afford a flight, so we step in," Stanton said. "And now that (the) separation of families is hitting home, we can take our expertise and apply it here."

In most cases the people don't have the funds to travel, and this is where the donated miles come into play -- but booking flights with miles also carries a fee, making cash donations just as important.

"If the result of this wave of donations and media/consumer interest is that airlines are willing to allow us to pool individual donations on the back end, it will be a huge win," Freedman said.