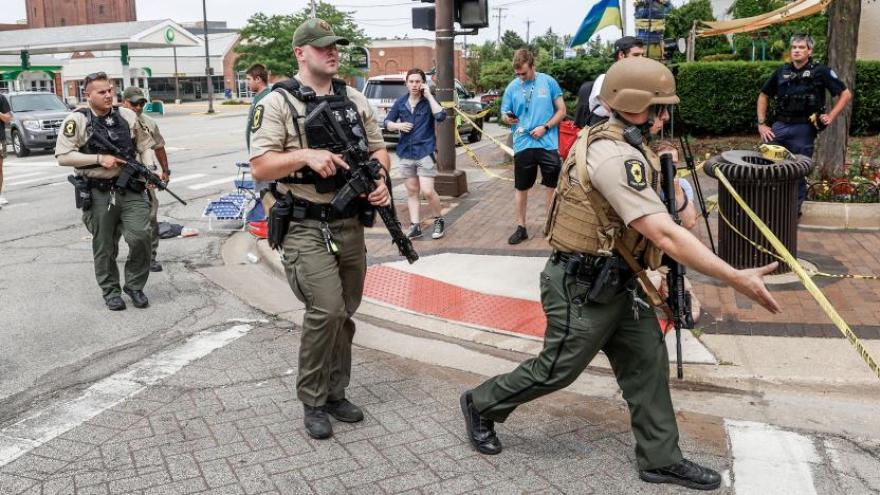 Law enforcement officers investigate the scene after the shooting on July 4.

(CNN) -- Zoe Pawelczak's dad thought the repetitive pops ringing out at Highland Park's Fourth of July parade Monday morning were part of the show, she says. But she felt something was off.

"I'm like, 'Dad, no ... something is wrong,' and I grabbed him" and ran, Pawelczak told CNN. People behind them started running, too.

"And I looked back ... and then it was just this sea of panic, and people just falling and falling," she recalled.

Pawelczak was one of the witnesses telling stories of sheer terror mere hours after the shooting in the Chicago suburb. Authorities say someone opened fire from a roof as the parade passed nearby, killing at least six people and wounding about two dozen others. Police said Monday night they had arrested a suspect, Robert E. Crimo III.

Pawelczak, who'd just moved back from Arizona, said she went to the parade to bond with her father, as she used to attended the event as a child. After a band passed she heard a long round of shots -- maybe 50 or more, she said.

She believes she saw at least one person shot dead, she told CNN, choking up. It was not immediately clear who that was.

After she grabbed her father, they hid behind a dumpster for about an hour, before police ushered them and others into a sporting goods store, she said. She and her father were OK, but others in the store were injured.

"One man had been shot in the head -- like, his ear. He was bleeding all over his face," Pawelczak told CNN. "There was another girl that got escorted out, (who) was shot in the leg."

Pawelczak and her father and waited in the basement until police escorted them out of the store.

Outside, the streets were "quite littered," Pawelczak said, and there was "blood everywhere."

"It looked like a battle zone," she said. "Gun violence is never OK -- we should never be numb to this."

Pawelczak later told CNN one man had hidden his children in the dumpster.

"A man actually went at one point to find his son and he asked me to watch his kids, so we were all hiding behind a dumpster together and the kids, really little kids were 'like what's going on?'" she said. "They ended up hiding in a dumpster there, the dad ended up putting his children in the dumpster to hide and stay safe. And it was probably 30 of us just hiding in this little corner behind the dumpster."

"The kid's dad is an amazing person and (I) can't believe it was his son," she said. "I'm very happy to know he's in custody. I can't imagine seeing what I saw today and having the person still on the streets."

'One bullet could pass through all our bodies'

Steve Tilken told CNN he sheltered in a store basement with his wife, her two grandchildren and dozens of others as police scoured the area for the gunman.

The Highland Park resident told CNN he initially thought someone was letting off a series of fireworks, but his wife's 13 year-old granddaughter had undergone active shooter training at school and "all of a sudden hit the ground sobbing." She also brought her brother to the ground, Tilken said.

"My wife just stood there -- was standing for like a second or two -- and then she realized what was going and so she dove down to protect their bodies with her body and I stood for another like couple of seconds in disbelief because I didn't see the carnage that was happening aback of me. And I threw my body on top of theirs," he said.

Tilken said they ran into the nearby store when he realized they were unprotected and in the line of fire.

"We were just sitting ducks right there and one bullet could pass through all of our bodies," he said.

Around 20 people were sheltering in different areas of the basement, including two women who appeared to have minor injuries from bullet grazes, Tilken said.

"My wife's granddaughter, she was shaken but in the basement, she, you know, tapped into some inner resources and was trying to be helpful to people with young kids and helping keeping the kids entertained and actually helping the two woman that had some of the minor wounds," Tilken said.

He said he went out of the store at one stage to try to see what was happening and saw a body "in a pool of blood," about eight feet from where he was standing. "I realized ... it's just your random luck that I wasn't shot."

Police carrying assault weapons later entered the basement looking for the shooter, Tilken said, and then brought a doctor to assess those with injuries.

Warren Fried, who attended the parade with his wife and 7-year-old twins, said he watched police and an ambulance pass by him at the parade and afterward heard an array of gunshots. People began yelling, "shooter" and, "run," and he and his family fled toward their car for safety.

"People were hiding, kids were on the streets looking for their parents, just in a state of shock," he said.

Another attendee, Miles Zaremski, who has lived in the area for about 37 years, first thought the gunshots were backfire from a parade vehicle, or fireworks.

When it continued, he realized it was from a gun -- and he saw people rushing away.

"I saw blood on the sidewalk. I saw a bloodied body that looked deceased," Zaremski told CNN. "It was sickening. It was just chaotic."

Zaremski later said witnessing the scene "on the nation's birthday...with people supposedly enjoying themselves," had shaken him to the core.

"If it can happen on July 4 in a peaceful, law-abiding community like we have in Highland Park," he told CNN. "It can happen anyplace."

Debbie Glickman, 54, was dancing to music, she said, when "all of a sudden we saw people running away from the parade."

"People were thinking that maybe it was just a firecracker that had gone off bad, but people were running, and ... it just was absolute mass chaos," she said. "It was absolutely the most terrifying thing that's ever happened to me."

'I'm surprised it took this long'

Larry Bloom, a Highland Park resident of 15 years, told CNN he had cycled to the parade and was standing just to the right of a bandstand when he heard a "pop, pop, pop."

"Then it just opened-up. Just a rain of gunshots, just so quickly, for quite a while, at least it seemed," Bloom said. "Then everybody just got up, turned and ran and tried to get behind something."

It was early in the celebrations and there were a lot of people present, Bloom said: "Just imagine a full audience for a parade, it was that many people. It was hundreds of people just in that area -- just all running in the same direction," he said.

The shots felt like they were coming from across the street and aimed at the area of the crowd he was in, Bloom said, though it was hard to establish where the gunman was. "It was right on top of us," he said. "From a rooftop wouldn't be unimaginable."

When the gunshots stopped and it cleared out and the police moved in, most people left the area, Bloom said.

"Over the years, considering the temperature of this country and some of the demographics of our town here, every year I'm surprised -- and thankful -- that it hasn't happened yet. And after I got to a safe space and I was able to get a few seconds of breath, I really just thought, 'Yup, see, it finally happened here, this is ours.' It's disappointing, but I'm surprised it took this long, which sounds awful," Bloom said.

Jeff Leon, 57, told CNN the gunshots at the parade sounded like "firecrackers in a garbage can," and it wasn't until he saw police officers reacting that he knew anything had happened.

"It sounded like a string of firecrackers that were let off inside of a metal garbage bin... at first that's what I thought it was," he said, adding he didn't immediately react.

"The police started reacting and I saw some people falling," Leon said. That's when he said he and everyone around him left all their belongings and began to run.