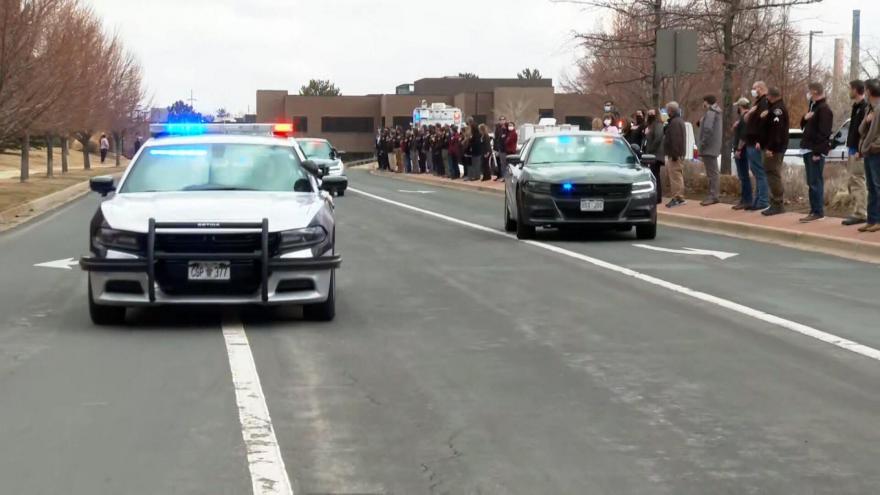 People line the streets of Boulder, Colorado, on Wednesday to honor Officer Eric Talley as his body is transported to the funeral home in Aurora.

Hundreds lined the streets as a hearse transferred his body from the coroner's office to a funeral home in Aurora. Many placed their hands over their hearts and some held American flags. Many public safety vehicles joined the procession.

Talley, 51, was one of 10 people killed when a gunman opened fire in a Boulder grocery store on Monday afternoon. He was the first Boulder officer to arrive at the King Soopers store and lost his life trying to save others.

Also on Wednesday, Talley's patrol vehicle was parked in front of the police station. It quickly became a shrine as mourners stopped by throughout the day to pile flowers, wreaths, cards and other tokens around and on top of it.

John Sullivan said he was thinking of Talley's wife and seven children.

"I'm wondering how his family will make it without him for the rest of their lives and I'm wishing them the strength to cope," Sullivan said.

Deborah Greene said she was thinking of Talley's family.

"How many more officers need to face down a madman with a gun?" Deborah Greene said. "These lawmakers, they don't do anything. I know it's the job of a police officer to run into danger, but shouldn't we make the world safer for them?"

Other vigils will be held Wednesday throughout Boulder. Law enforcement officers held a rolling vigil Monday night when Talley's body was moved from the grocery store.

Talley had been a member of the Boulder police force since 2010, Chief Maris Herold said. He was the first Boulder police officer to be killed in the line of duty since 1994.

Herold said Talley was "willing to die to protect others" and embodied "everything policing deserves and needs."