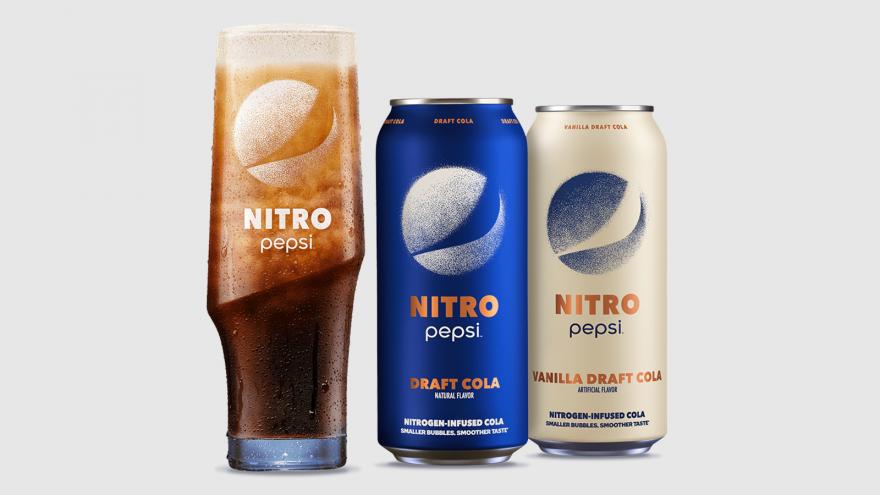 (CNN) -- Pepsi is putting a whole new meaning into the soft drink.

In what the company describes its "most ambitious feat yet," PepsiCo announced Wednesday a first-of-its-kind nitrogen-infused cola that has a creamier and smoother taste compared to traditional carbonated sodas. The beverage, called Nitro Pepsi, is being released in the United States on March 28 and comes in regular and vanilla flavors.

Nitrogen is more commonly used in beer and coffee drinks, like Starbucks' wildly successful cold brews, as nitrogen gas creates a silky, foamy texture. But since those come out of taps, Pepsi had to come up with a way to maintain the nitrogen in a can.

To solve that problem, Pepsi took a page from Guinness' playbook and added a so-called widget at the bottom that creates a "frothy, foamy, smooth texture unique to Nitro Pepsi." Guinness patented the widget about 50 years ago, and the nitrogen-filled capsule releases the gas when opened to create the stout's signature foamy head.

Pepsi's nitro cola also produces a foamy head when opening the can, so the company recommends a special way of drinking Nitro Pepsi: serving it without ice and not using the straw.

Nitro Pepsi, first announced in 2019, is aimed at attracting drinkers who don't like carbonated drinks.

"While soda has been a beverage of choice for so many consumers over the past century, some people still cite heavy carbonation as a barrier to enjoying an ice-cold cola," said Todd Kaplan, Pepsi's vice president of marketing, in a press release. He added that Nitro Pepsi is a "huge leap forward for the cola category and will redefine cola for years to come."

Nitro Pepsi is the latest entrant on the soda shelves as young people's interest in them have been on the decline. New campaigns and product extensions, such as alcohol, could be a way to get potential customers to pay more attention.