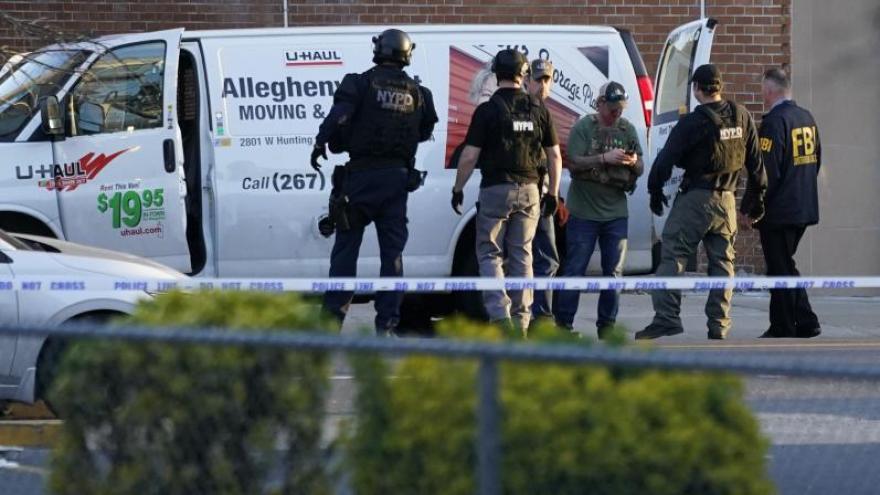 Emergency personnel, including the FBI, search a moving truck during an ongoing investigation in the Brooklyn borough of New York, Tuesday, April 12.

Frank James, who police initially described as a "person of interest," was declared a suspect Wednesday after investigators determined he purchased the gun recovered at the scene, law enforcement officials said. Two law enforcement officials told CNN that the gun evidence was the turning point in elevating him from a person of interest to a suspect.

James is suspected of setting off smoke grenades and firing a handgun 33 times on a crowded subway train making its way toward the 36th Street station in Brooklyn's Sunset Park neighborhood. The attack left 29 people injured, including 10 who were shot, though none of the injuries appear to be life-threatening, officials said. Five of the victims were young people commuting to school, New York Gov. Kathy Hochul said.

The motive of the shooting is not yet known. The attack is not being investigated as an act of terrorism but authorities have not ruled out anything, NYPD commissioner Keechant Sewell said.

The city issued an emergency alert to residents Wednesday saying James is "wanted" and asking the public for tips. The US Marshals Service joined the manhunt as well, a spokesperson told CNN.

"We're going to catch this person," Mayor Eric Adams said on CNN's "New Day" on Wednesday. "We're going to bring him to justice and hold him responsible for this horrific act on innocent people that are utilizing our subway system."

The subway shooting represents a long-feared nightmare scenario for New York City, which relies heavily on its mass transit system. Subway ridership cratered during the Covid pandemic as many workers stayed home, and ridership has not returned to its pre-pandemic levels, in part due to wariness over an increase in violence on the transit system.

How investigators honed in on James

A credit card that was used to rent the U-Haul was also found, two law enforcement sources told CNN. Two officials told CNN they believe the gun jammed during the shooting.

The U-Haul van was rented by James, police said, connecting him to the incident. The van was recovered near the station and has been cleared by the NYPD's bomb squad, police said.

Investigators did not find any other weapons or explosives in the van, two law enforcement officials said. The officials said it appeared James may have slept in the vehicle. They said a license plate reader detected the van driving over the Verrazzano Bridge from Staten Island into Brooklyn around 4 a.m. Tuesday.

Authorities also tracked the purchase of a gas mask to James through an eBay account, two officials said.

James has addresses in Wisconsin and in Philadelphia, where the U-Haul was rented, Essig said.

His family did not immediately respond to CNN's request for comment.

Within the 36th Street station, surveillance video may not be available. A preliminary review indicates there was some sort of malfunction with the camera system at the station, Adams told WCBS Radio.

"The result is that the NYPD has been able to comb through video from other stations and they have actually, as a result, identified three perspectives on the fellow who is wanted for this crime coming into the station," he said.

People aboard the train car on Tuesday morning said smoke filled the car and gunshots rang out, causing people to push their way to the other side of the train in panic and confusion.

Hourari Benkada, 27, who was shot in the back of the knee, said he thinks he was sitting next to the shooter.

Speaking from a hospital bed Tuesday, Benkada said he'd gotten into the last car of the N train and sat next to a man with a duffel bag who appeared to be wearing an MTA vest. The man let off a "smoke bomb," said Benkada, a housekeeping manager at the New Yorker Hotel.

"And all you see (is) smoke -- black smoke ... going off, and then people bum-rushing to the back," Benkada said. "This pregnant woman was in front of me. I was trying to help her. I didn't know there were shots at first. I just thought it was a black smoke bomb.

"She said, 'I'm pregnant with a baby.' I hugged her. And then the bum-rush continued. I got pushed, and that's when I got shot in the back of my knee."

The shooting started about 20 seconds after the train took off from the 59th Street station and felt like it lasted for nearly 2 minutes, Benkada said.Benkada heard other people in pain, but couldn't see them or the suspect because of the smoke, he said.

Claire Tunkel, 46, who was in the subway car where the shooting took place, described the scene as chaotic. She said she couldn't see anything because of the smoke, but she heard people crying out for help and others saying they were bleeding.

"You couldn't see anything, but you could feel it," she said. People were rushing to the front of the car, and some fell to the ground, she said. "You could feel the bodies."

She took off her jacket and tied it around the leg of a man who suffered a gunshot wound, she told CNN. Tunkel, who later went to the hospital for smoke inhalation, said several victims were lying on the floor of the subway platform after the train arrived at the station.

James, the suspect in the shooting, has been linked to multiple rambling videos posted on a YouTube channel. A screenshot from one of the videos was used on an NYPD Crimestoppers flyer seeking information about the shooting.

James talked about violence and mass shootings in the videos, including one uploaded Monday in which he said he's thought about killing people who have presumably hurt him.

"I've been through a lot of s**t, where I can say I wanted to kill people. I wanted to watch people die right in front of my f**king face immediately. But I thought about the fact that, hey man, I don't want to go to no f**king prison," he said.

In another video posted last week, James, who is Black, rants about abuse in churches and racism in the workplace, using misogynistic and racist language.

Many of the videos that James uploaded included references to violence, including at a set group of people he believed had maligned him, in addition to broad societal and racial groups that he appeared to hate.

In another video posted last month to the same channel, James said that he had post-traumatic stress. In that video, James said he left his home in Milwaukee on March 20. During the trip eastward, he said he was heading to the "danger zone."

"You know, it's triggering a lot of negative thoughts of course," he said in the video. "I do have a severe case of post-traumatic stress."

In a video posted in February, he also criticized a plan by the Adams administration to address safety and homelessness in the subway in part through an expanded presence of mental health professionals. In a racist and rambling recording, James called the new effort "doomed to fail" and described his own negative experience with city health workers during a "crisis of mental health back in the '90s, '80s and '70s."