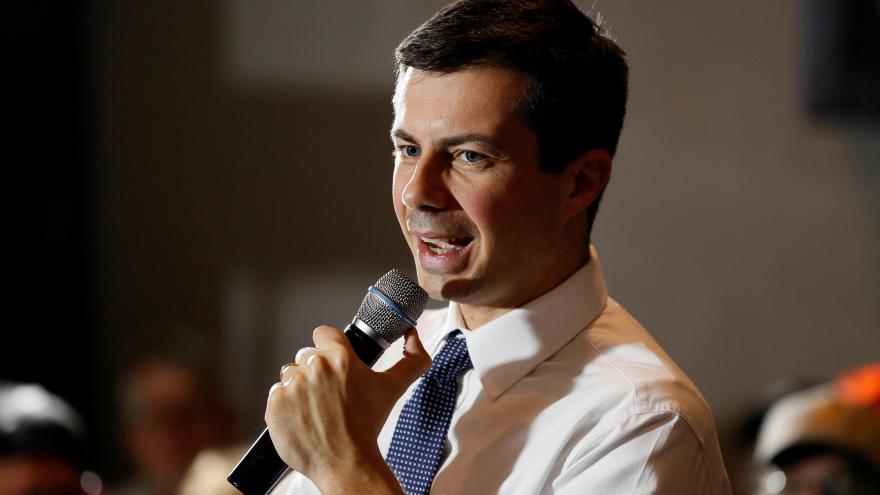 (CNN) -- Democratic presidential candidate Pete Buttigieg on Tuesday released the names of nine clients he worked with during his three years at the elite consulting firm McKinsey, shedding light on years of his career that he had come under pressure to make public in recent days.

Buttigieg's campaign said those clients were: Blue Cross Blue Shield of Michigan, the Canadian supermarket chain Loblaws, Best Buy, the Natural Resources Defense Council, the Environmental Protection Agency, the Department of Energy, the Energy Foundation, the US Postal Service, and the US Department of Defense.

The release comes after Buttigieg's Democratic presidential rival Massachusetts Sen. Elizabeth Warren and The New York Times Editorial Board called him to be more transparent about his work at McKinsey, which has faced renewed scrutiny after a report it helped US Immigration and Customs Enforcement implement President Donald Trump's immigration policy on the US-Mexico border.

Buttigieg initially declined to name his clients, citing a nondisclosure agreement with the consulting firm. Instead, Buttigieg provided a brief description of his clients without naming them.

On Monday, however, McKinsey said that the South Bend, Indiana, mayor could release the names of his clients.

Buttigieg went on to say that "voters can see for themselves that my work amounted to mostly research and analysis," but worried "about efforts to demonize and disqualify people who have worked in the private sector for the sake of political purity."

The mayor said on Tuesday that in 2007 he worked for Blue Cross Blue Shield of Michigan for three months. Buttigieg said he worked on "overhead expenditures such as rent, utilities, and company travel" and that the project did "not involve policies, premiums, or benefits."

Buttigieg later disclosed that he had two clients in 2008.

The first was Loblaws, a Canadian grocery and retail chain that the mayor worked for six months on analyzing "the effects of price cuts on various combinations of items across their hundreds of stores."

The second was Best Buy, where the mayor said he spent three months working on a "project to investigate opportunities for selling more energy-efficient home products in their stores."

After stepping away from McKinsey in the late summer of 2008 to work with a Democratic campaign for governor of Indiana, Buttigieg returned to McKinsey later that year, where he worked on a project aimed combating climate change through energy efficiency that was co-sponsored by the Environmental Protection Agency, the Department of Energy and the Natural Resources Defense Council. The project became a McKinsey report.

Buttigieg, for part of 2009, then worked for the Energy Foundation, an environmental non-profit in California where he worked on "a study to research opportunities in energy efficiency and renewable energy."

Buttigieg then said he worked in Washington for part of 2009 and 2010, where he worked with the Defense Department on a project that he said aimed at "increasing employment and entrepreneurship" in Iraq and Afghanistan and later with the United States Postal Service on "working to identify and analyze potential new sources of revenue."

Buttigieg then left McKinsey to run for state treasurer of Indiana, a race he would lose before successfully running to be the mayor of South Bend.

Buttigieg's opponents will now be combing through each of these clients, looking for politically problematic actions McKinsey could have proposed, like laying off workers or, when working for a health care provider, cutting back services.

The information provided by Buttigieg on Tuesday is likely the extent he is allowed to publicly share, though, given his nondisclosure agreement.

A McKinsey spokesman told CNN on Monday that while Buttigieg "may disclose the identity of the clients he served while at McKinsey from 2007 to 2010," he cannot "disclose confidential, proprietary or classified information obtained during the course of that work or violate any security clearance."

Buttigieg's Democratic opponents -- namely Warren -- have looked to use the mayor's time at McKinsey as a way to thwart his campaign. Warren, citing the need to understand possible "conflicts of interest," called on the mayor to describe his clients. She has also urged Buttigieg to open his fundraisers to reporters and list his top campaign fundraisers, two moves Buttigieg announced on Monday.

Buttigieg's campaign has responded by calling on Warren to release more of her tax returns, specifically those from when the candidate worked as a law professor and had private legal consulting clients. Warren has, so far, declined to do that, but has provided reporters with details on her corporate clients and released the amount of money she made from her corporate legal work.

Buttigieg has sought to distance himself from some of the more controversial work McKinsey has done, telling CNN last week, "As somebody who left the firm a decade ago, seeing what certain people in that firm have decided to do is extremely frustrating and extremely disappointing."