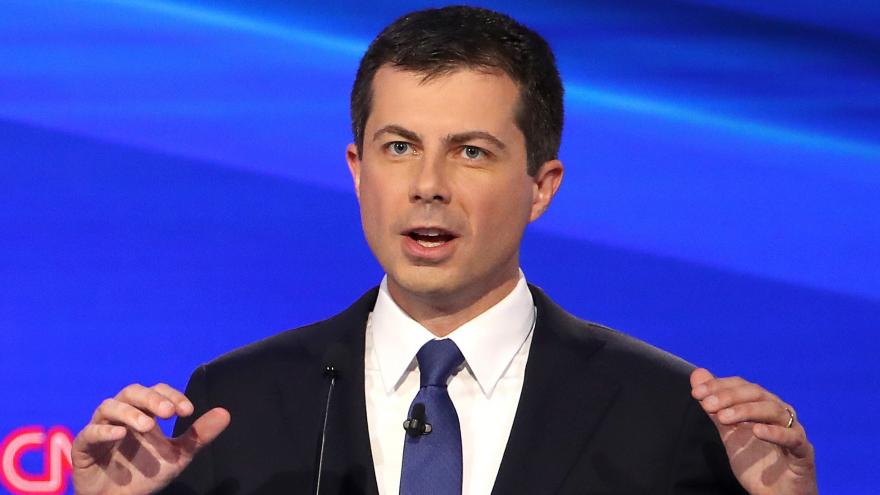 (CNN) -- Pete Buttigieg touted himself as the most electable Democrat in the 2020 presidential field on Friday, delivering an optimistic speech that cast himself as the person who can best person unify the country after President Donald Trump leaves office.

Beyond the words, though, the speech notably highlighted the newfound power for Buttigieg's growing organization in Iowa. As the South Bend, Indiana, mayor spoke on Friday night, hundreds of Buttigieg's supporters sporting yellow shirts emblazoned with "PETE" roared during lulls in the speech. Some had block lettering that read "Boot Edge Edge."

Here in Iowa, Buttigieg's campaign is ascendant, highlighted by a New York Times/Siena College poll released on Friday that found the South Bend mayor at 18% in the state. That places Buttigieg in the top tier with Massachusetts Sen. Elizabeth Warren, Vermont Sen. Bernie Sanders and Vice President Joe Biden, three Democrats he was looking up at earlier in this campaign.

That standing in the polls is significant for a candidate who had barely any staff on the ground for much of 2019, to the point that professional Democrats in the state privately questioned his commitment to the caucus.

Buttigieg has since poured millions into Iowa. His campaign in the state now stands at more than 100 staffers and over 20 organizing offices across Iowa.

But even as he uses his resources on winning the primary, on Friday, Buttigieg spent significantly more time focused on the President than his Democratic opponents at the Iowa Democratic Party's Liberty & Justice Celebration, choosing to use the powerful platform to highlight his lack of ties to Washington, D.C., his military experience and the need for Democrats to push a bright, forward-looking vision for the country.

"I am asking you to picture that first day the sun comes up in this country and Donald Trump is no longer the President of the United States. A happy thought for sure," Buttigieg said. "But what comes next?"

"This country cannot afford another four years of Donald Trump. We will not recognize it if he gets reelected."

Buttigieg also used the speech to take on questions about his candidacy. He rebutted issues around his age, telling Iowans that he is so optimistic not because of his youth, but because of his experience. And he directly highlighted his differences with other Democrats on issues like "Medicare for All," the liberal health care proposal that Buttigieg has questioned in recent months.

"If talking about hope and belonging sounds optimistic for a time like this, fine, then call it optimistic," he said, "but do not call it naive, because I believe in these things not based on my age but based on my experience."

Buttigieg said he had "seen in the dust of a war zone Americans who have nothing in common besides the flags on our shoulders learn to trust each other with our lives" and "seen in the ruins of factories, my city answer those who said we were a dying community by rising up together to build a better future."

And then Buttigieg got personal.

"After all you're looking at someone who as a young man growing up wondered if something deep inside of him meant that he would forever be an outsider, would never wear the uniform, never be accepted, never know love," Buttigieg said, a nod to him being gay. "And now you are looking at that same young man, a veteran, a mayor, happily married, asking for your vote for president of the United States."

Friday's event is often seen as a turning point in the race for the Democratic nomination, one that finds Iowa's Democrats beginning to solidify their support for one or two top candidates. In 2007, then-Sen. Barack Obama used what was previously known as the Jefferson-Jackson Dinner to show the organizing power behind his upstart campaign and firmly position himself among the top candidates in the Iowa caucuses, a contest he would eventually win.

That event highlighted Obama's ability to organize in the state, something that -- up until that point -- was unproven. Many in the Buttigieg campaign hoped, going into Friday's event, that the same would be true for Buttigieg.

Larry Grisolano, who was an Obama adviser in 2008, sent a fundraising email in the days leading up to the dinner with the subject line, "The parallels between 2007 and 2019."

"Pete's campaign this year is rekindling the same excitement I felt at this time in 2007," Grisolano wrote.

And Buttigieg leaned into that on Friday.

"The first time I came to this state was as a volunteer, to knock on doors for a presidential candidate with a funny name," he said, referencing his time as a volunteer for the 2008 Obama campaign. "And we knew the stakes were high then, the stakes are colossal now."

Comparisons to Obama give Buttigieg, a candidate who has never won a congressional or statewide office, significant shoes to fill. And not all of Buttigieg's advisers are looking to stoke such a resemblance.

"Every campaign is different, but what I will say is Pete's campaign has tremendous energy and enthusiasm that is propelling the campaign," said Jess O'Connell, Buttigieg's senior adviser who held a similar role to Obama's opponent, Hillary Clinton, in 2008. "Others have made the comparison that that is like Obama. I'm not ready to make that. We're running our own race."