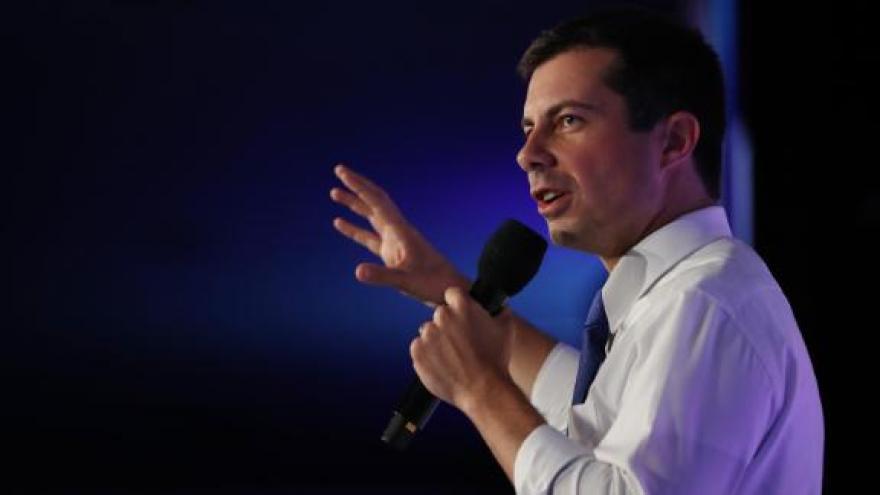 (CNN) -- Pete Buttigieg unveiled his criminal justice plan on Saturday, coinciding with a two-day swing through South Carolina -- a state where he has struggled to gain traction with African American voters -- and his participation in a presidential candidate criminal justice forum.

The South Bend, Indiana, mayor joins several other Democratic presidential contenders by proposing sweeping changes to the criminal justice system in an effort to roll back mass incarceration and address the system's disproportionate impact on black people.

Among the initiatives Buttigieg proposes is to reduce the incarcerated population by 50% at the federal and state levels, a proposal he introduced earlier this year; eliminating mandatory minimum sentences; legalizing marijuana, eliminating incarceration or drug possession offenses, reducing the sentences for other drug offenses; and pushing for changes to policing practices.

Buttigieg has faced criticism for rising violent crime in his home city as well as how its police department handled resident Eric Logan's killing by an officer.

That incident sparked national attention as well as days of protests, prompting Buttigieg to leave the campaign trail in June to return to South Bend to deal with the fallout.

He has also acknowledged his failure to increase diversity in South Bend's police force, saying at a June debate: "I couldn't get it done."

In his new plan, Buttigieg says he will "promote legislation that raises the legal standard under which officers are justified to use lethal force and offer incentives for states and localities to adopt more restrictive policies," as well as create a National Police Academy to promote best practices and national standards for police officers.

He also proposes a National Review Board that would, among other things, create a federal database on police use of force and officers who are fired.

The plan does not explicitly propose ending the cash bail system, as candidates like former Vice President Joe Biden, Sen. Elizabeth Warren of Massachusetts and Sen. Kamala Harris of California have. Instead, Buttigieg proposes limiting bail to what an individual is able to pay and rewarding states that are taking steps to eliminate the for-profit bail industry.

It aims to improve incarceration conditions by reducing the use and duration of solitary confinement, pushing to abolish the death penalty and providing health care for transgender and gender-nonconforming people and for women.

Buttigieg proposes eliminating the Medicaid exception for recently incarcerated people and restoring access to Pell grants for people who were incarcerated.

"I think often former incarcerated people trying to get back on their feet don't have the ear of policymakers, who are almost compelling them to wind up back in the criminal justice system because of all of the ways that you are being set up for failure on your way out," Buttigieg said earlier this month at a roundtable in Ames, Iowa. "Knowing that difference can make to somebody's ability to get back on their feet or literally their survival is one more reason why it's so counterproductive, in addition to being unjust and I think cruel to exclude people in this way."

In recent weeks, Buttigieg has sharpened his criticism of Warren, primarily over her support for "Medicare for All," as he pitches himself as a non-Biden moderate alternative to progressive candidates.

Buttigieg has gained traction in national polls and in early-voting states Iowa and New Hampshire, but in South Carolina, he has struggled. A recent Monmouth University poll found him registering just 1% support from black voters, who make up some 60% of the Democratic primary electorate in the state.

"I try not to get too caught up in the polling, but one thing I did notice in the South Carolina numbers is that with the majority of voters in the state, or the black voters in the state, said that they didn't have an opinion on me yet, and that means they've got a lot of opportunity, but also a lot of work," Buttigieg told reporters at a campaign stop in New Hampshire on Friday.

His presence in South Carolina is markedly smaller than in Iowa and New Hampshire -- this swing marks his sixth trip to the Palmetto State, while he's traveled to Iowa 17 times and New Hampshire 11 times since declaring his candidacy. In Iowa, the Buttigieg campaign boasts 22 field offices and more than 100 paid staffers, while New Hampshire has nearly 70 staffers and 13 offices. By contrast, the South Carolina campaign has four offices and 32 staffers on the ground.