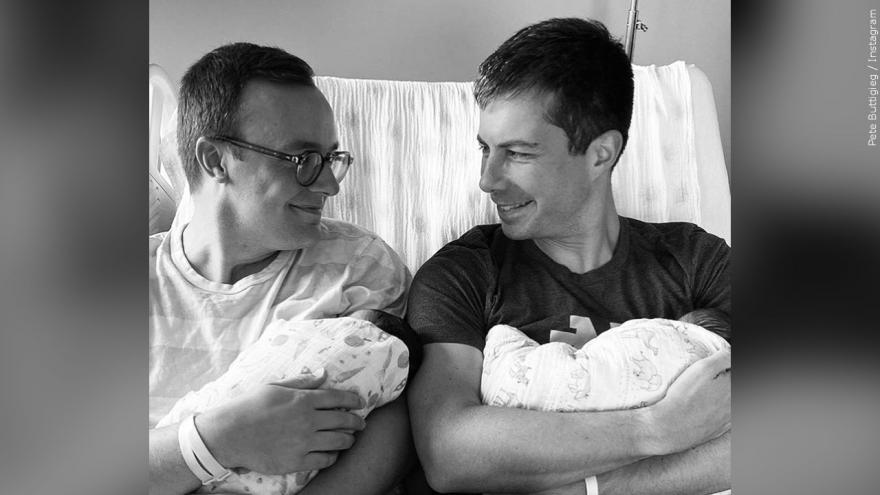 "After 3 weeks in and out of hospitals, 125 miles in an ambulance, and a terrifying week on a ventilator, Gus is home, smiling, and doing great!" Chasten Buttigieg wrote in a tweet. "We're so relieved, thankful, and excited for him and Penelope to take DC by storm! Thank you so much for all of the love and prayers."

Pete Buttigieg told CNN's Boris Sanchez on Saturday that his son is back to being himself.

"He's eating, he's smiling, and we're just so thankful for the great medical care that he got and the love and prayers and support that came our way during a tough stretch," the secretary said.

Buttigieg said later on Fox News that both of his children were in the hospital recently.

"Actually, both of them were hospitalized with a respiratory virus -- not Covid, but another one that if you or I got it, it'd be like a cold, but a premature child gets it, it's serious business," he told Fox News' Neil Cavuto. "She got better, he got worse, and we went through something that you wouldn't wish on any parent, but again, the best thing, the best news is they're home and doing great."

The secretary said in August that the couple was close to adopting, and in September they announced the birth of their twins, Penelope Rose and Joseph August.

Sunday, Chasten Buttigieg posted photos to Instagram of the twins on Halloween, which featured both newborns dressed as traffic cones, an apparent nod to Pete Buttigieg's job and the administration's infrastructure proposal.

"As you can see, we're spending this Halloween in the hospital. Gus has been having a rough go of it but we're headed in the right direction," the post read, referring to a photo of the couple with their son in the hospital.

The secretary had faced criticism from some conservatives for his decision to take leave following the twins' birth, but defended it last month in an interview with CNN's Jake Tapper, saying he wouldn't apologize for taking leave to care for his children, who were born prematurely.