Petitions for George Floyd and Breonna Taylor are the most signed pleas of all time at Change.org 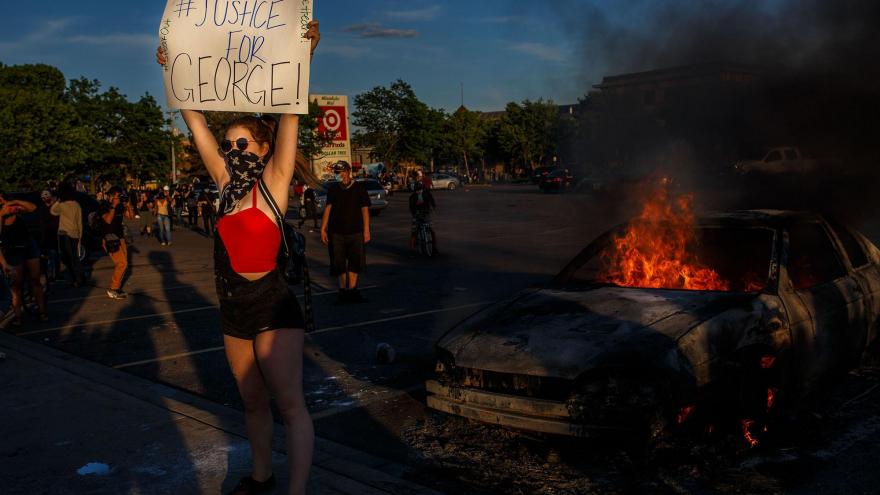 A protester holds a sign "Justice for George" near the Third Police Precinct on May 28, 2020, in Minneapolis, Minnesota, during a demonstration over the death of George Floyd.

(CNN) -- It's been a challenging year: a global pandemic claimed millions of lives, a national reckoning on race put a spotlight on police brutality in minority communities and a fraught presidential race dragged on for days after Election Day before a winner emerged.

As people witnessed these historic events, many used social media to express their frustrations. Some took to the streets in protest. Others decided to start petitions on sites like Change.org to raise awareness of issues important to them.

"2020 has been a historic year in many ways, and it was no different on our platform," said Michael Jones, managing director of campaigns at Change.org. "Hundreds of millions of Americans came to Change.org to sign petitions on the most important issues affecting them this year."

The organization saw a significant jump in petitions that were created and signed. It also saw a spike in campaigns that were declared victories because they accomplished their goals.

"This year, petitions calling for justice for George Floyd, Breonna Taylor and Elijah McClain broke records, with all three becoming Change.org's most-signed petitions of all time," the group said in a news release.

George Floyd, a 46-year-old unarmed Black man, died in an encounter with Minneapolis police on May 25 after a police officer knelt on Floyd's neck.

The incident sparked nationwide protests and renewed calls against police brutality and racism around the world.

A petitioner listed as Kellen S. by Change.org launched a plea calling for Minneapolis Mayor Jacob Frey and Hennepin County Attorney Mike Freeman to fire and charge the officers involved.

All four former police officers in the Floyd case face charges and will stand trial in 2021. So far, more than 19 million people have signed the petition, making it the biggest in Change.org's history.

The petition also led to a collaborative project between the George Floyd Foundation and Change.org. That resulted in a hologram of Floyd over a statue of Robert E. Lee in Virginia as a "symbolic call to continue the fight for racial justice," according to the project's organizers.

Breonna Taylor, a 26-year-old EMT and aspiring nurse, was killed by officers with the Louisville Metro Police Department after a raid on her home on March 13. The police officers involved were executing a no-knock warrant in a narcotics investigation.

Loralei HoJay, a 19-year-old student from Fort Lee, New Jersey, launched a petition calling for justice in Taylor's death. The 11.4 million people who have signed her plea represent the second highest number ever for a petition at Change.org.

In June, the Louisville Metro Council passed 'Breonna's Law,' which bans no-knock warrants. Other states and cities -- including Virginia and Memphis, Tennessee -- have followed suit.

In late September a grand jury brought three charges of wanton endangerment against one of the three police officers involved, but none was charged with Taylor's murder.

The social media outcry following the police killings of George Floyd and Breonna Taylor reinvigorated interest in the death of a 23-year-old Black musician in Aurora, Colorado. Elijah McClain died in August 2019 after a confrontation with Aurora police officers.

Saraya Hamidi started a petition calling for justice for McClain's death. More than 5.6 million people have signed the petition so far.

McClain was stopped as he walked home from a nearby convenience store, after a 911 caller had described a "suspicious person," according to a police overview of the incident. He began to resist officer contact, which led one officer to place him in a choke hold.

McClain briefly lost consciousness, according to the report.

When paramedics arrived on the scene, they gave McClain the drug ketamine to sedate him, which led to his heart attack, according to a letter from the Adams County District Attorney. He was declared brain dead three days later.

The officers involved were reinstated after initially being placed on administrative leave, as prosecutors declined to file charges.

Ahmaud Arbery, a 25-year-old Black man, was shot and killed on February 23 while jogging in southern Georgia.

A father and a son were arrested in May -- three months following the fatal shooting and after a 36-second video of the incident went viral. They now face murder and aggravated assault charges for Arbery's killing, according to the Georgia Bureau of Investigation.

In May, people around the world commemorated Arbery's birthday by running 2.23 miles.

A petition seeking justice for Arbery's death has garnered 3.9 million signatures and is one of the first racial justice petitions to go viral on Change.org.

The death of basketball legend Kobe Bryant and his daughter, Gianna, sent shock waves across the nation. The pair were among the nine people killed in a helicopter crash in southern California on January 26.

Bryant played his entire professional career with the Los Angeles Lakers and won five NBA championships as well as two Olympic gold medals. He retired in 2016.

A Change.org user listed as Nick M. launched a petition to "immortalize" Bryant by updating the NBA logo with his silhouette. So far, the petition has more than 3.2 million supporters.

Snoop Dogg, Justin Bieber and Naomi Campbell are some of the celebrities who have thrown their support behind the suggested change.

Jose Cardenas started a petition to designate the Ku Klux Klan as a terrorist organization.

Cardenas' petition started to gain traction during the George Floyd protests, when conversations about race were elevated to the national stage. So far, more than 3.1 million people have signed the petition.

Earlier this year, health care systems were strained by the influx of patients suffering from the coronanvirus. Hospitals were packed -- sometimes beyond capacity -- and medical professionals faced personal protective equipment shortages as they worked day and night to treat patients.

Three physicians -- Dr. Milla J. Kviatkovsky, Dr. Constance Chace and Dr. Supraja Thota -- launched a petition calling on the government to tap into the Strategic National Stockpile for N95 masks and to urge the public and private sector to increase production of PPE.

The petition has garnered over 2 million signatures.

Denver restaurant owner Stephanie Bonin is one of millions of business owners around the country struggling to keep their doors open.

Coronavirus restrictions have put businesses like hers in a tough financial situation, as states implement measures like reducing indoor dining capacity and issuing stay-at-home orders.

That is why Bonin took to Change.org to demand that Congress issue $2,000 per month to every American adult. Her petition has gained nearly 2 million supporters.

So far, 110,000 restaurants have permanently closed this year, according to a survey by the National Restaurant Association. The group is pleading with Congress to pass a stimulus bill to help struggling restaurants.

In April, the United States Postal Service told Congress it would "run out of cash" without financial assistance.

At the time, the Trump administration rejected any notion of direct funding for the Postal Service.

Trump's actions prompted Mike Hidalgo to launch a petition to save the USPS. The petition, which has amassed 1.5 million signatures, urges people to contact their representatives and voice their support for measure that could help fund the agency.

Calls to cancel student loan debt are growing louder as President-elect Joe Biden prepares to enter the White House. Student loan borrowers haven't made payments since March as part of a federal pause on loans. But that relief program is set to expire on January 31.

Biden has publicly backed canceling $10,000 in federal student debt, but some Democratic leaders in Congress are pressuring him to cancel more debt by executive action.

Alan Collinge, co-founder of the organization Student Loan Justice, has a proposal that goes one step further. His petition calls for the President and Secretary of Education to issue an executive order canceling all federally-owned student loans to stimulate the economy.

"Nothing would be added to the national debt, and no tax appropriation would be needed," the petition reads. "This is, by far, the least expensive, and most expedient way to inject trillions into the economy."