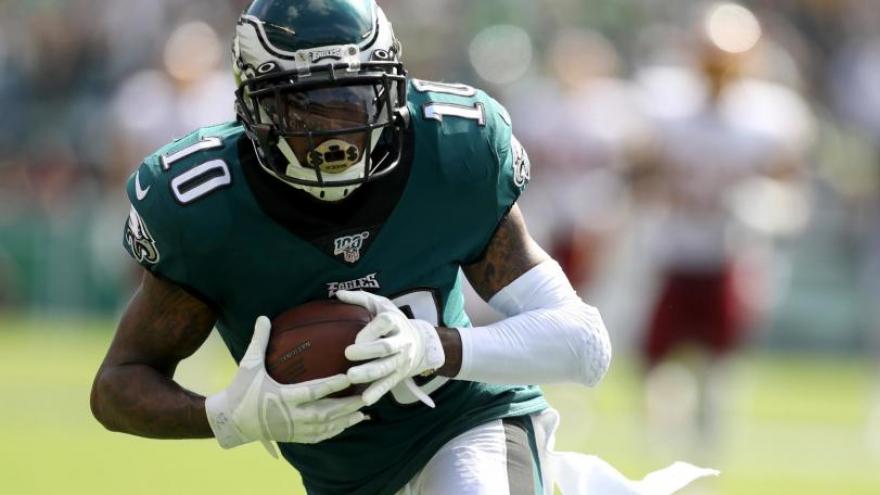 The Philadelphia Eagles announced that the team has "penalized" wide receiver DeSean Jackson for conduct detrimental to the team after Jackson shared a series of anti-Semitic Instagram posts.

(CNN) -- The Philadelphia Eagles announced on Friday that the team has "penalized" wide receiver DeSean Jackson for conduct detrimental to the team after Jackson shared a series of anti-Semitic Instagram posts.

"Today we have penalized DeSean for conduct detrimental to the team, He accepted these consequences and apologized," the Eagles said in a statement posted on Twitter.

The Eagles did not elaborate on what "penalized" meant. Jackson could not be immediately reached for comment.

Last weekend, Jackson was met with harsh criticism after posting a quote, falsely attributed to Adolf Hitler, saying that Black people were "the real Children of Israel," and that White Americans would be terrified to know that they have been "mistreating and discriminating and lynching them."

According to Snopes.com, the passage is often quoted by those arguing that Hitler was not racist.

Jackson later apologized for his post saying, "I just want to first off extend an apology on behalf of me and what I stand for, because you know, I'm one that's fair and I never want to put any race down or any people down. I really didn't realize what this passage was saying."

"Hitler has caused terrible pain to Jewish people like the pain African-Americans have suffered. We should be together fighting anti-Semitism and racism. This was a mistake to post this and I truly apologize for posting it and sorry for any hurt I have caused."

The team "had a number of constructive conversations over the last few days, not only with DeSean Jackson, but also with many other players, members of the organization, and leaders in the community. That has led us to the point where we and he are ready to take the next steps," according to the team's statement.

"We have discussed a concrete plan for how we and he can heal moving forward. He understands that in order to remain on the team, he must also commit to supporting his words with actions. We have been encouraged by his desire to educate himself, but we all understand that there is still a lot of work to be done."