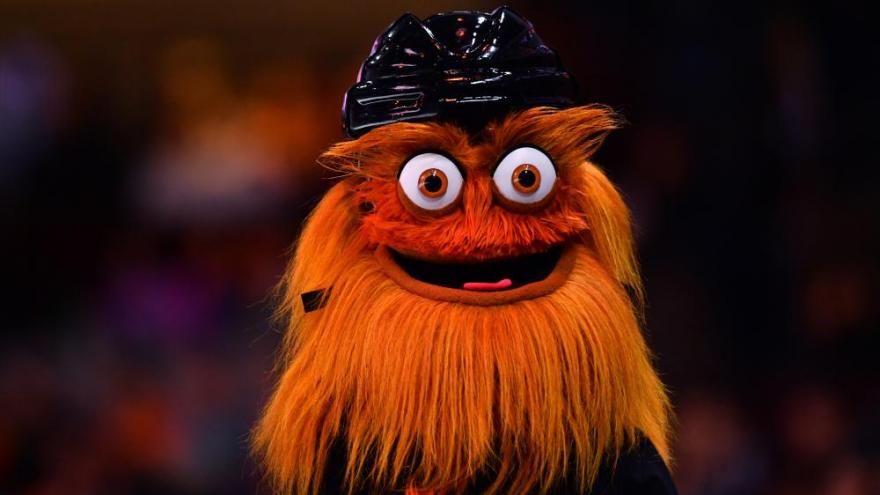 Gritty is a furry monster that debuted as the Philadelphia Flyers' mascot in 2018.

(CNN) -- Philadelphia Police are investigating a man's claim that Gritty, the mascot of the Philadelphia Flyers hockey team, punched his teenage son in the back.

The Flyers have repeatedly denied his claim.

The alleged incident occurred in November while Brandon and his father waited to take a Christmas card photo with the mascot, the man said. After the picture was taken, the teenager tapped the mascot on his black helmet three times, his father said. That's when, the lifelong fan alleged, Gritty blew a fuse.

The mascot got out of his chair, ran after Brandon and punched him in the back, Greenwell said. Upon a trip to the doctor, Greenwell said, he saw a "red, swollen" bruise where Brandon said Gritty had punched him. "My son could've been crippled from it," he said. "It's lucky that he's OK."

He waited to alert Flyers officials about the incident until the next morning, asking for footage of the incident, he told CNN. But Comcast Spectacor, the company that owns the Flyers, said none existed.

In a statement to CNN, the Flyers denied Greenwell's account of the dispute.

"We took Mr. Greenwell's allegations seriously and conducted a thorough investigation that found nothing to support this claim," Peter Ranere, a Comcast Spectacor spokesman, told CNN.

"I never got an apology. They never offered to pay my son's medical bills," Greenwell said.

"It was an assault on a minor from an adult," he added. "They tried to brush it under the rug."

The Flyers did offer to sit Brandon on the players' bench during warm-ups before a future game, The Philadelphia Inquirer reported, but the father told CNN that gesture was too little, too late.

Philadelphia Police Officer Tanya Little confirmed to CNN the department is investigating a reported "physical assault" that allegedly occurred during a photo shoot at the Wells Fargo Center between a 13-year-old boy and Gritty.

That investigation is ongoing.