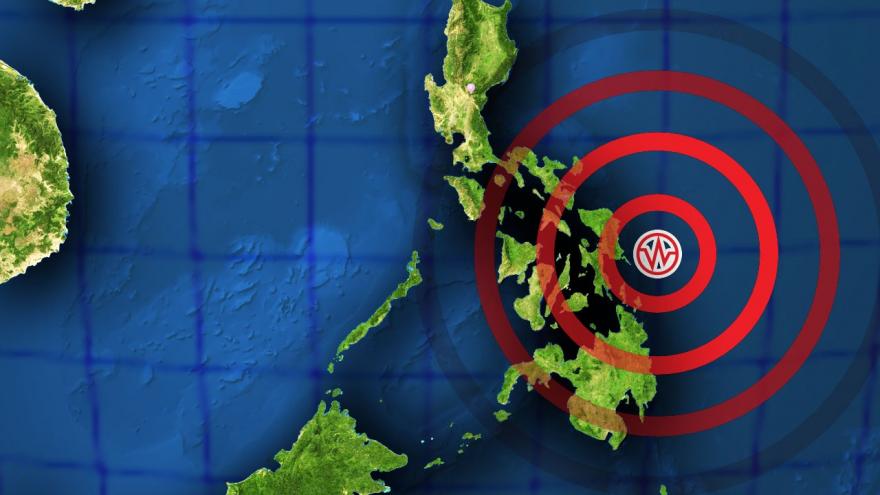 (CNN) -- A 6.1-magnitude earthquake struck near the town of Bodega on the Philippine island of Luzon on Monday, according to the United States Geological Survey (USGS).

Pampanga Governor Lilia Pineda said at least eight people in the province were killed in the quake, CNN Philippines reported. The earthquake could be felt in the capital of Manila as well as other parts of Luzon.

CNN Philippines said that at least 52 aftershocks have been recorded.

Jaime Melo, president of the Clark International Airport Corporation, said seven people suffered minor injuries when part of the ceiling at the check-in lobby of a passenger terminal collapsed, according to the Philippine News Agency.

The Philippines' Department of Transportation earlier announced that operations at the airport would be suspended for 24 hours due to the damage.

Local budget airline Cebu Pacific Air announced that it had canceled six flights scheduled for Monday evening as a pre-emptive measure. The airline said it would allow passengers on affected flights to get a full refund or re-route their flights via Manila.

In Manila, video emerged of water cascading from a penthouse swimming pool to the streets below as the quake shook the city.

Skyscrapers swayed from the force of the quake, causing frightened office workers to flee the high-rise buildings in the capital.

The National Grid Corporation of the Philippines is assessing the extent of damage on transmission lines in Luzon, which caused power outages in parts of the island, according to the Philippines News Agency.

Operations at the Ninoy Aquino International Airport, which serves Manila, are continuing normally, the Department of Transportation said.