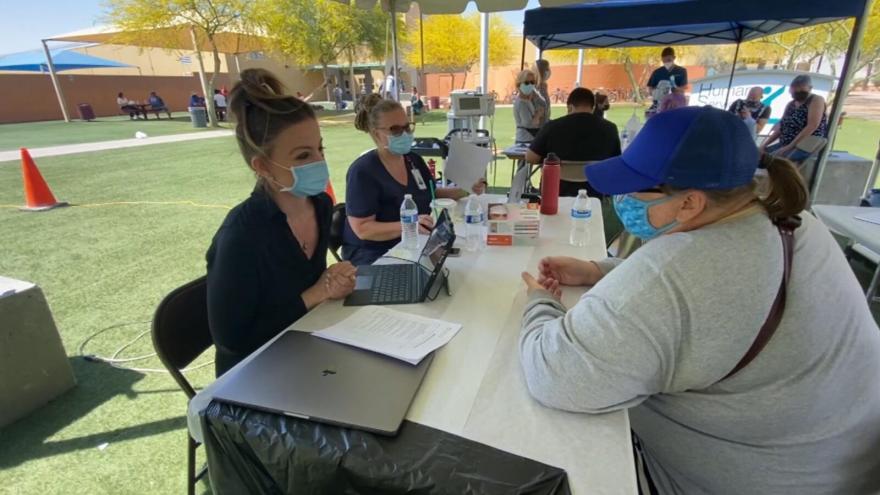 Alisha Crabtree, a physician assistant at Circle the City, sits across a table from Karen Williams shortly after Williams received her vaccine.

(CNN) -- More than four months after the first coronavirus vaccine hit American arms, a week-long drive to vaccinate the homeless against Covid-19 is underway in Phoenix.

With the goal of vaccinating 500 people in a five-day period that ended on Friday, it's a project that builds on the work of Phoenix-area nonprofits to care for the homeless during the coronavirus pandemic.

Circle the City, a nonprofit that provides healthcare to the homeless, has teamed up with the Maricopa County Department of Health Services and the local nonprofit Human Services Campus to make the drive possible.

But it's been an ongoing effort.

Marty Hames of Circle the City said the organization had successfully administered 2,200 vaccine doses before the week-long drive began.

"I go down to the homeless encampments frequently and I'm noticing more and more people on the street saying they have gotten their vaccines," Hames said.

Although Circle the City has been vaccinating homeless people since mid-January, this drive is the first week-long event targeted at the homeless population in Arizona.

The state had joined other sunbelt states as a Covid-19 hot spot during the summer of 2020, and the homeless population there was not left unaffected.

In May 2020, Maricopa County made the decision to lease The Phoenix Inn, a vacant hotel, to house and care for homeless individuals battling Covid-19.

"To date, we have provided healthcare and a safe place to quarantine to approximately 1,300 homeless people in Arizona," Hames said.

For the homeless, the chance to get vaccinated has been met with widespread gratitude.

"I didn't think ever I would get me a vaccine shot," said Sandra Almos, 51, who has been homeless for seven weeks after being evicted from her home.

Relief is also abundant among the homeless community.

Alisha Crabtree, a physician assistant at Circle the City, said she had high-risk patients who "were scared" before the vaccine even rolled out. "They would say to me, 'well I'm not gonna have access,' or, 'I won't get the vaccine.'"

But simply having the vaccine available isn't always enough. The lack of personal transportation and hot weather often make it difficult for the homeless to go out and get a shot.

"There's a lot of limitations, you know, with trying to get medical care when you're homeless," said Karen Williams, who has been homeless for one month. She got the Moderna shot on Tuesday. "It's just more convenient for stuff like this to come to us."

Toni Petersen, 61, who has been homeless for three weeks, agreed that getting to a vaccine site is the hardest part.

The convenience of facilitating vaccine access to the homeless is not lost on those administering vaccinations.

Crabtree said she grew up underserved and without access to healthcare in a community now served by Circle in the City's mobile units.

"[The homeless] can't make appointments, they can't sit in long lines, they can't go through drive-thrus in cars that don't exist for them," Crabtree said. "And so, it is a privilege for me to serve in that way."

Almos received the Johnson & Johnson vaccine on Monday, one day before the single-dose vaccine's rollout was paused for Americans due to some cases of rare but severe blood clots reported after receiving the shot. Almos said on Tuesday that she was feeling "very great" and not feeling any side effects.

"As of Tuesday, we are only administering the Moderna vaccine," Hames said. She said the Maricopa County Department of Health Services has provided an additional 250 Moderna doses for the drive itself.

The pause on the Johnson & Johnson vaccine hasn't seemed to slow the drive. Hames described vaccinations as "continuing at a steady pace," and added that the pause "did not seem to affect people wanting the Moderna vaccine."

The nonprofit will be offering the vaccine to cities within Maricopa County near Phoenix including Glendale, Sunnyslope, Mesa and Avondale beginning on Thursday.

Hames said they are continuing right on track to reach their goal.

"It has been an immensely successful week. I am exhausted, but I go to bed every night knowing we have made the vaccine available to people who otherwise would have little chance of getting it."