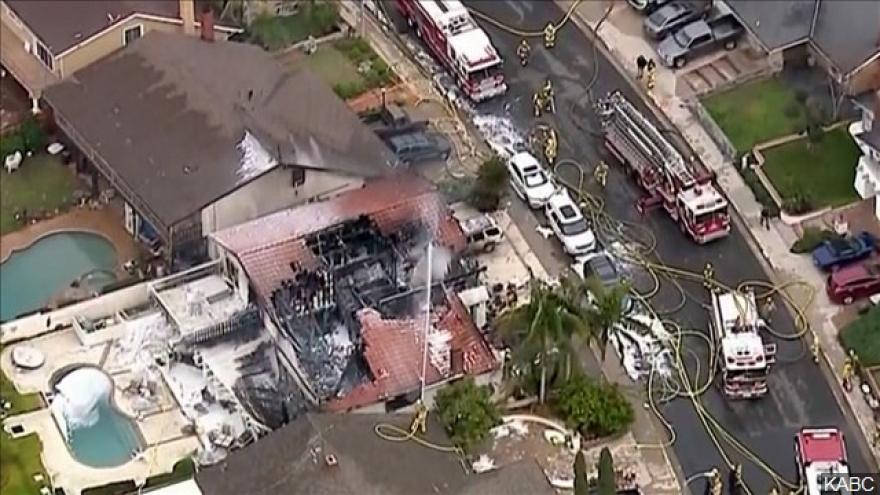 (CNN) -- The pilot of a twin-engine plane that broke up in the sky and slammed into a Southern California home was carrying a fake police badge before the fatal crash, law enforcement officials said.

Antonio Pastini, 75, of Gardnerville, Nevada, was identified as the pilot on Monday. Authorities initially believed he was a former police officer but have since then learned he was not affiliated with the Chicago Police Department.

"We were contacted by the Chicago Police Department and they reported that they have no record of (Pastini) him as being a former officer," said Carrie Braun, a spokeswoman with the Orange County Sheriff's Department.

A fake police badge and other documents were found after the crash, Braun added.

The pilot and four other people died Sunday when the plane plummeted into a Yorba Linda, California home.

The coroner is in the process of identifying the other four victims and notifying the next of kin, Martino said. The four dead include two males and two females.

"Unfortunately, the condition of the additional four deceased will require the use of additional measures, such as DNA, to obtain official identification," he said. "This type of identification can take time."

The plane's flaming wreckage injured three other people, damaged houses, and left debris over four blocks in the community of Yorba Linda, about 33 miles south of Los Angeles, authorities and affiliate reports said. 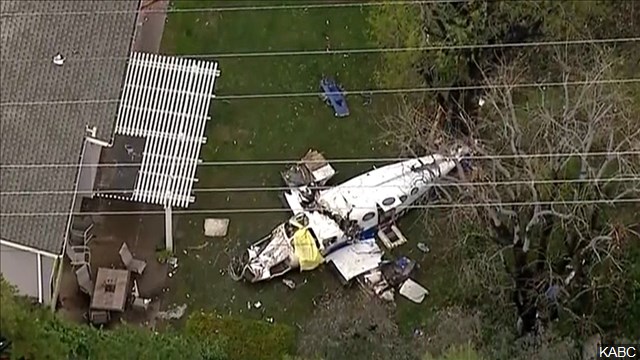 What's left of the plane in Yorba Linda, California. KABC

At a news conference Monday, NTSB lead investigator Maja Smith said Pastini left Fullerton Municipal Airport in a 1981 Cessna 414A around 1:35 p.m. Sunday. It was not clear what his destination was, Smith said. According to preliminary radar data, the plane made a left turn, climbing to 7,800 feet, and went 10 miles out before making a "rapid descent" into the neighborhood, said Eliott Simpson, an NTSB accident investigator. He said that, based on video he'd seen and the debris field, the plane appeared to have broken up in the air.

Witnesses Smith spoke with said they saw a plane coming out of a cloud and it was still in one piece.

"And then they saw the tail breaking off, then wings breaking off and then subsequent smoke before the airplane impacted the ground," she said.

The debris flew across about four blocks in the area, covering about 15 to 16 homes, Smith said.

The Orange County Fire Authority said the "debris ignited a massive inferno at one home, quickly engulfing the two-story structure before spreading to a second home," KTLA reported. The station said video on social media captured images of "panicked residents rushing about the street."

One of the challenges for NTSB, Smith said, was collecting the debris because of how widespread it is.

"Our focus was getting all those parts collected," she said, adding that the wreckage will be taken to Phoenix for examination.

The plane's maintenance records have not been recovered yet, Smith said.

Smith said the NTSB will also look at Pastini's pilot history, medical records and flight experience. They'll also be looking at the structural integrity of the plane and where and why it broke up. The environmental impacts will also be examined.

The command post set up at Glenknoll Elementary School, which led to the school being closed on Monday, was relocated Monday afternoon. Martino said the school will reopen Tuesday.